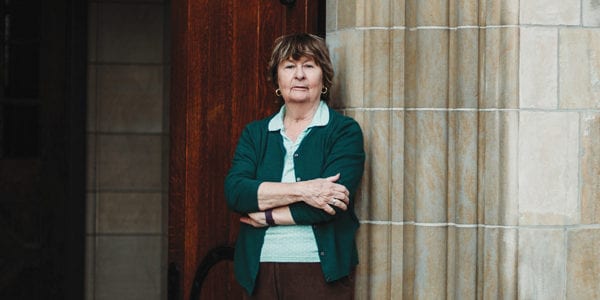 Knock on the door of Maureen Jennings’s house, and expect to be greeted by Murdoch, a whip-thin grey Labradoodle with soulful eyes. Jennings laments that he isn’t the brightest, but Murdoch performs tricks, like barking answers to basic arithmetic questions.

Jennings’s Victorian brick house is standard fare in her charming Toronto neighbourhood. Originally a farming community, the former village was annexed by the city of Toronto in 1888, seven years before the setting of her debut mystery novel, Except the Dying (1997), which introduced the world to her dog’s fictional namesake, detective William Murdoch. Christie Pits is nearby, a former quarry turned public park named after biscuit mogul William Mellis Christie, who co-founded the Christie & Brown Cookie Company in 1861. A racially motivated riot in that park’s history plays a role in Jennings’s new novel, Heat Wave, the first title in her planned Paradise Café trilogy, and the first with her new publisher, Cormorant Books.

Normally, this slice of history wouldn’t deem a mention, but this is Maureen Jennings. Her Murdoch Mysteries series and its wildly successful television adaptation have brought Toronto’s Victorian-era past to millions. A meticulous researcher blessed with deep curiosity, Jennings, 79, finds inspiration in all sorts of places: in archives, old newspapers, and in the antiquarian books she orders online. Even the streets act as a reference library of sorts.

“I like to be in the place,” she says. “I like to see the buildings and try to turn into the life of the times.”

It was Murdoch (the character, not the dog) who led Jennings to Paradise Café. Her last title, 2017’s Let Darkness Bury the Dead, leaps ahead from the late 1800s to 1917 following the detective’s retirement and the arrival of Murdoch’s estranged son, Jack, who returns home from France after being wounded in the Battle of Passchendaele.

Jennings says she felt traumatized by her deep readings into the experiences of prisoners of war. “I got so immersed in that material, which was life-changing, searing,” she says. But instead of taking a break and returning to the comfort of the Victorians, or even back to 1917, Jennings pushed her timeframe and characters ahead to 1936, a pivotal year in Canadian history as the country prepared for another war.

She was intrigued to learn that many of the young men who nearly starved to death during the war would spend hours talking about food. Jennings is not a foodie, but she loves conversations sparked by talk of favourite meals. And so she created a fictional café, run by four former POWs, to anchor her new story.

Jack Murdoch, now a detective, makes a brief appearance, but the real star of Heat Wave is Charlotte Frayne, a sharp-minded private investigator undercover on her first case to draw out a thief who has been stealing from the café. It’s a big break for Charlotte, who inherits the case after her boss, T. Gilmore, is suspected of viciously attacking his wife. Charlotte believes in Mr. Gilmore’s innocence, and that the assault is related to an anonymous anti-Semitic letter he received earlier that day.

The story takes place during an intensely sweltering heat wave, which only adds to the book’s noirish atmosphere. As the plot progresses, it becomes clear the cases are connected, not only to each other, but to post-Depression fears of a communist revolution and the simmering racial tension in Toronto, three years after a baseball game at Christie Pits turned into a six-hour violent melée when a group of young men taunted the crowd by waving a sheet painted with a swastika.

Jennings relished the experience of writing a female character in the first person and uncovering details from this period in Toronto’s history. But her publisher at the time did not find the story as fascinating – or sellable.

For close to 20 years, Jennings was published in Canada by the storied house McClelland & Stewart. M&S went through two ownership changes during that time (it is now an imprint of Penguin Random House Canada). Although she worked with several editors, Jennings found the greatest stability with Ellen Seligman, who died in 2016, a year before Let Darkness Bury the Dead was released. Jennings says, “I know that Ellen, as well as liking her very much, was very much on my side.”

Jennings pitched the first Paradise Café title to M&S publisher Jared Bland, who felt it wasn’t the right fit. Jennings speculates that if she had returned to Victorian-era Murdoch, she might still be with M&S, but she was already too invested in this new project to let go.

Devastated, Jennings called another publisher she knew, Marc Côté, head of the small press Cormorant Books. Although she doesn’t recall this anecdote, Côté remembers a conversation with Jennings at an event about a decade ago when he told her that if she were ever looking for a new publisher, he would welcome her with open arms.

Jennings sent Côté her proposal and first chapter. “She treated this as though she were a first-time author,” he says.

Cormorant acquired world rights to the new book, anticipating two more titles to follow. Rights to the backlist of 14 titles reverted back to Jennings, who plans to sell them to Cormorant later this spring. Jennings’s husband, photographer Iden Ford, will continue on as her business manager and agent.

Murdoch books were traditionally fall releases, but Côté moved up the pub date for Heat Wave to the less-crowded spring season in hopes of attracting more attention. The release also coincides with Jennings’s appearance at Vancouver’s Left Coast Crime conference in March, where she is the Canadian guest of honour. He knows he doesn’t have the reach or deep pockets of M&S, but Côté is confident that he can provide a good home, in part because both Jennings and Ford, whom he calls an “amazing team,” are fully committed, bursting with ideas about how to promote the new book and the backlist.

“My only concern is that we are able to place thousands and thousands of copies out there in the marketplace,” says Côté. “And that we will sell them all.”

It is a tricky time, sales-wise, for classic mystery writers. The domestic thriller market continues to dominate, creating stars out of Canadian authors like Shari Lapena. Then there’s the question: will Murdoch fans embrace Charlotte Frayne? Jennings has debuted characters before. Her four-title Tom Tyler series focused on a rural British detective during the Second World War, and a duo of contemporary mysteries featured forensic profiler Christine Morris.

Yet there’s no denying that any new Jennings book – regardless of who publishes it – will both benefit from and fall under the shadow of the Murdoch Mysteries television series.

Murdoch mania started about 17 years ago, when Jennings’s first three books were recommended to Shaftesbury Films founder and CEO Christina Jennings (no relation). The head of the Toronto production company was busy, and the books sat ignored, until a director spotted the stack on Christina’s desk and suggested she take a read.

Shaftesbury optioned the first three titles as TV films before signing the series. Except the Dying, Poor Tom Is Cold, and Under the Dragon’s Tail ran on Bravo Television in 2004–05. The subsequent TV show took a more light-hearted approach than the grittier films, buoyed by the charm of Yannick Bisson as its lead.

Christina was drawn to the books’ outsider protagonist, a kind-hearted Catholic detective working in a Protestant town. Timing also played a role in Murdoch Mysteries getting picked up by CBC Television, where it remains the network’s most popular show. There weren’t many period dramas at the time, let alone turn-of-the-century cop procedurals, and public interest in forensic science was high, thanks to the campy CSI franchise.

“Murdoch was ahead of himself, using science to help solve crimes versus fists or muscle,” says Christina. “I liked what Maureen had done, taking us back to the beginnings of forensic science and these inventions that have become very much mainstream now in policing.”

It’s difficult to put a finger on exactly when Murdoch Mysteries shifted from cozy entertainment to cultural phenomenon. Now in its 12th season, the show runs in 110 countries and territories. There are fan clubs and fan-fiction websites. Toronto’s historic Casa Loma hosts a Murdoch-themed escape room. Horror author Anne Rice has praised the show on social media, sharing that every evening she takes a break from her own work to watch at least two episodes.

“Everyone likes to solve a good puzzle,” says Christina. “And, if along the way you have some laughs and there’s some heart, I think that strikes a universal chord with people.”

Jennings isn’t involved in the show’s daily production, but she acts as creative consultant and writes one episode per season. She puts the same rigour into the show as she does her books.

“I knew [Maureen’s] attention to detail and research, and her fascination with the time,” says Christina. “She was the creator of Murdoch, and so it was very important to have her involved from day one.”

Earlier in the day, Jennings had been thinking about her childhood imagination. It wasn’t exceptional, but an active inner world kept her afloat through “some miserable times.”

Jennings was born in 1939 in Birmingham, England. Her father, whom she never really knew, died in action during the Second World War. She describes her mother as a typical working-class British woman. An attractive, smart but not sophisticated, lonely widow, who never quite understood her bookworm of a daughter.

“Books were over there, and that put me over there,” says Jennings. “It wasn’t ostracizing me. It’s just that it was a world she would never enter into, and didn’t want to, as far as I know.”

While in her late teens, Jennings, along with her mother, immigrated to Windsor, Ontario, where she attended university for psychology and philosophy. In 1961, she moved to Toronto to study for her masters in English literature. Teaching at Ryerson Polytechnical School in the late 1960s, she was on faculty alongside an eclectic group of writers, including Gary Geddes, Graeme Gibson, and the late Eric Wright, whom Jennings considers a mentor. She then trained as a psychotherapist but gave up her practice in her 50s to pursue writing full time.

An avid mystery reader who would devour several books a week, Jennings – who has already mapped out the second Paradise Café title, which also takes place close to home – always knew her destiny was to write genre novels. “People sometimes say writing mysteries must be hard. No, I think writing an uncharted literary novel is hard,” she says. “With mystery, you have a track to run on, whatever you do with it, and I like knowing where I am going.”