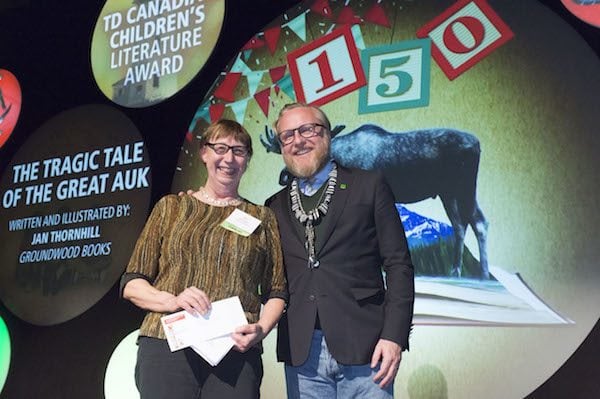 During her acceptance speech for the TD Canadian Children’s Literature Award on Nov. 21, Jan Thornhill thanked the jury members for choosing a work of non-fiction for the $30,000 prize, saying, “as much as we all need stories, we all need facts – today more than ever.” She also thanked TD for the “big beautiful cheque,” noting it’s two times what Canadian children’s writers make in a year.

The recognition was extra special for Thornhill, considering The Tragic Tale of The Great Auk (Groundwood Books) – a hybrid non-fiction, picture-book history of a bird that’s been extinct since 1844 – marks her return to illustration after 15 years. Thornhill had a sarcoma in her wrist that made the traditional method of hand-painting illustrations too painful. For The Great Auk, and Thornhill’s upcoming book The Triumphant Tale of the House Sparrow, she used a new digital method – which has its benefits: “I don’t have to drink my paint water anymore, which is something I used to do all the time,” Thornhill told Q&Q after the ceremony. “At the end of the day my paint water always looked like coffee with milk in it and I would drink that and stick my paint brushes into my coffee.”

Thornhill’s joyous win capped an emotional night, that began with host Shelagh Rogers saying a few words about Groundwood publisher Sheila Barry, who died only the week before the event. The audience immediately rose for a standing ovation, and throughout the night authors and illustrations made tributes to her in their acceptance speeches. “When I was pitching this book at Groundwood,” Thornhill said after her win, “I told Sheila of all the tragedies that befell the great auk, ending with ‘this could be the most depressing book for children ever written.’ And Sheila’s eyes twinkled.”

Here is a full list of winners of the 2017 Canadian Children’s Book Centre Awards.