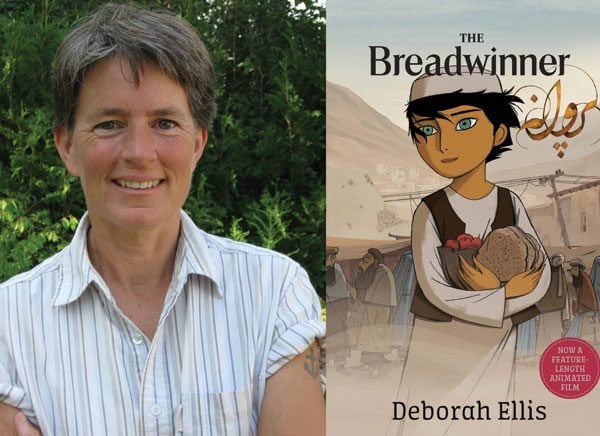 Deborah Ellis doesn’t have WiFi at home. When the author needs to check her email, she walks to her local library, in Simcoe, Ontario, and when it’s time to send a manuscript to her publisher, she does it from Staples. She also doesn’t have a cellphone, so she didn’t take any selfies with Angelina Jolie when the two women walked the same red carpet at this year’s Toronto International Film Festival. Not that Ellis is a selfie kind of person.

Living like it’s 1997 didn’t stop Ellis from having a productive and newsworthy 2017. The veteran kidlit favourite released Sit, her second collection of short stories; interviewed 30 Canadian youth for an upcoming non-fiction title about Canada’s criminal justice system; and attended the TIFF premiere of The Breadwinner – the Jolie-produced animated adaptation of Ellis’s 2000 middle-grade novel, about a Muslim girl living under Taliban rule in Afghanistan. “It was a glamorous year for Deb, in a business that is not so glamorous most of the time,” says Sheila Barry of Groundwood Books, publisher of The Breadwinner, Sit, and Ellis’s next work. “But Deb is amazing every year. She writes fiction, non-fiction – her versatility is astonishing.”

Ellis never thought she’d see The Breadwinner on the big screen, after the rights were optioned nine years ago by Toronto film studio Aircraft Pictures. “A few of my books had been optioned, including The Breadwinner once before,” says Ellis, “but nothing had come of it and the option ran out. These folks at Aircraft kept plugging away and did some serious work to get it made.” The producers had initially intended the adaptation to be a live-action film, but eventually went in another direction. Ellis wrote the first draft of the screenplay, she says, “then they brought in a real screenwriter [Anita Doron] to do a job more suitable.”

Over the years Ellis would hear about how the film was progressing, from Nora Twomey of Cartoon Saloon signing on to direct to the addition of Jolie as executive producer last summer. Along the way Ellis read a draft of Doron’s script and saw a rough cut of the film at the Groundwood offices. This year it all culminated with the TIFF premiere and a fall release. Ellis is particularly excited about an online educational tool the filmmakers put together for use in schools across North America: “It will be interactive with the film and the book,” she says, “with the intention of getting kids to think globally, and about what their roles as individuals can be.”

Like any movie adaptation, there were plenty of cuts and changes from the book. Most strikingly, the novel is full of strong female voices and storylines, some of which are missing from the film – and in one case, a girl warrior character was changed to a boy in the movie. But Ellis wasn’t bothered.“I do believe they worked really hard to stay true to the heart of the story: that war is a great damn waste and it does terrible things to people and families – and we need to knock it off.”

There are traces of the same theme in Sit, in which the protagonists are children – including a refugee girl in Uzbekistan, a child labourer in Indonesia, and a father and daughter running from a nuclear accident in Japan – constrained by their circumstances and the adults around them. “These stories are really about power,” says Ellis. “How as kids and adults we often find ourselves in situations where we feel we don’t have any power. How do we cope when that happens? How do you keep yourself safe when the adults around you are behaving really badly?”

With her next book (still untitled), Ellis hopes to shine a light on the Canadian justice system from the perspective of this country’s young offenders. “The kids I met with talked a lot about loss in their lives,” says Ellis. “They felt they had been ground down, and lacked hope for the future. They talked about the need to be plugged in educationally, that they needed roads out of poverty, good family support, and good parenting. Man, do they ever have stuff to say to us. I think it will be a powerful book.”

Barry agrees. “I’m always impressed by Deb’s ability to dive so deeply into these incredibly difficult subjects. Her dedication to children’s rights and peace in the world against all odds is unrelenting.”