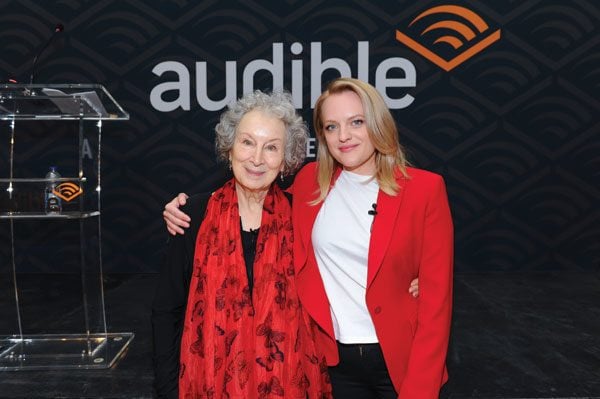 Margaret Atwood and Elisabeth Moss created quite the spectacle for Toronto commuters when the pair appeared at Union Station on Sept. 12 to promote the Canadian launch of Audible, the Amazon-owned audiobook platform. They performed a live reading from Atwood’s 1985 novel The Handmaid’s Tale, which was available free on Audible for a month, along with the award-winning novel Le mur mitoyen by Quebec author Catherine Leroux.

Approximately 300,000 titles are now available on Audible.ca, thousands of which are by Canadian authors and publishers (an exact number was not made available). To prepare for the launch, Audible acquired approximately 150 additional Canadian titles – a list dominated by multinational publishers, with some representation from independent presses such as ECW Press, House of Anansi Press, and Goose Lane Editions. The New Jersey–based company also announced a two-year sponsorship of the Scotiabank Giller Prize, with plans to record audiobook editions of previous award winners, like Lynn Coady’s 2013 story collection, Hellgoing (House of Anansi Press). Just weeks before Audible’s launch, ebook retailer Kobo announced its own foray into the audiobook subscription market. Tracy Nesdoly, Kobo’s vice-president of communications, says, “We’ll be adding lots of Canadian content, in partnership with our publishing partners.”

While this is good news for readers looking for more stories produced domestically – a 2016 Q&Q story about the rise of the format identified a lack of Canadian titles available to consumers – it is still too early to herald the audiobook version of Hollywood North. Andy Gaies, Audible’s chief content officer, said the company has no immediate plans to open a Canadian location or hire local staff, but will dedicate $12 million toward recording local talent, including live comedy and theatre.

Behind the scenes, Penguin Random House Canada was preparing for the demand with the formal launch of its own internal audiobook program. The publisher kicked off with 17 titles, including 2016 Giller Prize nominees Yiddish for Pirates, by Gary Barwin, and 13 Ways of Looking at a Fat Girl, by Mona Awad. The titles were produced in 10 studios across Canada, but according to PRHC audiobooks producer Ann Jansen, a new in-house recording space will also be utilized. “We’ll still be working with private studios across the country when we need to record authors in their hometowns,” Jansen says. And depending on “our level of production, we’ll still be recording books with partner studios in Toronto.”

By the end of the year, 60 PRHC audiobook titles – both backlist bestsellers and new releases – will be available from Canadian e-retailers, including Kobo, Audible, and iTunes. “Recordings done here in Canada will make up about half of our audiobooks list each year. In addition, there are titles for which we have audio distribution rights in Canada or North America, produced by our international colleagues at Penguin Random House, along with a few other audio publishers,” says Jansen. “In those cases, we buy the recording masters for sale in Canada. And we’re also selling some of our masters to publishers with rights in other countries. It’s a joint effort.”

It’s not just the multinationals that are reacting to the growing market, which in the U.S. enjoyed a sales increase of 20 per cent, or $1.77 billion (U.S.), in 2015 (Canadian numbers are not available). Last year, ECW and Coach House Books kicked off a program, funded by the Ontario Media Development Corporation, that would see 23 publishers producing new audiobook content, launching with Coach House’s Fifteen Dogs, the Giller Prize–winning novel by André Alexis. The original target for the year was 100 titles, but according to ECW co-publisher David Caron, that goal was slightly ambitious. Some of the 29 titles that have been produced to date include Jen Sookfong Lee’s novel The Conjoined (ECW); Jordan Tannahill’s play Age of Minority (Playwrights Canada Press); Lindsey Summers’s YA novel Textrovert (KCP Loft); Nick Wilkshire’s mystery Escape to Havana (Dundurn)*; and Teva Harrison’s graphic memoir, In-Between Days (House of Anansi), narrated by the author.

“There are more obstacles to scheduling between the narrators and the publishers than anticipated,” Caron says. “In rough numbers, we have one-third of the audiobooks fully produced and out into the world, another third in various stages of production, and the last third still to be cast and scheduled.”