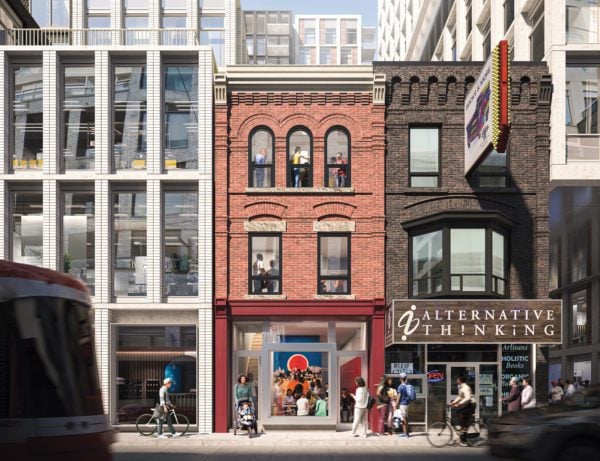 A rendering of The People’s Residence, the new home of A Different Booklist bookstore and cultural centre. (Ten 2 Four Architecture)

Toronto independent bookstore A Different Booklist and the Grammy-winning song “Who Let the Dogs Out” may not seem to have much in common. But when co-owner Itah Sadu realized the bookstore and cultural centre’s new home was previously a dog spa, she asked music producer Ossie Gurley, a community member credited with arranging that summer anthem, to write a song for the Bathurst Street space.

“If you know a man who has a Grammy in his home from that song, and he comes to your institution and sees it as his home, it would only be logical to say to that man, ‘Could you let the dogs out for us, and could you think of a song to take us in after you have let the dogs out?’” Sadu says. The result is a soca road march by Gurley that captures A Different Booklist’s imaginative spirit.

“When we played it, people lost their minds,” Sadu says, referring to the virtual event in June at which she shared the song. “We dared to imagine. What would be the point of being in the book world and doing the same things [as everyone else]? We sell books and we talk to people about books and literature because we dare to imagine.”

The new space, which is part of the City of Toronto’s Mirvish Village redevelopment project, “signals permanence” for both the bookstore and its cultural centre, The People’s Residence. Construction is slated to begin this year, with the move scheduled for fall 2022.

“The cultural centre is the organic expression that came out of the bookstore,” Sadu says. “We are in a moment where it’s important that we represent the change we see is being called for, and that is to build deeper roots.”

Sadu is excited that the bookstore’s new home and expanded cultural centre, which will continue to celebrate African and Caribbean heritage, will anchor the legacy A Different Booklist has created over more than two decades. Her early experiences in the industry weren’t always welcoming; people used to tell her that when they heard the word “different,” they thought of it in negative terms.

The People’s Residence will be a three-storey building designed to welcome visitors even before they’ve set foot inside, says lead project architect Judah Mulalu, principal at Ten 2 Four Architecture. Inside, the building’s three above-ground floors and basement will be dedicated to programming, with plans to include a drumming studio, an art gallery, a digital hub, and, of course, the bookstore. The result will be “a place where you can come in for 10 minutes and stay for 10 hours and feel very, very comfortable,” Mulalu says. “This kind of place doesn’t really exist for people of colour anywhere else, in terms of the breadth of programming that it offers.”

The City of Toronto owns the building, which is one of 24 heritage properties included in the redevelopment project, and ownership will be transitioned to A Different Booklist through a long-term lease, Mulalu says.

Sadu captures the potential of The People’s Residence with a story about how picture-book author Nadia Hohn first met the late Groundwood Books publisher Sheila Barry at A Different Booklist.

In 2011, Hohn attended a workshop on writing for children in the store’s backyard where she met Barry, who was then editor-in-chief of Kids Can Press. That low-stakes introduction to a key kidlit player is what the author says the expanded store and cultural centre can offer more of. “It can create space where people can have that first point of contact,” she says. Hohn asked for Barry’s email address, and two years later she pitched her the book she was working on. Barry acquired Malaika’s Costume for Groundwood, which has since published two more of Hohn’s books. This fall, Malaika’s Costume will be distributed to more than 550,000 grade one students across Canada for the 2021 TD Grade One Book Giveaway, which began last month.

“If behind that little bookstore, a little seed like that was planted producing this incredible moment of history, just imagine what four floors of a building [can do], how many stories we can tell, how many more Nadias, how many more Sheila Barrys,” Sadu says.

Realizing the vision of the project requires funds. To complement funding from project partners, including all three levels of government, a $5-million capital fundraising campaign is underway. Sadu encourages anyone who has launched a book at the store or otherwise had a positive experience there to get in on the ground floor and become a foundational donor by donating to the “buy a brick” campaign. “Book world, don’t disappoint,” says Sadu. “We are looking at you to take us home.”

Sadu is looking forward to being able to welcome people, as Gurley wrote in the building’s theme song, to “the jewel” on Bathurst.