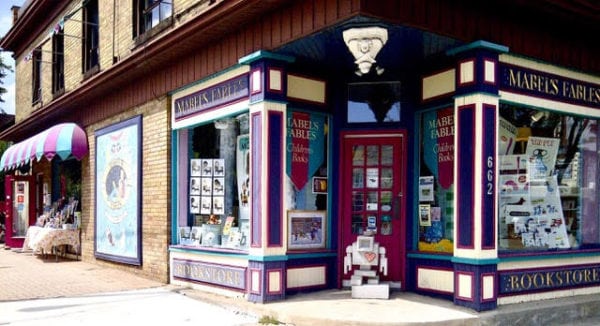 The news that Toronto’s beloved independent children’s bookstore Mabel’s Fables is facing a rent increase of 70 per cent, which would force it to shutter, has led to an outpouring of support. There’s a petition to sign, a community meeting to attend*, and endless posts on social media proclaiming its importance to its neighbourhood, city, and the country’s literary community.

Eleanor LeFave, owner of the 32-year-old bookstore, says she’s been in frustrating lease talks with Maple Venture Properties, the new owners, since the end of last year. At a recent book reading, she pulled aside her city councillor, Josh Matlow, to ask if there was anything that could be done. “Josh looked at me and said, ‘You’re not going anywhere,'” says LeFave. “The same thing happened with the Regent Theatre down the street. They were under pressure from their building owner and Josh organized a big meeting, the community showed up, and the landlord backed off.”

For the councillor, this is personal. “For people in our community, including my family, Mabel’s Fables is a landmark,” says Matlow. “It’s a really important part of our lives, an integral part of the character of Davisville and Mount Pleasant Village, and an iconic part of the streetscape. But it’s also important as one of Canada’s last remaining independent children’s bookstores.”

When Matlow pulled the petition together, which he published on his website, he knew it had to have a section for memories and stories about Mabel’s. “Within a day of posting we had over 1,600 messages. It’s visceral – it touches people’s hearts. Everyone has a story.”

Matlow’s next step is to hold a meeting on Tuesday, March 10, to come up with ideas for how to save it. “It’s in the spirit of an Amish barn-raising,” he says. “We don’t know the answers but we know that a place we love, run by people we love, is being threatened by a bully – a big company bully that wants to see Mabel’s pushed out and replaced by a condo.”

Matlow is inviting everyone to come, whether you’re a local, part of the children’s publishing world, or just care about Canadian books. He’s also invited city staff from the economic development, planning, and heritage departments to come and join in the discussion. “I found that, by taking this approach, you never know who’s going to walk in the door,” says Matlow, “whose knowledge or experiences  can contribute to solutions.”

LeFave can’t help feeling optimistic considering how the community is reacting. “My customers are all riled up,” she says. “One of them said when the bulldozer comes along she’s chaining herself to the store.”

Matlow points out that Mabel’s Fables has survived Amazon, the big box stores, and online shopping. LeFave adds that most recently they’ve weathered three years of transit construction outside their door (with two more years to go), which has impeded their visibility, decreased foot traffic, and made it nearly impossible for anyone to drive to the store from any direction. Yet LeFave says this is their biggest challenge yet. “Rent hikes are the biggest threat to all bookstores that are left in Canada.”

*Update, March 9: The community meeting has been cancelled after Matlow was forced to undergo isolation after coming into contact with an individual who has tested positive for COVID – 19 (Novel Coronavirus).