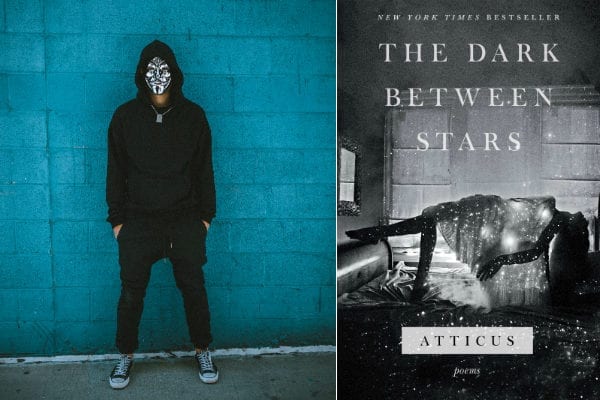 Without his mask, the pseudonymous poet Atticus, whose following on Instagram hovers just under a million, has a ruggedly handsome, actor-type look. His teeth have a porcelain glow and are framed by a robust blonde beard. Though in his 20s, the edge of his eyes show a faint crinkle.

The Phantom of the Opera he is not. Yet Atticus, who grew up in Vancouver, has built a career as a bestselling poet by reading for hundreds, mainly women in their teens and early 20s, from behind a mask.

Atticus has a stock answer as to why that is, one he shared with Q&Q at Simon & Schuster Canada’s Toronto headquarters. “The mask serves as a reminder to me to write with vulnerability,” he said.

One might argue that the mask is also part personal branding exercise: Atticus has been outed as a minor celebrity in his own right recently, an experience that has brought him enough attention to flip his personal Instagram account to private.

Atticus claims that his true fans do not want to know his real identity, and we won’t spoil it here either. Much like the pop star Sia, who took a backseat on fame by allowing a bob wig to stand in as her avatar, anyone who really cares to know can find out.

It’s also beyond the point, as explained by Atticus. “I’m not so precious about who I am,” he said. “It’s a symbol and a reminder to write vulnerably. I never thought I was allowed to explore that more vulnerable side before. There is one person in my life who opened my eyes to that, a friend, an actor, a gentleman named Michael Madsen.”

The Quentin Tarantino muse, whom Atticus described as a “friend of a friend,” has released several volumes of poetry himself. “Here was the archetypal American badass riding motorcycles and all that, and he was writing poetry!” Atticus said. “That was incredible, I found. It gave me my first permission to explore that.”

Those explorations have now produced two bestselling books of poetry – Love Her Wild and The Dark Between Stars – in addition to 2,700 Instagram posts, predominantly poems that have been championed by celebrities including supermodel Karlie Kloss and actor Emma Roberts. Atticus’s work tends to take the form of a dozen or two words of simply stated sentiment, written on his laptop or in the Evernote app on his phone. Recurring themes include love and heartbreak, wine, whiskey, Europe, rain, and self-empowerment maxims, such as, “You weren’t given wings/to see the world from a tree.”

The poems are presented in a variety of stylized fonts. In the books, they often appear alongside photography, mostly of nature, women, and women in nature.

His simple prose may be perfect for the Insta-poet bubble, best represented by blockbuster Torontonian Rupi Kaur, though it also chases the pared-down aphorisms of his literary heroes such as Robert Frost and Emily Dickinson. This summer, he will return to the University of Oxford, where he has previously taken summer poetry courses.

“One thing that studying poetry taught me was how little I know about writing poetry,” he said. “It opened me up to ideas about how elementary I am. When I first started the reason I enjoyed it so much, and maybe part of the reason it took off, was because I didn’t have any rules. I am now trying to learn the rules so that I can consciously break them if I want to.” 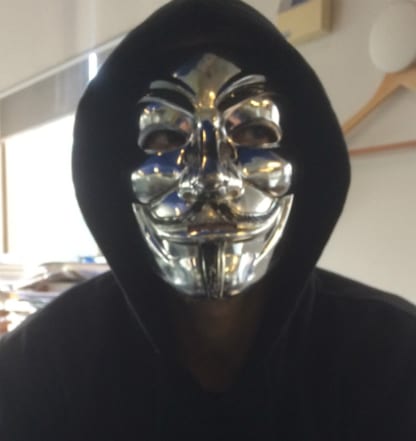 Later that evening, Atticus appeared at a Toronto Indigo to read for a crowd of hundreds. Following a warm-up soundtrack that includes teen pop heartthrobs Johnny Orlando and Shawn Mendes, Atticus appeared to applause and camera phone salutes. He read some poems, but spent most of the time answering audience questions.

One girl asked him if he likes being a writer. “I think it’s a double-edged sword,” he said, his black hoodie pulled up to cover the corners of his mask, which shimmers under the florescent light. “Because to be a writer, you have to feel a lot. And you can go like this…” – at which point he waves his hand up and down in the air.

Earlier that day, Atticus admitted that owning and expressing those feelings remains a challenge for him, even while writing from behind a mask. “I’m still having to challenge myself to be vulnerable,” he said. “It’s a difficult thing.”