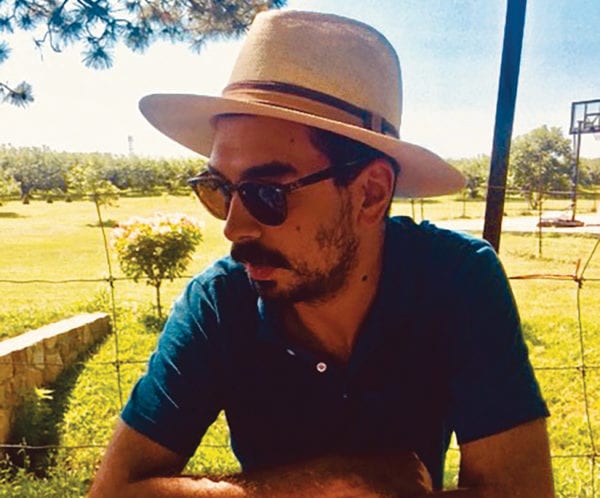 In “Blood Work,” which opens Bardia Sinaee’s debut poetry collection, the speaker says: “It is the squelching armpit of August / When simply living is enough for people […] Love is for the lucky and the brave / You will experience good health.” Written during a “chemo fog” while Sinaee was receiving treatment for cancer in 2015, “Blood Work” characterizes the intimate and conversational tone of Intruder, a collection that has been 10 years in the making for the 30-year-old poet.

Over the phone from his apartment in Toronto’s Junction Triangle neighbourhood, Sinaee shares the disjunctive experience of writing through chemo fog: “It’s almost like when you’re hungover. Maybe that’s a bad analogy, but when you’re hungover, or if you haven’t slept for an entire night, you can’t think of words when you need them. … The first poem I wrote after leaving the hospital is ‘Blood Work.’ It’s kind of got a dispatch quality to it … and that’s because that’s how I was able to write. I would write, like, one sentence, and then I would just sleep. And then I would come back to it later and write another sentence or two.”

Intruder was initially a placeholder title for the collection, which Sinaee wanted to call Ample Habitat after a convenience store in his neighbourhood. “I really liked [Ample Habitat] because it’s so empty, you can almost put anything into it.” Intruder started to reassert itself as a title when Sinaee noticed a pattern emerging in his work. “At some point, I realized that the image of things kind of … encroaching … was constant,” he says.

While writing the book, he lived a few houses down from his current apartment, which he shares with his partner, and there was constant construction. “When we left the windows open, the house would get filled with dust from all the construction and it just felt like the world was closing in. Intruder seemed to capture that.”

Sinaee’s collection was acquired by House of Anansi Press in 2018; he worked on the manuscript with editor Kevin Connolly, who was Sinaee’s thesis adviser at the University of Guelph’s MFA in Creative Writing program.

“To be honest, the main reason I did the MFA was I really needed health insurance. I was working at Chapters when I got sick,” he says. “I was immuno-compromised. It was very difficult to be on my feet for eight to 10 hours a day.” During the MFA, which he started in 2017, Sinaee found work teaching, made new friends, and began writing more “as soon as I started going to those six-hour seminars and reading all the stuff they make you read.”

The Iranian-born, Mississauga-raised poet admits he was initially resistant to mentioning cancer or chemo in the book’s jacket copy and promotional materials. This was notwithstanding pieces like “Twelve Storeys,” a prose poem adapted from an essay written for a creative nonfiction class, in which Sinaee confronts cancer head-on: “The first procedure after I’m admitted to the ward is the / insertion of a central venous catheter in my chest. […] This is one place chemo goes.”

His reservations about centring his illness stem from concerns about being pigeonholed: “I mean, this is not going to happen now because of COVID, but I was worried that I would just end up on festival panels about illness,” he says. “I don’t really know that much about it. It didn’t really make me smarter or wiser. It changed me. … I don’t think you ever don’t have cancer. They just say you’re in remission.”

The last section of Intruder was written during the ongoing pandemic, when Sinaee had trouble reading. “I couldn’t concentrate because it felt like the sky was falling, but I was able to write a lot.” Perhaps unsurprisingly, the poems written during this period are equally about the pandemic and one of the aspects of our lives it has brought most to the forefront: the internet.

“We all kind of had no choice but to retreat into the online world,” says Sinaee, who has closely followed the “morbidly fascinating” QAnon far-right conspiracy theories proliferating online. “The internet this past spring and summer was a bizarre, warped place.”

It is perhaps understandable that Intruder imports some of this queasiness into its content. As for the poet himself, Sinaee admits that the pandemic has made renunciation and asceticism appealing. “I’ve recently stopped looking at my phone. I bought a pocket dictionary. I bought a bedside clock. I found all these ways to offload all these things I had outsourced to my phone, just so I don’t look at it as much. It’s been quite nice.”