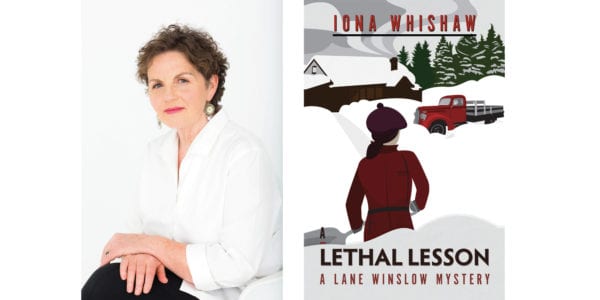 When Iona Whishaw’s first book, a picture book called Henry and the Cow Problem, was published by Annick Press in 1995, a review ran in Q&Q: “We are sure to be hearing more from Whishaw soon.” “And then no one heard from me for 20 years,” the author, 72, says by phone from her home in Vancouver.

Readers are certainly listening now: Whishaw’s Lane Winslow series of historical mysteries set in B.C.’s Kootenay region have become reliable bestsellers on the Canadian fiction chart. The eighth, A Lethal Lesson, was published Apr. 27 and centres on a missing teacher.

Q&Q spoke to Whishaw about her second act as a bestselling writer and why a postwar character such as Lane Winslow is the perfect antidote to our anxious present.

Are you getting used to every Lane Winslow book becoming a bestseller?

It is a surprise every time. As a big reader of series, sooner or later [the author] writes a bumpy book. This obviously wasn’t the bumpy book.

You have been very prolific. What has that pace been like as a writer?

At the beginning I was putting out two books a year, one in the fall and one in the spring. [TouchWood Editions] said, “Why don’t we go one a year?” I felt some relief at that. I was writing 2,000 words a day or more.

Readers have embraced Lane Winslow. What do you think they’re drawn to?

We’ve been going through some hard years. Politically, environmentally, and all the rest of it. I think it is quite a relief to read books in which you’re secure and comfortable that the [characters] are kind, ethical people. It’s an old-fashioned decency. People like to take refuge in history, forgetting that history was probably much more obnoxious than our times are.

Can we be assured of a happy ending in your books?

Well, someone’s got to die! But generally speaking yes. Someone once remarked, “If you ever write mysteries, they’ll be kind.” And I think that proves to be true.

What do you think they meant by that?

I’m not a big fan of blood and guts. They knew that I wouldn’t write graphic books. I was a teacher for some time and I worked in social services with kids for a long time and am generally considered kind.

Who has been a champion of this series?

[Writer] Kerry Clare has been huge. She has just been unremittingly positive and excited about everything that I’ve written. There is a mystery bookstore in Houston called Murder by the Book that had [the first book in the series] A Killer In King’s Cove (2016) as their top-selling paperback in 2018. That was a case of a bookseller falling in love with the books and handing them out to everyone who came in.

Do you have any thoughts on the timing of your publishing success?

It couldn’t have come before now. Much of my life experience is woven into my books. I am at the stage in my life where I can go back and access that stuff, because I’m not quite in the middle of it anymore.

This story has been updated from the July/August print issue to reflect current chart stats.