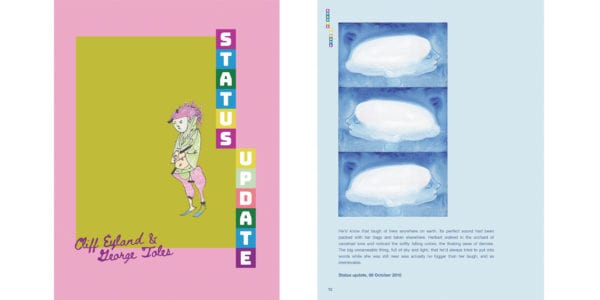 When George Toles, 72, joined Facebook in 2008, it was only to keep an eye on his kids. He found the medium dull but had an idea how to make it more interesting. That’s when he began work on what would become Status Update (At Bay Press).

“It occurred to me that it might be possible in this bargain basement, come-one-come-all medium to do something unusual, fanciful, creative,” says Toles, a Winnipeg-based film and literature professor and screenwriter, whose credits include The Saddest Music in the World and Edison and Leo. He made a daily commitment to create a micro-narrative of one or two sentences in his Facebook status updates, a practice he still maintains.

Initially constrained by Facebook’s character limit, Toles tried to be funny “without being joke-oriented.” Toles didn’t announce what he was undertaking when he began writing micro-fiction on Facebook, and initially his Facebook friends were confused. But over time, his status updates developed a following; occasionally, artists would ask to respond visually. 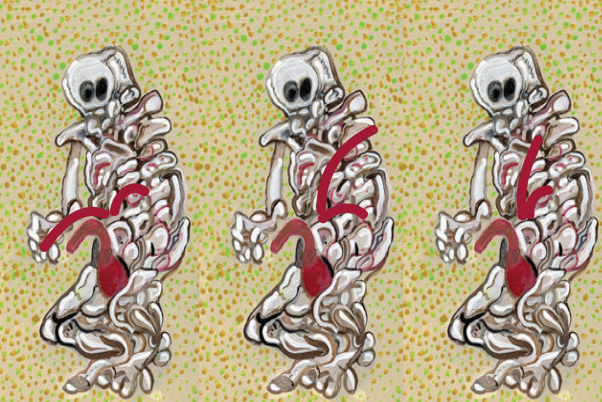 In 2011, the work found a regular illustrator in Winnipeg painter Cliff Eyland, a close friend. Working digitally, Eyland began with three or four visual replies before asking Toles if he could reply to them all. The often figurative mixed-media work was sometimes monochromatic, sometimes brightly coloured, and always surprising.

“He never said a blessed word about what he was doing,” Toles says of Eyland. “It was a hilariously incommunicado exchange of ideas, language to image and back again.”

The disconnected nature of the prose, where one day’s micro-narrative gave no indication of what would follow, matched well with Eyland’s work. “Cliff’s images, whatever you make of them, are not instantly things that come into emotional or narrative focus,” Toles says. “I think the texts and Cliff’s images in tandem, in a kind of shimmering way, heighten the mystery. There’s a collision between image and text that takes the reader to complete.”

The pair collaborated until the end of 2013, by which time there were about 1,500 illustrated status updates. They met with At Bay Press in 2019 to discuss publication, but neither had the “editorial will” to make the necessary decisions to shape the vast body of work into a book, Toles says. That’s when Toles’s son Thomas joined the project.

Over a few weeks, Thomas read the whole collection, winnowing the list down to 99. Last came the challenging task of determining the order, without defaulting to a formal pattern or structure. “I hope that some coherence emerged out of the chaos,” he says. “But not too much.”

The selection and order were finalized before Eyland died last May at 65 after a prolonged illness. The book’s last entry is a status update from 2015, after the collaboration with Eyland had ended. Since it lacks corresponding artwork, it is reproduced in the book as it originally appeared on Facebook: six sentences under Toles’s name and profile photo. It is an update that, as Toles notes, “speaks so evocatively about the end of things.”

“It feels very strange and coincidental and sad that it ends on this little piece of George without Cliff,” Thomas says.