When Russia launched a full-scale invasion of Ukraine earlier this year, publishers in the Ukrainian book industry had to change the way they worked. Some publishers, such as Komora, started selling ebooks for the first time. Art publisher Rodovid Press made a free PDF version of the book Nash Herb (Our Coat of Arms), a study of the history and visual presentation of the Ukrainian coat of arms, available on their website.

The team at Ukraїner continued their travel video production, with a new focus on de-occupied regions. Poet Serhiy Zhadan, a resident of Kharkiv, has been using the funds raised by his performances to purchase vehicles for the Armed Forces of Ukraine. He has also performed poetry readings with Marjana Savka, the founder of The Old Lion Publishing House in Lviv, to raise funds. Book Arsenal, an annual literary festival held in May in Kyiv, was cancelled for 2022.

Q&Q recently spoke with four Ukrainian publishers via email about how they’ve had to adapt to continue their work during the full-scale war.

Kostiantyn Kozhemiaka founded ArtHuss in 2016 to publish books on art and design for the Ukrainian market. The publisher, initially under the same umbrella as the printing business of the same name (Huss), is now a separate entity, with Huss still printing books for ArtHuss. In 2020, ArtHuss published Alisa Lozhkina’s Permanent Revolution: Art in Ukraine, the 20th to the Early 21st Century, an extensive review of the development of visual art practices in Ukraine. ArtHuss has an office in Kyiv, and staff work from home or from bomb shelters during air-raid alerts. The speed of workflow and book distribution have slowed down. Post office visits put team members at risk, and so are scheduled less frequently. 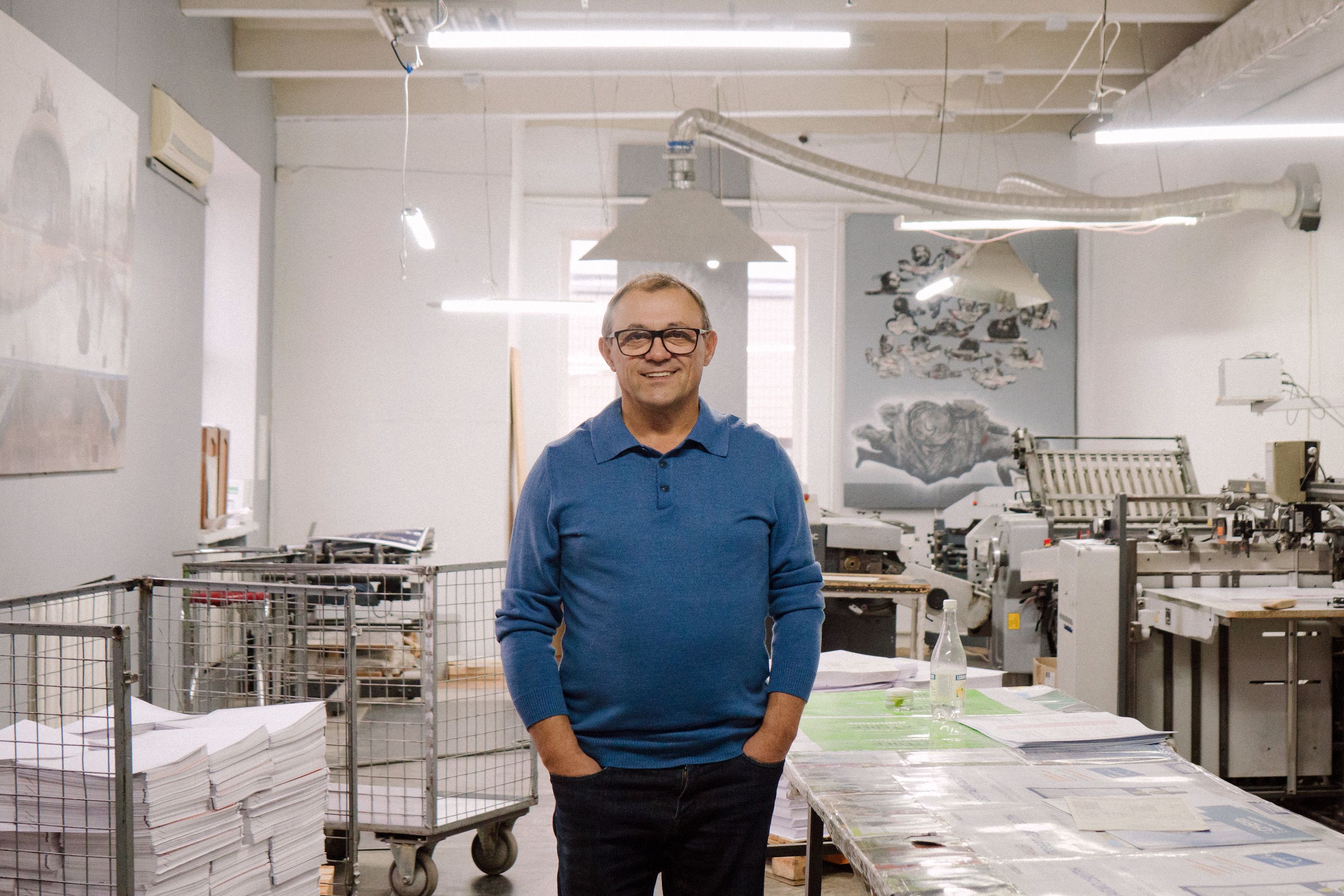 At the moment, we are publishing titles for the creative industries, including Ukrainian translations of The Art of Color by Johannes Itten and 1000 Years of Joys and Sorrows by Ai Weiwei. We are slowly returning to pre-war operations, but the first few weeks of the war were a shock. We stopped work for a month because we needed to rethink our next steps. Our books are also part of our fight; they support our readers in their professional development and in understanding the power of Ukrainian art.

Before and during COVID-19, we set up successful remote-work processes for every team member. We have certain issues with paper delivery for our printing press, but we continue to work with our trusted partners to maintain a high level of book quality. Our process has slowed down to an extent during the war, but is still stable and reliable. Some of our team members were conscripted to serve in the Ukrainian Armed Forces and others serve as volunteers. We support their decisions, think about them, and believe in our victory.

Komora Publishing House was founded in 2013 in partnership with Komora, a Ukrainian-British distributor of musical equipment for the Ukrainian market. Komora’s office and warehouse in Kyiv so far have not been damaged, but access to the warehouse was blocked for some time, leaving the publisher unable to ship books and unsure when they would be able to resume distribution.

We are a small publisher, and we publish 10 to 12 books a year. Our plan this year was to publish eight books for the Book Arsenal festival. Each book was meant to have an event of its own [at the book fair], but we were forced to stop all work and put most of our projects on hold. During March and April, we maintained basic work processes to keep the publishing house alive. However, we had no access to our warehouse, so could not ship stock to bookstores, and we also paused our internet store. The team and project experts were dispersed to various cities and countries. In May, some of our team members who were based in Kyiv could partially resume book sales and shipping; they re-established contacts with the partner bookstore chains. Komora had not published ebooks at all, but because many Ukrainians are now abroad and cannot easily access Ukrainian books, we recently launched the sale of ebooks via the online bookstore Yakaboo. We also started reviving our book projects one by one, even if they are now published later than planned.

In July, we received from the printer copies of the first book published since the beginning of the Russian invasion: Carmen Laforet’s Nada, translated into Ukrainian by Anna Vovchenko. This is our first work translated from Spanish and the first publication of Carmen Laforet in Ukraine. In August, we published The Eighth Life (for Brilka) by Nino Haratischvili, translated from German by Roksoliana Sviato. This is a monumental novel (1,000+ pages) that took two years to publish. Despite the rising cost of paper and printing for a book of this size, we decided to proceed because we believe this book must exist – it is another illustration of Russia’s long-standing aggressive expansionist ambitions, in this case toward Georgia.

We are planning to release Money from Hitler by Radka Denemarková (translated from Czech by Iryna Zabiiyaka) and Oksana Zabuzhko’s newest essay The Longest Journey on the preconditions for the current war in the context of the past 30 to 300 years. The rights to this book have been already acquired by several publishers abroad.

In August, we were able to start shipping books once or twice a week, and we are thankful to our printer, Globus in Kharkiv, for continuing to work despite the near-daily shelling of that city.

The team of Ukraїner left their offices in Kyiv on February 24 and moved hard drives containing years’ worth of footage to a safe place.

Ukraїner started as a small volunteer community of enthusiastic individuals to explore and document Ukraine to show it to both fellow Ukrainians and the wider world. Since 2016, the team has been conducting expeditions all over the country. We’ve collected people’s stories and shot terabytes of photo and video material.

Today, we have more than 600 volunteers who work in teams. On February 24, the first day of the full-scale war against Ukraine, we started broadcasting about the war and the way Ukraine is overcoming the disasters caused by the occupying forces. Stories about our resilience – told in different languages, on various platforms – became one of the most vital priorities. We collect the stories of evacuees, document humanitarian and military initiatives, record interviews with activists, and debunk Russian propaganda.

We have published four books, one of them in English: Who We Are: Indigenous Peoples and National Minorities of Ukraine (2021); Ukraine from Above (2022), photographs of Ukraine from a drone taken over the years of our expeditions; Ukraїner: Ukrainian Insider (published in English in 2019, with QR codes to access our video materials); and Ukraїner. Ukrainian Insider ІІ (2022).

Since the beginning of Russia’s invasion, Ukraїner has been documenting the regional resistance of Ukrainians and the consequences of the Russian occupation in the special project “Deoccupation.”

Creative Women Publishing was founded by a group of women in 2018 to encourage women’s participation in creative spaces. In March, the core team was dispersed and now only two of the co-founders still live in Ukraine. 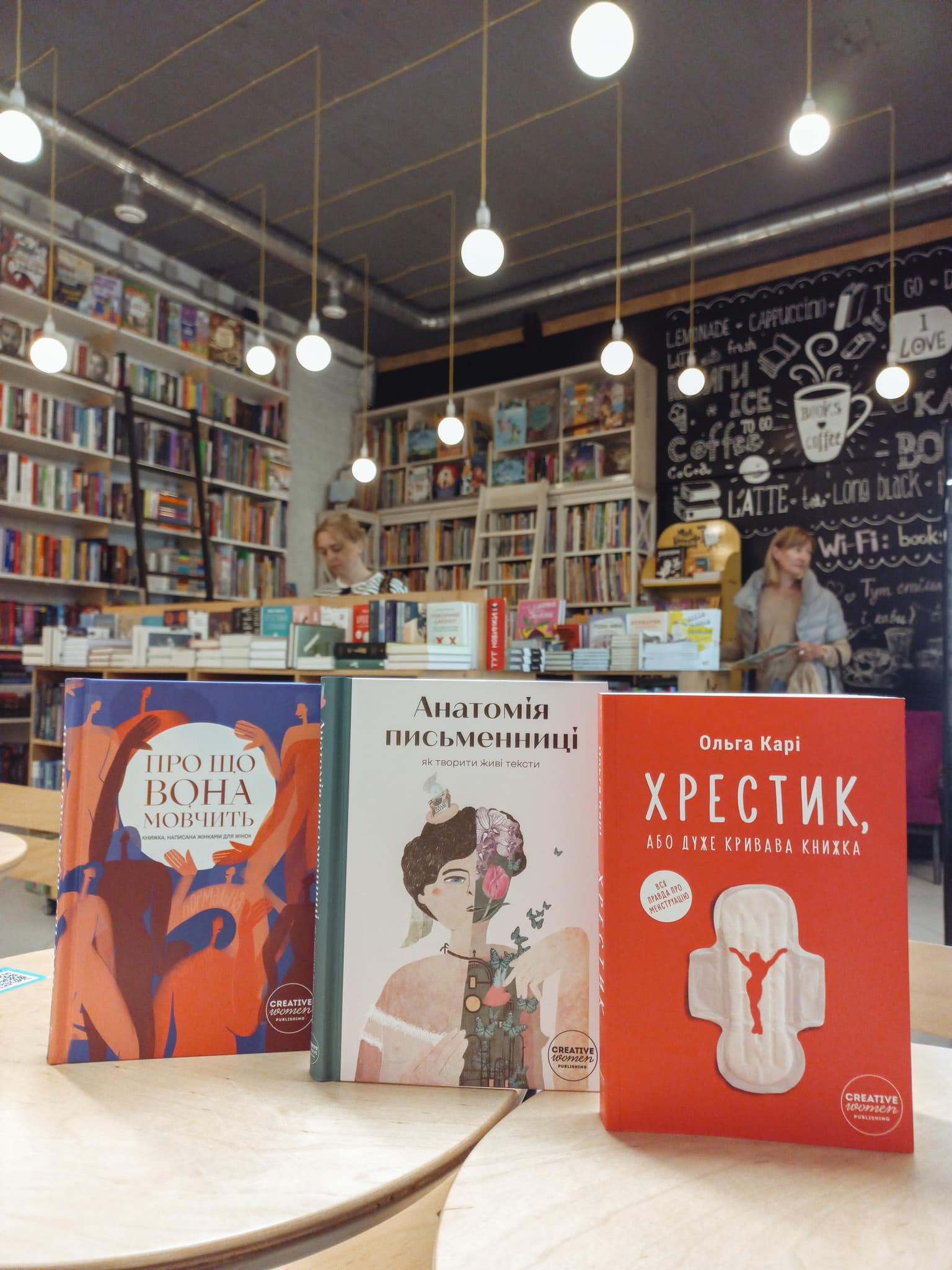 One of our mandates is working with debut women authors. We are currently preparing two books for publication: In the Glass Forest, a collection of 13 feminist fantasy short stories, and What He Is Silent About, an anthology of 50 stories by men about fragility, vulnerability, pain, joy, and the right to be heard. These are personal stories that counter the myth of the “real man,” and avoid the pathos of a success story; we have now updated it with the stories of men who have been to war. What He Is Silent About is a companion to our earlier title What She Is Silent About, which addressed women’s experiences that are often seen as taboo in Ukrainian society. These two books were born out of the wish for a dialogue between men and women in our society.

During the war, our mission is to publish books that promote the visibility of women in Ukrainian society. We have published books on menstruation, women activists, motherhood, experiences of illness or loss, personal boundary setting, as well as career guides, writing guides for debut women authors, and more.

It is difficult to work in force majeure conditions, when it is only possible to plan one month ahead, at best. The team is dispersed at the moment, and we work remotely from England, Belgium, Poland, and Germany. Paper prices and supplier rates have been rising. At the same time, we are seeing various growth opportunities for the translation of our books and for rights acquisition.

These interviews have been edited and condensed.