A stunning debut novel, Satellite Love is the beautiful and ethereal tale of a young woman’s loneliness and her connections to the people around her. There’s a dreamlike quality to this book that makes you want to take your time and savour it; the author’s use of language is poetic and captivating. Ferguson’s treatment of mental illness, dementia, bullying, and other issues is sensitive and empathetic.
–Mary-Ann Yazedjian, Book Warehouse, Vancouver

The Pleasure of the Text
Sami Alwani
Conundrum Press

The Pleasure of the Text is a remarkable debut that showcases Alwani’s short comics, which are at once pointed and playful, mundane and metaphysical. This is smart, fun, important work from a fresh voice in Canadian comics.
–Andrew Woodrow-Butcher, a reviewer in Toronto

Nisha Patel’s debut poetry collection, Coconut, is a much-needed and powerful exploration of racism, sexuality, and mental health. This Canadian National Slam Champion and former Edmonton poet laureate leaves no part of her identity unscrutinized as she challenges what it means to be a second-generation immigrant, daughter, consumer, and lover. After finishing this passionate and insightful debut, readers will be eager for more from this young, rising talent.
–Matthew Stepanic, Glass Bookshop, Edmonton

Singh’s book traces the ripple effects of intergenerational trauma, beginning with Partition and the Sikh massacre (the violence of which Singh experienced and whose echoes are still felt in racist incidents in Canada), to craft an elegiac memoir about the bond between a mother and her son.

The author of two novels, a book of poetry, and a collection of short stories, Singh transports the reader with fiction of remarkable specificity and timeliness. He is an unparalleled chronicler of the land by the “pherozi-coloured” Bow River and of places far away, but his writing is always close to the heart.
–Shazia Hafiz Ramji, a poet and reviewer from Calgary and Vancouver

Not only is Book of Wings a stunning example of what is possible when a poet writes a novel, it is a testament to what is possible when we move through the world with an open, broken heart. Maya, the protagonist of this tale, learns to love at a distance and learns how to love who she becomes in the process. On her journey, strangers become guides, memories become markers, and every step she takes inevitably leads her to the doorstep of dervishhood.
–Sheniz Janmohamed, a reviewer in Markham

Between Toronto poet Molly Peacock’s luscious biography of Toronto painter Mary Hiester Reid and Helen Humphreys’s illustrated Field Study, ECW Press has emerged as the publisher of some of this year’s most beautifully packaged titles. Peacock’s hybrid telling of Reid’s story is intertwined with her own personal recollections of love and sorrow, and it serves as a treatise for women who want to lead creative lives.
–Sue Carter, an editor and reviewer in Toronto

Based on the tragic true story of the 1941 Mount Allison University residence fire, The Sound of Fire is the riveting and intricate tale of a small community set against the larger context of the Second World War. Speaking personally, as a Mount Allison alumna living in this university town, I’m delighted that we can feature this breathtaking and intimate work of historical fiction.
–Ellen Pickle, Tidewater Books & Browsery, Sackville

Richard Wagamese and his writings are sorely missed by us at the shop. Few people have written with the sheer, simple beauty found in his prose. So we were happy to receive this collection edited by Drew Hayden Taylor, which allows us to once again read the soft, guiding words of Wagamese’s wisdom.
–Rupert McNally, Ben McNally Books, Toronto 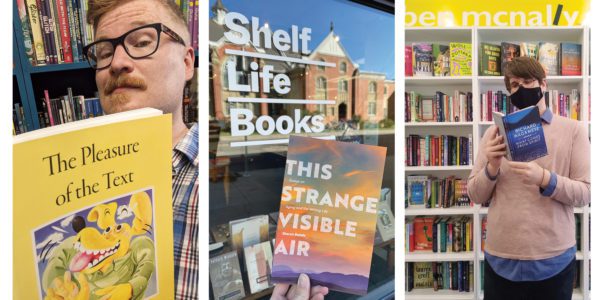 Hana Khan Carries On is a heartwarming and laugh-out-loud-hilarious rom-com that makes it easy to fall in love – not just with the main characters but with the entire world Uzma Jalaluddin has created. Billed as You’ve Got Mail with two competing halal restaurants in a fictional Scarborough neighbourhood, the novel explores topics like racism and family conflicts with a light, deft touch, yet its nuanced complexities, at least to this BIPOC reader, hit painfully close to home.
–Jaclyn Qua-Hiansen, a reviewer in Toronto

This Strange Visible Air is a delightful collection of essays. Butala’s trademark irreverence is on full display in the opening chapter, “Against Ageism,” where she remarks, “In the past, when we all died much younger, old people were fairly rare, caused little trouble, and in Western society, were easily ignored.” (Not anymore, with six million seniors in Canada’s population!)

Butala’s wit and toughness are richly evident in essays with titles like “Lettuce or Things I Can’t Do Now That I’m Old” and “Sharon Deals with the Problem of Evil.” My own favourite is “Cold Ankles,” in which she finds, with some difficulty, a way to burn her journals. Here at Shelf Life Books, we think This Strange Visible Air makes a perfect companion to Butala’s award-winning short-story collection on the same subject, Season of Fury and Wonder.
–JoAnn McCaig, Shelf Life Books, Calgary

Even So
Lauren B. Davis
Dundurn Press

Lauren B. Davis never misses. Even So is a book filled with beautiful sentences; it dives deep into the mess that is the human condition. But for all its artistry, the novel moves like a cheetah. This is as good as the modern novel gets.
–David Worsley, Words Worth Books, Waterloo

Set on the West Coast, Astra comprises 10 different perspectives on the life of its titular character – a most interesting woman, and one we come to love through the eyes of those around her. The highly accomplished book is a joy to sell to everyone.
–Samantha Bolen, Bolen Books, Victoria 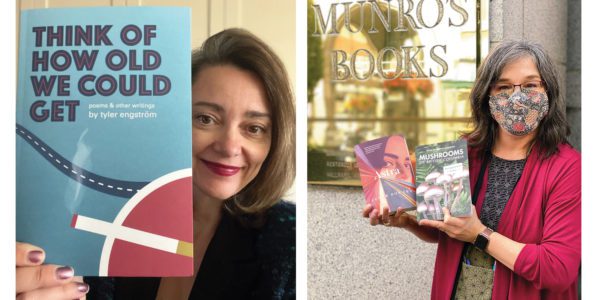 Think of How Old We Could Get
Tyler Engström
Frontenac House

Tyler Engström is a wild new voice in Canadian poetry. Like past masters
Picasso and Dali, he translates love, living, and acute observance through the lens of surrealism and existentialism in Think of How Old We Could Get. Engström’s poems echo revelation in the ways of poets Gary Barwin or James Tate. Common objects become portals of insight via ethereal and startling images while evoking philosophical contemplations. It’s no surprise that Engström was shortlisted for the RBC Bronwen Wallace Award for Emerging Writers in 2017.
–Micheline Maylor, a reviewer in Alberta

A star is born with Conor Kerr, whose debut novel hit shelves this fall. Set in Edmonton, the book follows Daniel, a young Métis man, as he navigates the trials of everyday life that play out against the backdrop of systemic racism, intergenerational trauma, and intracommunity violence. Drawing on Papaschase and Métis oral histories as well as his own lived experience, Kerr makes a dazzling first impression with this novel about contemporary Métis life on Treaty Six.
–Jason Purcell, Glass Bookshop, Edmonton

“Tell me, can anyone say where one / self fails and another begins?” asks Ottawa poet David O’Meara in his fifth collection, a suite of precisely calibrated lyrics about middle age, death, and the vagaries of our modern world – all of which add up to a “pantomime of normal.” O’Meara deftly weaves language into a tapestry of shifting registers and crystalline images while paying tribute to the dead – poet Elise Partridge, O’Meara’s own father – while casting a wary eye on our nervous future. He’s also almost painfully funny.
–Steven W. Beattie, critic and reviewer in Stratford 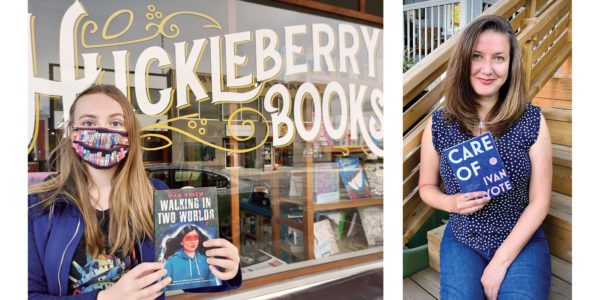 This warm-hearted, empathetic collection of letters was a much-needed balm during a very difficult year. Coyote writes with uncommon vulnerability, generosity, and wisdom, creating an insightful rarity of a book that brims with hope.
–Stacey May Fowles, author and reviewer in Toronto

This brand new handbook from the Royal BC Museum, with detailed profiles of more than 350 fungi, will be the authoritative reference for years to come. It’s already flying out the door, as amateur mycologists are eager to head off into the woods in search of treasures.
–Jessica Walker, Munro’s Books, Victoria

Tags: Books of the Year