To encourage people to shop at their local indies, CIBA is running a contest of their own. With proof of a purchase made at any independent Canadian bookstore on April 24 or 25, either in person, online, or by phone, book buyers can enter the contest to win one of 18 virtual author experience prizes donated by publishers.

Despite the continuing impact the COVID-19 pandemic is having on retail shopping, booksellers across the country have found some creative ways to mark the day without drawing a crowd and while still encouraging people to read – and shop local. The booksellers behind four such examples spoke to Q&Q about the importance of celebrating and supporting indies this year and every year.

A complete list of bookstores participating in this year’s event, and the activities they are hosting to mark the occasion, can be found on CIBA’s website.

A window of their own 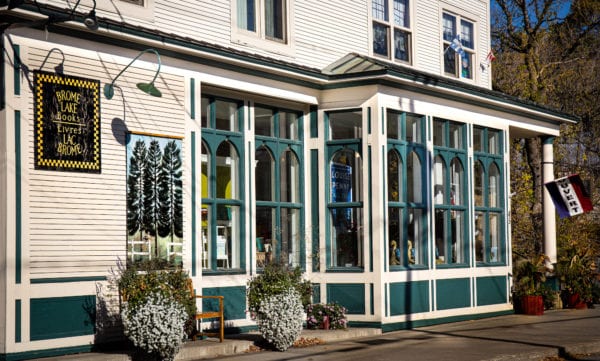 Brome Lake Books in Knowlton, Quebec, has scheduled six local authors to sit and write in the store’s window for one-hour intervals over the course of the day. Some time ago, local poet Sheryl Taylor brought a chair to the bookstore and decreed it the store’s writing chair, says co-owner Danny McAuley. Drawing on inspiration from Toronto bookstore Mabel’s Fables, which held an event in 2015 where author and illustrator Barbara Reid snuck into the shop’s window in her pyjamas to launch her book Sing a Song of Bedtime, Brome Lake Books reached out to see whether any of their local authors would want to participate in a window writing project to mark Independent Bookstore Day this year. Taylor, Maurice Crossfield, Meghan Redmile, Peter White, Roger de la Mare, and Peter Turner all agreed.

“We’ve never had people in the window,” McAuley says. “They’re all really keen.”

The authors will sit in the writing chair, which will be placed in the store’s raised Victorian windows and accompanied by a small desk. From there, they will be able to look out over the village green and a mill pond with a dam. Their books will be displayed on a shelf behind them, and a sign saying, “Quiet, author at work!” will explain the scene to passersby. McAuley says the store’s staff will be sharing photos and videos of the authors via the bookstore’s social media accounts.

“We don’t want to draw a crowd because of COVID,” McAuley says. “But I think we can still pull it off.”

Gotta get ’em all 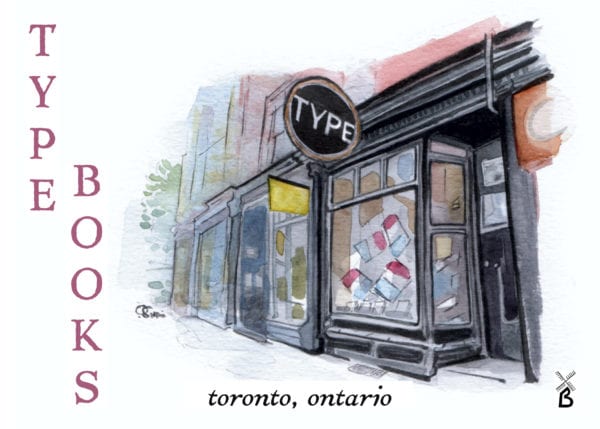 To mark Independent Bookstore Day and pay homage to the indie bookstores which have been Biblioasis’s biggest supporters over the last year, the Windsor, Ontario-based publisher, which also runs a bookstore in the city, created a series of 10 indie bookstore trading cards. Each card features a watercolour painting of the bookstore by artist Owen Swain, as well as an endorsement from a local author who frequents the shop.

The cards are being sold at more than 40 bookstores across North America, including Canadian booksellers Type Books and Another Story in Toronto; Iron Dog Books in Vancouver; Glass Bookshop in Edmonton; Munro’s Books in Victoria; The Book Keeper in Sarnia, Ontario; Words Worth Books in Waterloo, Ontario; Someday Books in St. Catharines, Ontario; and Shelf Life Books in Calgary. Wells says Biblioasis plans to release an additional 10 bookstore trading cards later this year.

Biblioasis has also launched a pamphlet series written by booksellers to mark Independent Bookstore Day. The first in the series, The Least We Can Do, by Josh Cook of Porter Square Books in Cambridge, Massachusetts, is also available at indie bookstores carrying the trading cards. The series will feature different booksellers “grappling with the issues involved in literary culture and bookselling at the current time,” Wells says. Biblioasis plans to publish three or four pamphlets a year.

Vancouver bookseller Hilary Atleo of Iron Dog Books admits that the goal of the Independent Bookstore Day celebration she spearheaded is a little unconventional. Atleo and eight other booksellers in the city have teamed up to cross-promote each other, with each store offering customers the chance to win a prize pack that includes gift cards to the other stores.

“Everyone wants to promote Vancouver as this book mecca, one of the best bookstore towns in Canada,” Atleo says. “I really do believe that it is all of us independents working together that is going to make a good industry and a strong biosphere.”

The contest details vary by store. At Iron Dog Books, any pick-up order placed online Saturday will be entered into the draw for their prize, which includes more than $350 worth of gift cards, puzzles, and book swag. Atleo and her bookseller collaborators limited the involved shops to those in the municipality of Vancouver this year, in part because of guidance that people should refrain from travelling beyond the boundaries of their public-health region, but Atleo hopes that in the future this collaborative celebration of the city’s indie spirit can expand to include the entire greater Metro Vancouver area. 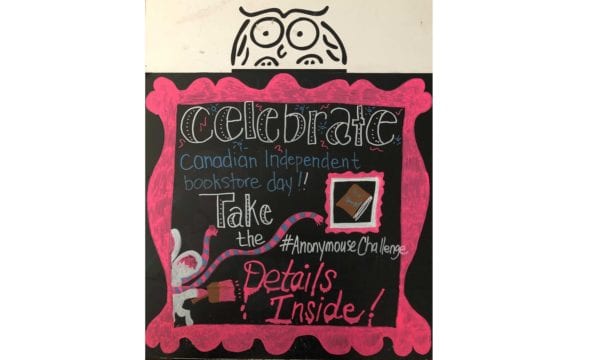 Calgary’s Owl Nest Books is one of a number of bookstores across the country hosting a scavenger hunt as part of the Anonymouse Challenge.

The hunt, based on Vikki VanSickle’s recently released picture book Anonymouse, illustrated by Anna Pirolli, encourages Calgarians to get out into their community and take a picture of any art they find or create in their neighbourhood, in homage to the titular rodent who creates street art to cheer his fellow city creatures. Tagging the bookstore and using the #AnonymouseChallenge hashtag, photos can then be uploaded to Facebook or Instagram to be entered into a draw for a prize provided by Tundra Books and Penguin.

“I think it helps remind people that the independent stores are the crucial ones,” Owl’s Nest’s operations manager Kristi Weisgerber says. “They keep local people employed, they pay local taxes.”

Owl’s Nest also has plans to host their annual book club discussion night, where staff take turns recommending their favourite books from the past year, on Zoom on April 27.