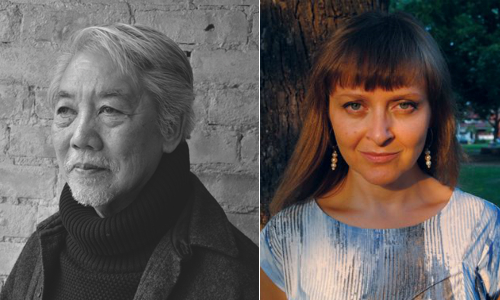 Two beloved Canadian literary figures passed away during the last weekend of April.

Wayson Choy, author of four books including 1995’s The Jade Peony (Douglas & McIntyre), passed away on April 28 at age 80*, his agent Denise Bukowski confirmed on The Bukowski Agency’s website. Teva Harrison, an author and illustrator whose 2016 graphic novel In-Between Days documented her experience living with metastatic breast cancer, passed away in her sleep on April 27 at the age of 42.

Choy’s debut novel, 1995’s The Jade Peony, introduced a unique voice to Canadian literature. Set in Vancouver’s Chinatown in the ’30s and ’40s, Choy’s queer Asian-Canadian perspective set his work apart in the Canadian literary canon. He subsequently published a memoir, Paper Shadows: A Chinatown Childhood (1999); a sequel to Peony called All That Matters (2004); and a second memoir, Not Yet: A Memoir of Living and Almost Dying (2009), about surviving a near-death experience.

My hand trembled signing my novel for #WaysonChoy. Can’t tell you how overwhelmed I was when he welcomed me to the #CanLit family. 🍁 pic.twitter.com/CzpokaIkDq

In-Between Days, Harrison’s honest and often uplifting graphic memoir about grappling with a terminal cancer diagnosis at the age of 37, brought her a following of people who had been touched by her work. It was a finalist for the 2016 Governor General’s Award for English-language non-fiction.

House of Anansi Press, who published Days, will be releasing a book of poetry and illustration entitled Not One of These Poems Is About You by Harrison in the immediate future. In a statement reflecting on her passing, House of Anansi publisher Sarah MacLachlan wrote, “Anyone who came into contact with Teva Harrison will be aware of how hard it was to resist her.

“Her innate goodness, her strong hugs, and her open heart were her hallmarks. She was in my view a force of nature — simply undeniable.”

My inimitable wife, @robotpilot, died peacefully in her sleep last night. Her great joy was the kindness that people show, and the magic evident in the every day bits of living. She was a pure beating heart. Carry magic with you. Hold people close. The world needs it. pic.twitter.com/Yk0Mw1nOrK