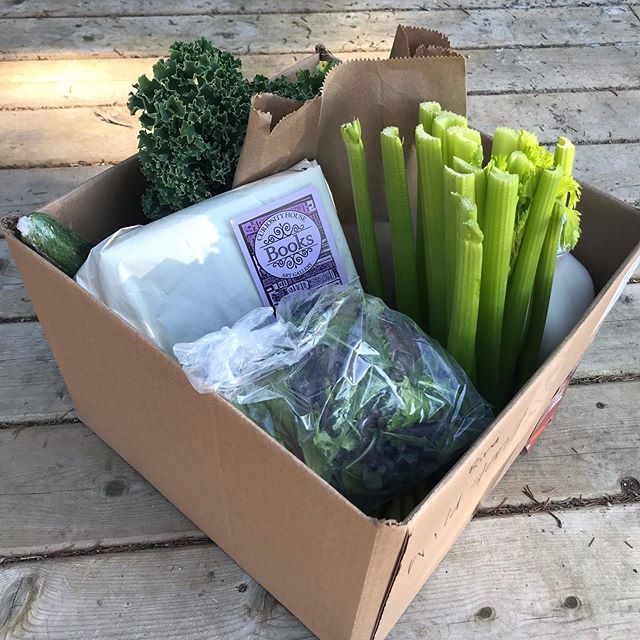 Curiosity House Books was one of the first local businesses in the town of Creemore, Ontario, to shut down when the COVID-19 lockdown appeared imminent. At first, co-owner Rina Barone wasn’t sure if the shop would open again, or when, or what kind of services she could offer customers.

But like so many other indie booksellers, Curiosity House quickly adapted to new routines, offering curbside pickup and deliveries. The store’s latest initiative, The Books and the Bounty, will not just put books in customers’ hands, but food on their tables. Curiosity House has partnered with Wild Stand General Store in nearby Collingwood to expand its delivery area and customer base by offering book orders with weekly organic food boxes.

Barone was contacted by Wild Stand owner Darrelle Leeming. Barone and her husband, Chris Dunk, used to run the bookstore pop-up shop, Simcoe Street Publishing, in Creemore. Leeming – who operated the food trucks at their other venture, the fall Dunedin Literary Festival – is a big book lover, and offered her support to the store.

Through their partnership, customers can order produce through Wild Stand and books through Curiosity House, and Barone and Leeming coordinate bundling their purchases together for delivery across the two towns.

“She’s had new customers, I’ve had new customers, it’s worked out really well,” says Barone. “These are all things we wouldn’t have done. As indie booksellers you’re always looking for fresh ideas and ways to draw people into your store. And now that you can’t do that, how do you reach out?”

Barone reports that Curiosity House is doing well, considering that February through May traditionally represents the store’s slow season. “Sales are up from last year,” she says. “There’s a real surge in supporting local. I have customers that I never had before.”

The increase in sales and demand for delivery has meant long hours for the Curiosity House team of three staffers. Barone, who learned new tech skills refreshing the store’s website, has found herself working long nights and answering email requests during the late off-hours. “It’s hard for me not to respond,” she says. “It’s good though; it beats the alternative.”