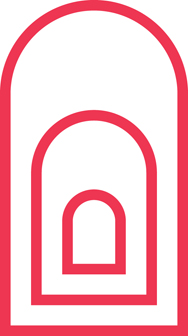 The old logo was inspired by Hamilton’s neoclassical mansion Dundurn Castle; the new logo takes a detail from the original, an arched window, and reimagines it in an electric magenta. The logo is intended to symbolize the company’s new openness.

“I’m excited that we’re becoming a contemporary, forward-facing business,” publisher Scott Fraser says. “With a new street-level retail storefront opening later in 2021, we’re opening ourselves up to the community and publishing innovative books in a welcoming environment, instead of behind the walls of Dundurn as a castle.” The store, located at 1382 Queen St. E., will sell Dundurn titles. The space doubles as the press’s new office, with workstations in back for employees who don’t wish to work from home.

The rebranding comes with a new mandate. In full, it reads:

“Dundurn Press aims to publish contemporary trade fiction and non-fiction, focusing on works that amplify and elevate exceptional Canadian writers and important stories that reflect the world, satisfy curiosity, enlighten, and entertain. Our books will provide a portal into a place not yet known to the reader, where new voices and stories will be discovered. We invite readers and writers into a new home for previously underrepresented voices in our diverse cultural and literary community. Like our readers, we’re curious, courageous, and forward-thinking. Read with us. These are your stories.”

Dundurn was sold in 2019 to tech entrepreneurs, including Lorne Wallace, Jason Martin, and Randall Howard. A new e-commerce website will also launch next month.