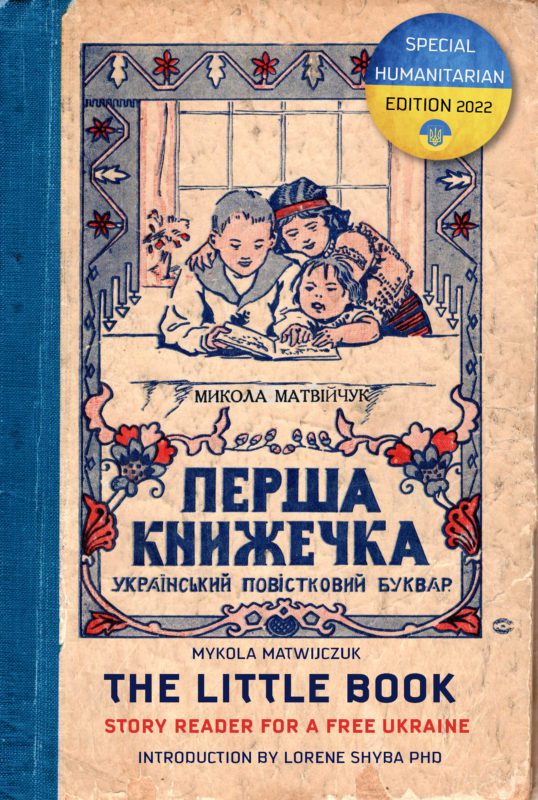 Lorene Shyba, publisher of Durvile Publications, has spent the last several years working with Dene elder, Raymond Yakeleya, developing a series of Indigenous language books with the aim of preserving languages under threat of extinction. “Culturally, it’s so important to tie language in with the whole cultural phenomenon of a people,” she says. “I have never really thought about my own heritage as Ukrainian because, unlike [for] Indigenous languages, there was always the old country.” But, when Ukraine came under threat over two weeks ago, that changed, and Shyba felt compelled to help her ancestral homeland. She decided to drop in a title to her spring list called The Little Book: Story Reader for a Free Ukraine, with proceeds going to charity. Shyba enlisted the aid of Magda Stroinska, a professor of linguistics and languages at McMaster University, to translate the book originally published in the 1930s for the Ukrainian-Canadian community in the prairies.

The Little Book will be released on March 31. Edmonton’s Audreys Books is taking pre-orders, it’s also listed on Amazon.ca and Bookmanager, and will be available on Durvile’s website. Proceeds from sales of the book will go to the Canada-Ukraine Foundation, a Canadian charity sending aid to support Ukrainian refugees in Europe.

How did you come to know of The Little Book: Story Reader for a Free Ukraine?
SHYBA: I have a copy that has my aunt’s name on the front of it. She probably brought it home from school. The copy is the corrected edition from 1940, but it looks like it was originally published in 1932. I have had this book ever since I was a child. That’s the value of a book, right? That it brings back all those memories. I’m sure I wasn’t more than three or four or five years old when my babka [grandma] would put me on her lap, open up the book, and we would go through all the letters. My grandmother was bound and determined that I would speak Ukrainian. Both my grandmothers were born here. That’s how deep the history of the diaspora is – I am now third generation Canadian. And yet, there’s this strong allegiance to the old country.

Is The Little Book: Story Reader for a Free Ukraine a prose book? A book of poetry?
SHYBA: The direct translation of the title of the book is First Little Book. I decided for the translation to drop the word first, it just wasn’t necessary. The book starts out for preschoolers. Pictures are paired with the associated sounds. For example, the sound hehehehehe is paired with a horse. And then it includes stories that you would read up until you’re in about grade 9. The alphabet, of course, is a very important part. For this reprint, I’ve taken the alphabet, originally placed in the middle of the book, and put it at the very beginning. Then we added the English equivalent sound to the Ukrainian Cyrillic letters. About half the book is made up of short stories that go along with the letters.

What are some of the themes in the book?
SHYBA: One of the themes is respect for your new country, and it also talks about the old country and of respecting the heritage. Farms, families, cultural values are major themes. Family is so central and there is so much love for children in Ukrainian families. Farms are significant because most of the kids lived on farms. I would add that books from the 1930s, from just about any culture that you look at, have really old-school values. Gender roles show little boys playing trains, and the little girls playing dolls. I grew up with that. Little did they know I was going to turn into such a feminist, but that’s all part of the cultural values of that era. It will be interesting to see if there’s significant reaction to that.

Can you speak about the process involved in reissuing the book?
SHYBA: The translator and I both looked for any kind of breadcrumb trail to who the original editor and illustrator (Mykola Matwijczuk) might be. We found the family name in Canada, but also in Poland, Paraguay, and Brazil. We couldn’t find the editor, but the family is part of the diaspora. We have every reason to believe the book is now in the public domain. And even if somebody comes forward and says, hey, that’s my great-grandma, would they be upset that we’re publishing a book with proceeds going to a charity at such an urgent time?

For the art, will you be taking photographs of an original copy and then inserting them into a new typeset? Or, will there be new art?
SHYBA: There’s only one picture that’s new, and that’s the picture of the new edition and the old edition. The illustrations are so lovely. How could we possibly add anything more charming? The original is black- and-white line art so it has been easy to scan and reproduce.

What kind of response have you received to the project?
SHYBA: My heart just bursts when I think about this, just absolutely bursts. I talked to two different printers, Blitzprint in Calgary, Friesens in Winnipeg, and they both donated their services for this book. Can you just imagine a printer saying we’re not going to charge you?

The other tremendous response so far has come from our sales people. They are really talking it up. The first order that came in was from Audreys Books in Edmonton: they ordered 150 copies and are donating their sales proceeds to the foundation as well.

Can you speak about the process of translating the book for an audience nearly a century after its initial publication?
STROINSKA: There were lots of issues with this translation. Many words have changed. I think the book was written in the dialect from Western Ukraine, which was much closer to Polish than modern Ukrainian. If you are using online translation aids like Google Translate, this is not the language you will find when you check Ukrainian. I felt like Sherlock Holmes sometimes. I also sought help [from] a Ukrainian colleague, Nikolai Penner, who also teaches linguistics and languages at McMaster University. If I was completely at a loss, I would email him the fragment I was struggling with, and he very generously helped me. His mother and his mother-in-law just arrived in Canada, so he said the text was double-checked by two Ukrainian grandmothers.

What does it mean to you to be part of this project?
STROINSKA: It means a lot because my father’s family comes from Ukraine. They were Polish, but when my father was born in 1900, Western Ukraine was part of the Austro-Hungarian empire. And at that time I think the relationship was very positive. Also, I was brought [up] on [the story of] my father’s first wife spending her summer holidays in Ukraine in 1939, where her parents were from, when the Second World War started. The Russians invaded from the East while the Germans invaded from the West, and she never made it home. She perished during the war. The current war is such a horrible act of aggression, creating suffering for innocent civilians, including many children, so working on this children’s book is such a positive thing. I can help by donating money or helping to [provide] aid, which I have been doing as well, but this book is something that will stay with people. So I’m really very happy to be part of this project.

Update, March 10: The story has been updated from the original to reflect that, in 1900, Western Ukraine was part of the Austro-Hungarian empire, not Poland.