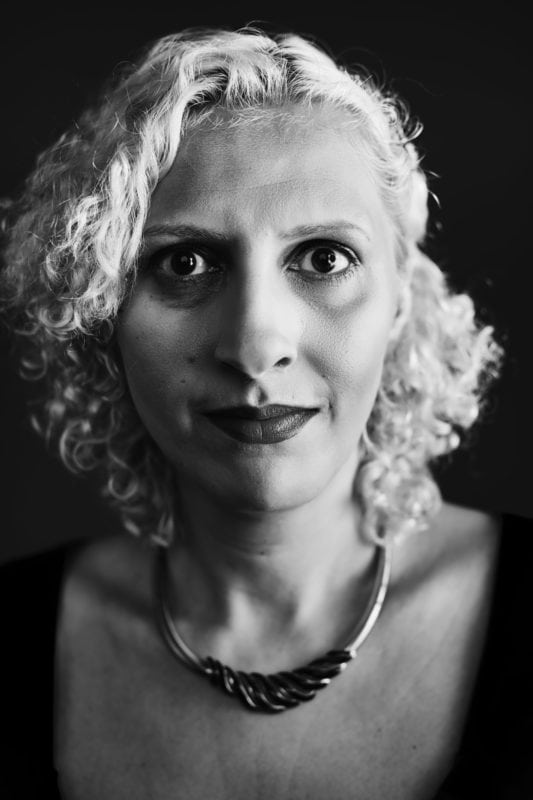 I wonder if
this is what
death looks like –
heaven or hell,
that’s up to your
own interpretation

In 2015, Priscila Uppal participated in an event dubbed “Poetry Games” at what was then known as the International Festival of Authors in Toronto. A group of poets – including Damian Rogers, Andy McGuire, Stevie Howell, Shane Neilson, and Alexandra Oliver – were invited to compete for the opportunity to accompany an IFOA delegation to the Bookworm International Literary Festival in Beijing. When it was Uppal’s turn to read, she ascended the stage wearing a sports shirt with the word “Beijing” emblazoned across it. Before stepping to the podium, she turned to face the audience and executed a perfect Usain Bolt victory pose: her long, runner’s body crouched low, left arm cocked, right arm extended to its full length, like a manifestation of electricity in human form. She then walked to the podium and delivered a note-perfect reading.

The juxtaposition seems to encapsulate what was most apparent about Uppal, who died last week at age 43 after a long struggle with a rare form of cancer known as synovial sarcoma. Uppal loved life and lived it with defiant abandon, travelling the world, running marathons before breakfast, and belting out tunes during one of her many karaoke parties. But when it came to the work, she was deadly serious.

And what a varied and eclectic body of work it is. Poetry, plays, novels, stories, and memoir: Uppal not only seemed equally at home in each genre, she was never content to repeat herself, always searching for new forms of expression, new ways to challenge her style and sensibility. “Priscila was different and as her bibliography shows, she was prolific and fearless in testing herself in every genre,” says Denis De Klerck, publisher of Mansfield Press. “Even in her twenties she already had an incredible confidence in her mission as a writer and a work ethic that was steady and (something rare) joyful.”

The work ethic is indeed something to marvel at. This fall, Mansfield is set to publish not one, but two books with Uppal’s name on them. The first is a book of poetry called On Second Thought; the second is an anthology of poetry about cancer co-edited by Uppal and her longtime friend, colleague, and collaborator Meaghan Strimas, who sat at Uppal’s bedside in the days before she died going over edits to the manuscripts.

“Even though she’s been sick for the past several years, she still achieved more than the average person, by far,” says Strimas. “She’s published multiple books, she’s taught, she’s been an amazing friend, she’s travelled, she’s put on plays, she’s had fun. She just kept going. And her attitude was so positive and hopeful, and it was infectious. Because she believed it was all going to be okay, I think we all believed – her closest friends all believed so, too.”

Because I won’t waste a single, glorious, precious day. Promise.
Because I’m too young.
Because I haven’t constructed a bucket list.
Because we’re renovating the deck.
Because nobody else brings the house down at Hal’s Carpark in
Barbados with “Total Eclipse of the Heart.”

“A Plea: Against Valediction (I)”

Uppal was a teacher at York University and mentor to numerous younger poets and writers in Canada. “Priscila believed in my work before I did,” says poet Adebe DeRango-Adem. “Her aura always bore the light of invitation. No other poet for me could translate gravitas and pain into curative incantation.”

“She did anything and everything to prepare and promote her students and to support and celebrate her friends. And, as a friend, she was there for a heart-to-heart or game to dance, sing, or just kick back over cocktails on a gorgeous day,” says fellow poet Daniel Tysdal. “Priscila was a true everythingist, an anythingist. She could write everything – poetry, fiction, creative non-fiction, theatre, criticism – with her distinctive blend of insight, humour, strangeness, and pain.”

The poet and essayist Canisia Lubrin expresses Uppal’s influence succinctly: “Priscilla Uppal saved me.” Lubrin was Uppal’s student during a time in the younger poet’s life when she was seriously considering turning her back on a career as a writer. “With a few simple yet profound gestures she saw the writer in me,” Lubrin says, “and got me to believe again. She was one of those rare people who knew exactly what to say when you needed to hear it. She did not ever ask for thanks or praise or credit. She gave of herself, her talent, her beauty, and her brilliance and did not once ever remind you of what she’d given.”

I shouldn’t be embarrassed to tell you,
but I am, that I’ve also cried so much in the last
several months my students should be collecting my tears
to keep me honest. This is all good fodder
for fiction, I can hear them say.

Uppal was also an intensely modest person, congenitally averse to self-pity or self-promotion. She had a Facebook page but she very rarely updated it or posted on it. After her cancer diagnosis, when asked how she was doing, she would answer honestly – but briefly – then deftly change the subject. Even in her more public personae – as the poet-in-residence for the Vancouver winter Olympics and then again at the 2012 London Olympics – she used her platform to promote others rather than valourize herself. It’s no accident or coincidence that one of the adjectives most frequently applied to Uppal is “generous.”

Which is not to say she was opposed to self-examination. She simply kept that material where she felt it belonged: in the work. In 2014, Uppal published a memoir called Projection: Encounters with My Runaway Mother, which details the 10 days she spent in Brazil reconnecting with her mother, who had abandoned her and her father when Uppal was only eight years old. The book – which was nominated for the Hilary Weston Writers’ Trust Non-fiction Prize and a Governor General’s Literary Award – is searing and almost defiant in its refusal to shy away from painful subject matter and fraught personal history. But it is also, primarily, a work of literary art.

Speaking with Shelagh Rogers in 2014, Uppal talked about the way art can be used as a vehicle for considering life: “It’s a very real way in which many of us attempt to understand the difficult people in our lives – through art. We look at the role models in art, we look at the representations of mothers and fathers in fiction, in the movies, and we ask ourselves, ‘Is this like my relationship? What can I learn from this relationship and take back with it?’”

Uppal’s faith in the power of art and storytelling to speak to us, to reach across boundaries of time and space and experience, to touch us, and to heal us was resolute and is apparent on every page of the body of work she has bequeathed to us. “She was, as anyone who knew her will tell you, one of the true, great lovers of story,” says Lubrin. “Priscila was the kind of woman you did not know you needed until she arrived. And I know she will keep on arriving in everything she’s left behind.”

Where did I come from?

Makes me uneasy to write a line like that. It’s embarrassing.
Fundamental questions usually are.

We prefer to dress them up in tulle and glitter,
in hair shirts or military uniforms. Send them straight
to the monastery or open bar.

Besides, I’m not sure I, personally
(if there is such a thing as a person),
really care.
My father and mother don’t interest me
as influences –
as though I studied their methods
but didn’t retain enough of the lessons to set up my own practice.
I mean I’m childless for a reason.

And I never was one of these genealogical freaks.
That is truly embarrassing.
Tracing your family roots back to the Mayflower
or Black Plague or Ming Dynasty.

I came.
Where from, although a fundamental question,
is irrelevant.
I can’t stop the past.

I probably can’t stop the future either
but that’s where my feet
are taking me.

Where am I going?

Just as embarrassing as Where did I come from?
but scarier.

Why do I assume a god would be sad?
What does this say about where
I am going?

Each breath I take is a prayer bead.

Up to the next breath.
And the next.

Here is my fundamental problem:
the future-me has left the porch light on.
But will she recognize me?

Will I recognize light?

NOTE: The poetry in this piece is excerpted from On Second Thought by Priscila Uppal. Courtesy of Mansfield Press.