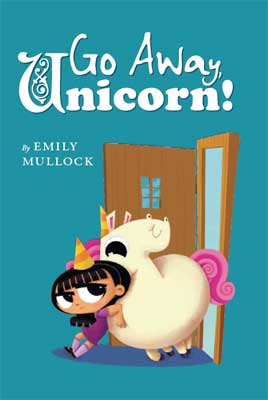 It’s been a journey, but the animated kids TV show Go Away, Unicorn! will finally launch in Canada on Sept. 7 on YTV. It will also be shown this fall in the U.S. on the Disney Channel – and later in other international markets, too. Kidlit readers might recognize the series from the 2010 book of the same name, by debut author-illustrator Emily Mullock, and published by Tonya Martin and Meghan Hague, co-owners of the New Westminster, B.C., press, McKellar & Martin Publishing Group.

The picture book – which tells the story of young skeptic Alice and a unicorn who crashes her birthday party – was part of McKellar & Martin’s debut slate. “We really loved the idea of a different kind of unicorn story for the intended [four-to-six] audience,” says Martin, referring to the fact that Alice, unlike most kids her age, initially rejects the unicorn’s friendship. First optioned in 2012 by Tricon Films and Television and Mercury Filmworks, the show had a less-than-smooth ride to production when Tricon went into bankruptcy protection in December 2016. “The whole Christmas holiday we were stressed about what was happening with our property,” remembers Hague. Luckily, a few months later L.A.–based Sonar Entertainment came to the rescue and bought the show in development.

Hague and Martin are veterans of the industry – who met while working at Raincoast Books – but this was Hague’s first time going through the optioning process, and Martin’s first time managing a major deal like this without the resources of a larger publisher. “I worked at Scholastic in New York for almost 15 years, and so I’ve been through the process before, but we also had a licensed products department, and a massive legal team,” says Martin. “It is different when it’s your own company, and you’re handling everything. Then you find out Disney is on board and it becomes, ‘Wow! Here we are, this small little trade house with this massive opportunity.’ It’s a lot, but it’s a wonderful thing.”

Of course, it’s also validating. “For Tonya and I, deciding to leave the bigger houses and try it out on our own, it’s very rewarding to know that our eye and the things that appeal to us, work in the market and they’re of the calibre of Disney’s liking as well.”

Mullock, who coincidentally works as an art director at Disney Games and Interactive Entertainment (a lot of her time is spent on Club Penguin, an online social network and game for kids), says she feels lucky to have Martin and Hague on her side, especially given her lack of experience. “I had done some illustration work for Meghan at that time, but I was a first-time author, and they really supported me and trusted that I could write a full story and match it with illustrations that told the whole flow of it,” she says.

Although Mullock went to school for animation, she hasn’t been involved in this production. In an early version she saw, some details were different from the book – including Alice’s clothes – but the heart of the character was on a similar track. “[The book] Alice is just real buttoned up; she’s serious. What I’ve seen from the show is she’s very much an achiever.”

But how Alice and the unicorn are translated in the final product remains a mystery to Mullock, who says she’s planning to go all-out for the big reveal. “I’m definitely more of a unicorn than an Alice, I will say, so I’m very excited to plan an epic Saturday morning cartoon–style party for this.”