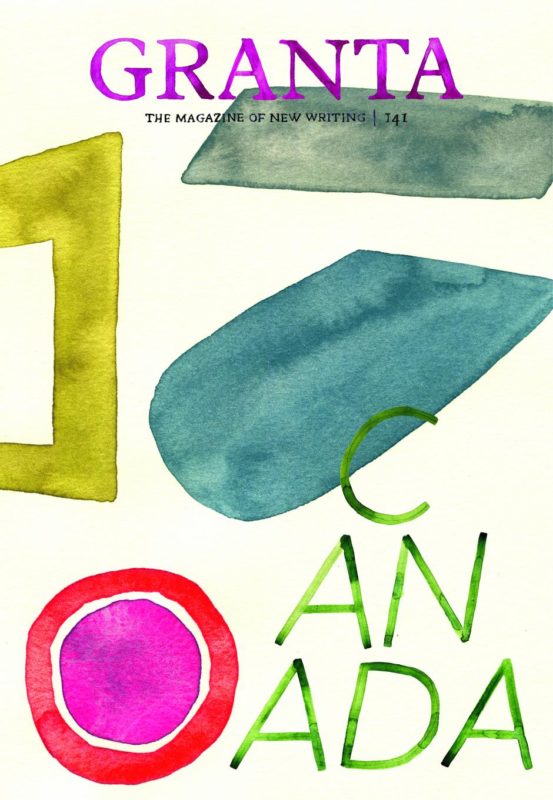 When guest editors Madeleine Thien and Catherine Leroux finalized the lineup for Granta 141, a special issue of the renowned literary quarterly dedicated to new writing out of Canada, they included an essay by Acadian writer France Daigle called “What Is It that Hurts?” The piece is about the linguistic disquiet that has persisted in the Acadia region of eastern Canada since the English began their systematic conquest of New France in the mid-1700s. Though francophone writer Daigle asserts that it made “perfect sense” to compose the Granta essay in English, since she knew she would be addressing an audience of English readers, she nevertheless admits to a sense of unease at the tenuous grip maintained by the French language throughout Acadia’s history.

The constant imperative to shuttle between English and French has led Daigle to believe that “our relationship to our mother tongue is not primarily sentimental or emotional, but deeply physiological and that constant and untimely disruptions and repetitive stresses induced by changing language and cultural channels cause what could be called a linguistic neurosis.” (How much more acute must this “linguistic neurosis” be for Indigenous peoples, who are in constant real danger of having their languages extinguished at the hands of a dominant settler colonial tongue?)

“The Discomfort Zone” could serve as a subtitle for the Canada issue of Granta, at least so far as Thien and Leroux have conceived it. “We didn’t really work with a theme,” says Leroux. “I think the only thing we had in mind before we started receiving submissions was the word ‘dissonance.'”

This dissonance – Thien’s preferred term is “tension” – is apparent right across the selections in the issue on a linguistic, thematic, and visual level. Rawi Hage’s stark photo essay of circus performers opens with a black-and-white shot of a shirtless man tattooed with bones, innards, and organs; his brain appears to protrude from a missing skullcap and teeth poke through an illustrated hole on his cheek. A different kind of dissonance is apparent in Paul Seesequasis’s collection of archival photos comprising “images of Indigenous life that [reflect] integrity, strength, resourcefulness, hard work, family, and play” – all of them taken during the period that the residential school system was in operation across Canada.

None of this, it should be noted, was planned on an editorial level; the continuity in the disruptive aspects of the various entries only became apparent as Thien and Leroux went about putting the anthology together. “We did it from the ground level up,” says Thien. “We had all this work coming in and then we just tried to see what it was saying.”

For the two guest editors, the appearance of Granta 141: Canada is the culmination of a year-long endeavour that began during dinner for the 2016 Man Booker Prize. Thien, whose novel Do Not Say We Have Nothing had been shortlisted for the award, found herself seated beside Sigrid Rausing, the quarterly’s publisher. For some time, Rausing had been toying with the idea of devoting an issue of the journal to new writing out of Canada, and in Thien she found someone with whom to discuss the kinds of things that might be included and what such a publication would look like.

That conversation led to an invitation to come aboard as guest editor – an invitation Thien promptly refused. “I’m pretty sure initially I just said no,” Thien says now. “But she told me to take some time to think about it.”

One thing Thien knew from the start – even before she had been persuaded to participate in putting the issue together – was that if she were to agree, she would need a co-editor. “It’s not something you can do on your own,” she says with characteristic modesty. “You need someone else’s way of thinking about things. You need someone else to bounce ideas off.”

Thien had recently met Leroux, as both were on the shortlist for the 2016 Scotiabank Giller Prize (an award Thien would go on to win). “When we met prior to the Giller gala, we really hit it off, we really got along,” says Leroux. “She was reading my book [The Party Wall] and liking it, and I was reading her book and obviously I was hypnotized by it.” (So hypnotized, in fact, that she undertook a French translation of Do Not Say We Have Nothing, which will be published by Éditions Alto in fall of 2018.)

Once they had committed to the project, Thien and Leroux sent out an open call for submissions, augmented on the French-language side by some targeted solicitations, as both editors rightly understood that Granta was not as well-known in French Canada.

“It was important to open the call for submissions to everyone,” says Leroux. “First, because I think we wanted to be surprised. We didn’t want to be the determining factors in what would be included in the issue. We wanted to be as open as possible to what came. And as a way to grasp l’air du temps. Not to be the lens through which everything would come, but just see what came, what people had to say.”

What people had to say was, for both editors, surprising and unsettling in its challenge to accepted pieties. “The word Madeleine uses a lot is ‘combative,’ and I agree with that,” says Leroux. “There was a will to shake things.”

And a will to burst the stereotypes of the country for an international audience. “Canada has this reputation of being this friendly country where everybody gets along and nobody locks their doors,” Leroux says. “And I think we didn’t see it that way, being a racialized woman and a woman from Quebec, having grown up with all sorts of issues around language or race or politics. It never felt like this was a happy-go-lucky country to live in. And I think we were both interested to see if other writers felt that way, and to show a different side of Canada.”

Like Leroux, Thien values what she refers to as the “ideas in collision” that abound throughout Granta 141: Canada. “That’s actually what our literature is,” she says. “Thinking that it would be a unified way of looking at the world would be such a slim literature. I think what I love about the process of putting [this issue] together was seeing everyone struggle against the flattening of language. That gives me hope.”