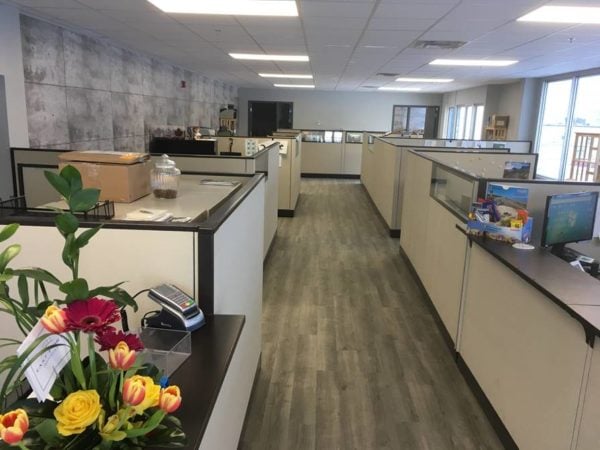 With its 40th-anniversary celebrations on the horizon, Nimbus Publishing is getting settled in a new home in Halifax’s north end. The company has experienced rapid growth in recent years (31 per cent between 2014 and 2017, according to Publishers Weekly’s list of fastest-growing indie pubs), and the old digs just weren’t cutting it any more.

“The warehouse staff had been asking for more space for a couple of years,” says Nimbus managing editor Whitney Moran. Production manager and co-owner Heather Bryan notes that the old warehouse was so packed the company rented storage space in a nearby industrial park to handle the overflow. “It was a constant problem,” Bryan says, “trying to fit new books in, always shuffling things around.”

With the lease on their old location up for renewal, and the future of the building uncertain, general manager Terrilee Bulger says the new space had lots to recommend it. Increased floor space (1,672 square metres compared to 1,313), with higher ceilings, means the warehouse can grow vertically as well as horizontally. The whole team is on the same floor, which was not the case half a kilometre away at the old space. And, Bulger says, the company paid for space it couldn’t really use, like stairwells, a furnace room, and part of a loading bay. With a better layout and workflow, she says, “It feels like we gained a lot of space.” And $350,000 worth of renovations by the new landlord mean Nimbus’s new location is more energy efficient as well, from its light bulbs to its HVAC system.

Like the old location, the new one is in a light industrial area of Halifax, with a Salvation Army and a paint store across the street. But there are offices and residential neighbourhoods nearby, and a gym about to open. All potential customers for Open Book Coffee, hopes Joe Tinney, who expects to launch a coffee shop and bookstore in May to coincide with Nimbus’s anniversary celebrations. The bookstore will offer mainly Nimbus and its client publisher titles, and will include an event space. Tinney’s excited about the possibilities. “It’s a chance to bring the literary community of Halifax together,” he says. Tinney acknowledges the coffee shop won’t get walk-by traffic, but “this location is a nexus for people coming from the peninsula, across the bridge from Dartmouth, coming from Bedford, Clayton Park – it’s a hub on a wheel.”

There’s another benefit to having Open Book on site, besides Nimbus staff being able to grab an Americano and a bagel. The coffee shop will pay rent, which will help offset some of the higher costs of this new location, and there’s a multi-purpose room that can be hived off with a sliding door. Bulger envisions this being rented for meetings, workshops, book launches, or even yoga classes – the space also includes a shower and a kitchenette.

The new location also offers visibility. Nimbus was notoriously hard to find in its old location – Moran almost missed her job interview seven years ago because she couldn’t find the place – with very little parking. The new location is on a main street, with a big sign that will soon bear Nimbus’s new logo. There’s ample parking, and even a view of the Halifax Harbour, from what will be the patio of Open Book. Though Nimbus is still growing – last year the company published 55 new titles and 14 new editions, well beyond its usual output of 35 to 40 books a year in recent years – Bulger and Bryan are confident the new space, for which they’ve signed a 10-year lease, offers them plenty of room to continue to grow.