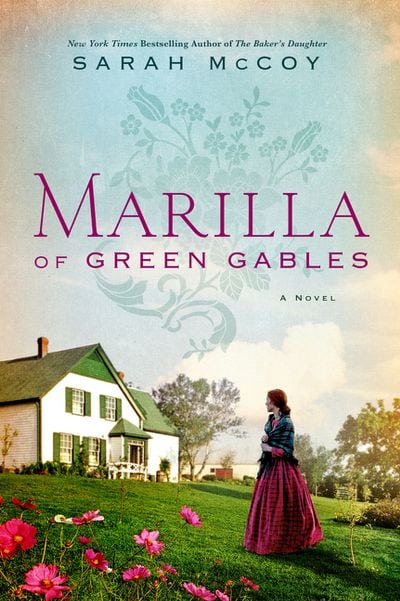 Something magical happens when L.M. Montgomery–obsessed readers get together. We cannot help ourselves. Our secret handshake does not involve intricate gestures, but instead a deeply embedded linguistic code that differentiates a true devotee from someone who is just dabbling in Montgomery’s Anne of Green Gables world. U.S. writer Sarah McCoy is a true devotee. Her new historical novel, Marilla of Green Gables (HarperCollins, Oct.) is a beautiful read and is true to the character of Marilla Cuthbert – the woman who adopts Anne Shirley – and to the spirit of Montgomery’s Avonlea. The New York Times–bestselling author of The Mapmaker’s Children spoke with Q&Q about what it was like to write a new fictional world based on a Canadian classic, and the tragic romance between Marilla and John Blythe.

What was your first experience with L.M. Montgomery’s Anne of Green Gables?
I have a vivid memory of my mother with the book on her lap reading the novel to me when I was about four years old. We were a military family stationed in Germany. There was very little cash flow, so the copy she read from was a library copy. Then, my Aunt Gloria got me this bible-sized, three-book volume with the tiniest print. I remember my seven-year-old self thinking that I would never get through it solo. It was too big, too many words. Within a year, I had read it all. I knew it in my head, and in my heart. I was in love with Montgomery’s world. It fed my spirit – and continues to do so now.

Do you remember your first impressions of Marilla?
Yes. My mother is not a coddler and I’m very grateful for that. She’s an empowered, encouraging, fierce woman who I adore. So, in many ways, Marilla reminds me of my mom. I was a wistful and dreamy child, and she loved me, but she wouldn’t put up with my “Sarah-ness.” I related to Anne: she has Marilla in her life to ground her and teach her how to harness her creativity into productive social achievement. Marilla is warm but reserved in her affections. There’s something fascinating about people who are more closed hearted. If you’re the one to crack their shell, the relationship feels incredibly rich and ready to grow deep roots. When Marilla opens up, we, as the readers, feel that we had a part in that renewal journey.

How did you approach Marilla’s character and were you concerned about how people might react to a character they have particular ideas about?
I went back to the novels and circled in purple pen (in tribute to Marilla’s amethyst broach) anytime Marilla is mentioned, spoken about, or speaks herself. I didn’t base the character traits on Montgomery’s life, but the fictional world she created. Marilla of Green Gables lives and breathes in 1837 Avonlea, not Montgomery’s 1908 Cavendish. It is very important to me to tell people that I’m not Lucy Maud Montgomery. I’m Sarah McCoy who loves Green Gables and wishes to play homage. It’s my dreamscape for Marilla.

How much did Gilbert Blythe inspire your John Blythe character?
To say Gilbert Blythe was one of my first book crushes would be an understatement. I mean, my husband was already named Brian, so I named my dog Gilbert and I dote on him similarly. I thought Gilbert Blythe was the absolute of what I wanted in a romantic relationship and life partner. So, to be able to write his father John Blythe’s story was beautiful and an incredible honour. He’s flawed but noble, prideful yet humble, lusciously imperfect – all the things that make a wonderful character.

You place Marilla in a very particular time in history, highlighting political and religious divisions in Avonlea –and in North America. What questions emerged when you put Marilla into these circumstances?
Avonlea is fictional, but PEI and Canada are real. I asked myself what are the actualities of this fictional place? I educated myself on Canadian history and what was happening when Marilla was young. Canada was a hotbed of political intrigue. I quickly discovered that this story is about hometown contradictions, personal identity, the decisions we make, and the ones we wish we’d made differently. Compared to Anne Shirley, Marilla is a darker character; so I was able to explore depths of social contention and personal conflict that are only quiet shadows in Montgomery’s original series. I also brought to this book the knowledge I accrued about the Maritimes’ role in the Underground Railroad from my last book (The Mapmaker’s Children). This was a major issue of the time, but something that was not written about by the Victorian authors or spoken about by the people. Marilla continually proved herself to be an empowered character, so I thought it entirely plausible that she’d secretly aid the less fortunate in a mighty way but never tell a soul. Marilla being ‘plain Marilla’ would’ve done good for the plain good of it.

Melanie J. Fishbane is the author of the YA historical fiction novel, Maud: A Novel Inspired by the Life of L.M. Montgomery (PenguinTeen, 2017).