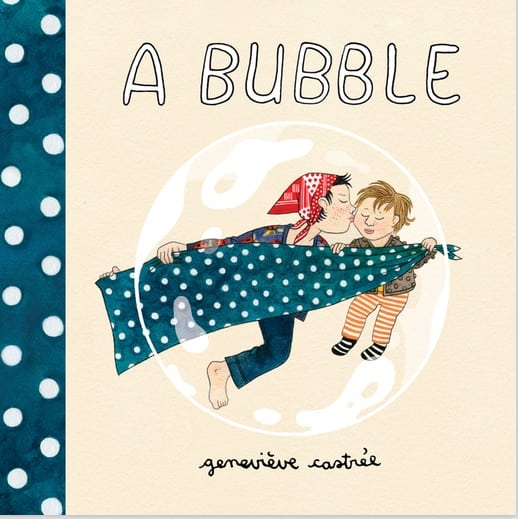 “In her final weeks alive, Geneviève clung to finishing this book for our daughter with intense focus and devotion. I think she was trying to cast a spell, to draw herself into survival. She didn’t get to finish.”

This message from Phil Elverum, husband of the late Québécois comic artist and musician Geneviève Castrée, graces the final page of The Bubble – a board book Castrée created for her toddler-aged daughter before dying of pancreatic cancer in 2016 at their home in Anacortes, Washington. “It was toward the very end of her life when she began working on this, “ says musician Elverum, also records under the name Mount Eerie. “She’d been in cancer treatment, mostly hard-core chemo but also lots of alternative stuff, for almost a year. She was really consumed in spirituality and magical thinking and stuff like that. I think the idea originated in a creeping recognition that she may not live, a thought she outwardly pushed away but must have known on some deeper level, and maybe she had a desire to leave something tangible and direct for our daughter, some attempt at explanation of why she’d been so absent during this first early year of our daughter’s life. Also, it was just what she did, translating all of her thoughts and feelings into creative work.”

While first and foremost a gift to their child, Castrée did intend for the book to be published. In it, a young mother lives in a bubble inside the family house, and throughout the day the child joins her in the bubble for snacks, naps, drawing, and playing. Elverum brought his wife’s original illustrations and text to Drawn & Quarterly (who published her acclaimed 2012 graphic novel memoir, Susceptible) and worked with Castrée’s friend and fellow illustrator Anders Nilsen to finish the project. Nilsen drew the bubbles, based on instructions Castrée left behind. He also did the text lettering, mimicking the beautiful loopy cursive style that Castrée used in Susceptible. “Anders and I discussed whether to “finish” [the illustrations] or not, and how much,” says Elverum. “We decided ultimately that it would be better to bring it to a point of easy readability rather than burden it with the awkward unfinished look, too cloaked in its context to be functional as a standalone thing.”

D&Q senior editor Tracy Hurren was intent on honouring the artist’s vision and followed any instructions Castrée left behind. “To have that final artistic endeavour fulfilled and seen through to completion is very satisfying [for all involved],” she says. “I think there’s a lot of value in the book for parents and children going through the same thing, and on its own as a beautiful art object.”

While the book is inherently sad, young children will likely focus on the tender bonding moments between mother and child and not the themes of sickness that are implicit in the illustrations. For their daughter, says Elverum, “so far it’s just one of the many Geneviève books we have, [but] one that happens to have pictures of her in it. I don’t bang her over the head with it. She knows that her mom died. We talk about everything openly and with love. I have yet to really understand what other peoples’ relationship with this book might be, adults or kids. It’s too close to my own household to have any perspective on.”