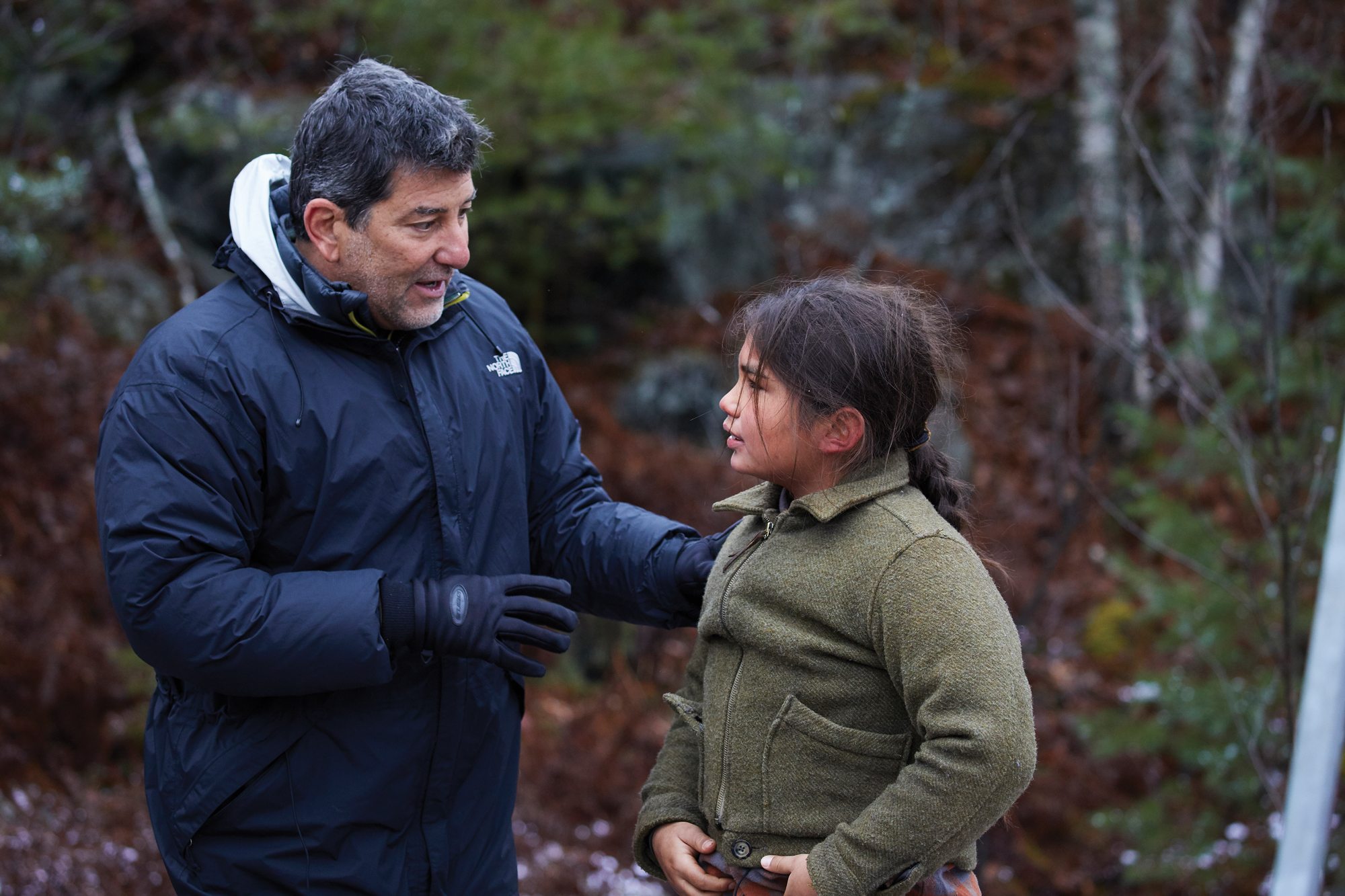 It was his voice that caught her attention. On a Friday in early 2012, Christine Haebler, a producer at Screen Siren Pictures, was driving to work when she heard Richard Wagamese on CBC Radio talking to host Shelagh Rogers about Indian Horse, his novel about an Ojibwe boy named Saul who is traumatized at a residential school and finds possible salvation through hockey. For years, Haebler and Trish Dolman, Screen Siren’s founder, had been looking for a powerful story to put on screen that could raise awareness about the horrors of residential schools. Here it suddenly was, being discussed by its author in a voice that moved Haebler and created a sudden urgency in her. “My heart was pounding, and I felt like we had to get on this right away,” she says.

Still in the car, Haebler called on her assistant to inquire about the adaptation rights (represented by Wagamese’s literary agent, John Pearce at Westwood Creative Artists), and by the time Haebler arrived at her office, a digital copy of the novel was waiting for her. She and Dolman read the book over the weekend and came to the same conclusion. “By Monday morning, we [had] decided that it was something we needed to make,” says Haebler.

The producers reached out to Wagamese about granting them the rights, emphasizing that they didn’t want to take the story from the author, but tell it with him as a partner. This wasn’t just because Haebler and Dolman felt that, as two non-Indigenous women, it wasn’t their story to tell: it was because a movie version of Indian Horse couldn’t work without Wagamese. “We believed it was important to have his voice,” Haebler says. “That was key to the success of the film.”

Within a week, the author had approved their pitch, and Indian Horse was on its way to becoming a film, which premiered at the Toronto International Film Festival in 2017 and opens in wide release in Canada this April.

Haebler and Dolman made good on their promise to have Wagamese involved from the outset. The author declined to adapt Indian Horse himself in order to focus on other work (including his next novel, Medicine Walk), so the search for a screenwriter began. Wagamese was given a list of candidates to consider, and chose playwright, author, and screenwriter Dennis Foon – in large part because of Foon’s long history of thoughtful and socially conscious work. When the producers called to gauge Foon’s interest, he had one condition. “Without [Wagamese] with me every step of the way, I can’t see how it can be done,” he told them. Assured that Wagamese’s involvement was already part of the plan, Foon became the next member of the storytelling team devoted to preserving the author’s vision.

Wagamese would go on to read every draft and offer minor notes – particularly around doing justice to the hockey portion of the novel and the handling of the third act. Foon relied on Wagamese to approve language and dialogue in the script and to ensure the author’s intentions – and his characters’ – were being preserved. Foon was also eager to remain true to Wagamese’s visually rich prose, seizing on images ready-made for the screen. “It’s like a candy shop for a screenwriter,” says Foon.

The visuals would also prove a draw for the film’s director. After reading the novel and a draft of the script, Stephen Campanelli, a frequent camera operator for Clint Eastwood (who, along with Roger Frappier, signed on as executive producer), felt compelled to be a part of bringing Indian Horse to the screen. Campanelli wrote a passionate five-page letter to Haebler and Dolman, who shared it with Wagamese. Campanelli got the job, in part because, like Foon, he felt dedicated to Wagamese’s words and wanted to put as much of the book into the film as possible.

As successful as those involved in the film were in keeping the script true to the author’s novel, one aspect proved problematic. Early notes from financial backers expressed concern that the sexual, physical, and psychological abuses committed against the Indigenous children in the book would be too difficult to watch. “There are a lot things you can write in a novel that an audience can handle that are very difficult for an audience to handle when they see it on a screen,” says Dolman. The filmmakers’ challenge became finding a balance between showing the abuse and not making something too horrifying for viewers to sit through.

Shirley Williams, a professor emeritus with Trent University’s Chanie Wenjack School for Indigenous Studies and a residential-school survivor herself, knows first-hand the importance of depicting the abuse as it happened. It’s something she helped facilitate as a cultural consultant on the film. “For them to make it as precise as possible really made me aware of what they were doing, and also happy that they were doing that, because a lot of people don’t believe us. Now, if they see it, I think they will truly believe,” Williams says.

In the end, the violence was scaled back, with Wagamese’s approval. “Richard was completely supportive,” Foon says. “He totally understood the visceral difference between the written and visual image. I believe he felt the screenplay powerfully and honestly represented the abuse in the schools.” With that major obstacle dealt with, shooting could begin.

Principal photography on Indian Horse began in October 2016, and Wagamese continued to be deeply involved with the movie. He helped approve locations, weighed in on casting, and watched dailies from the early days of shooting. He even auditioned for the role of Fred Kelly, the Indigenous hockey coach who frees Saul from the residential schools.

But by the time production wrapped a mere 32 days after it began, Wagamese’s health was deteriorating. Haebler and Dolman visited him in hospital in January 2017, and though he was ill, they were optimistic about his recovery. “We completely believed he would see the film,” says Haebler.

Sadly, that wasn’t meant to be. On March 10, 2017, Richard Wagamese passed away at the age of 61, only a few weeks before a rough cut was ready for viewing. “It was a body blow to the entire project and to every single person,” says Foon. “Richard, if he were alive, would be the voice of the film and would’ve been there every step of the way with us,” says Dolman.

During the editing process, it was decided the film needed more voice-over narration, and Foon seized the chance to “allow Richard to be the storyteller” by finding passages and phrases from the book to incorporate into the finished movie. “It was a way of further honouring Richard, and bringing him more into the film,” he says.

Wagamese’s voice also lives on in his hope that the film be seen by as many people as possible in order to raise awareness among non-Indigenous communities of the travesty of residential schools. The film’s April 13 Canadian release – from distributor Elevation Pictures – will help see to that. Screen Siren is also organizing an ambitious educational campaign, paired with a movie tie-in edition of the novel published by Douglas & McIntyre, which encourages teachers to take students to see the film and incorporate teaching aids created by Indigenous educators into their lesson plans.

It remains to be seen what impact the movie version of Indian Horse will have. But Eddy Robinson, an Indigenous education adviser, is already aware of the novel’s effects. The Anishinaabe-Mushkegowuk Cree speaker has run workshops in Ontario about residential schools and Truth and Reconciliation using the novel. “The book is the doorway to the discussion,” says Robinson. “What he’s created with Indian Horse is this path for our stories to be heard.”

The film has also had a profound effect on those all too familiar with this dark segment of Canada’s history – something the producers were made aware of when it screened at the 2017 Vancouver Film Festival. “During the Q&A, people would stand up without being called on and say, ‘This happened to me,’” says Foon. Indigenous people shared accounts of being whipped by nuns or having their mouths washed out. “These screenings have been like therapy sessions,” says Haebler. Williams understands the power those images can have for those who haven’t yet fully contended with what happened to them. “Some of them are just figuring out their healing journey, and when they see [the film] it helps them know how to overcome where they were stuck before,” she says.

Foon, who worked so closely with Wagamese and feels his loss deeply, says those screenings provided consolation for him, too. At some events, Indigenous elders perform ceremonies, during which they explain that, according to their beliefs, Richard Wagamese isn’t gone. “There was nothing hallucinatory about the idea that we felt he was close to us through this process, and that he was there with us,” says Foon.