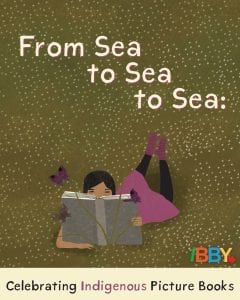 Since Dec. 3, the International Board on Books for Young People Canada (IBBY) has been tweeting a book a day from its new catalogue, From Sea to Sea to Sea: Celebrating Indigenous Picture Books, featuring 100 recommended children’s books by Indigenous authors, published between 1984 and 2017.

The catalogue was created as a response to the Truth and Reconciliation Commission’s Calls to Action, with IBBY Canada president Mary Beth Leatherdale co-chairing the project with author and educator Dr. Jenny Kay Dupuis (Nipissing First Nation). IBBY Canada hopes that libraries will add the books to their collections and that librarians, educators, and readers will share the list.

“The demand from young people for Indigenous literature is strong and growing,” Dupuis said in a press release. “Getting closer to understanding one’s self or others through storytelling means far more than just reading an Indigenous children’s picture book. It can build understanding and change lives.”

According to the catalogue introduction these “are the best books by Indigenous authors, many illustrated by Indigenous artists, published in Canada and currently in print. The titles reflect the diverse First Nations, Métis, and Inuit cultures, languages, perspectives, and experiences from sea to sea to sea. Attention was given to including picture books that promote and support Indigenous languages. All titles reflect authentic First Nations, Métis, and Inuit voices and offer insight into their distinct histories and current realities of these communities.”