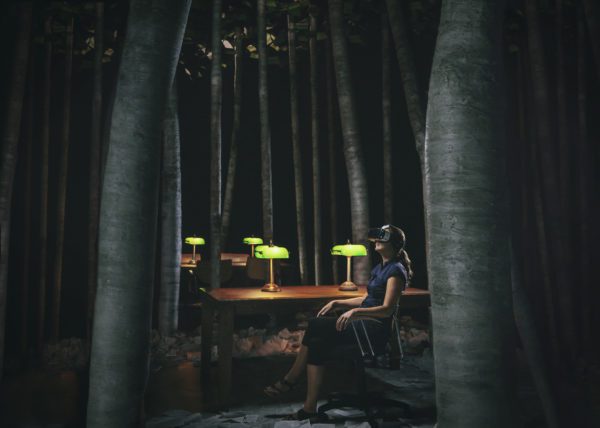 The Library at Night (Lighthouse Immersive)

An experiential art exhibit opening this month in Toronto brings books, those physical instruments for transportive imagination, into the virtual reality landscape.

The Library at Night opens March 10 and takes visitors on a tour of 10 libraries around the world.

The experience was originally developed by playwright and theatre artist Robert Lepage and his production company Ex Machina to mark the 10th anniversary of Montreal’s Grande Bibliothèque in 2015. The exhibition, which is based on Alberto Manguel’s book of the same name published in 2007 by Vintage Canada, has since toured the world and is finally being brought to the Canadian city where Manguel made his home for many years.

The exhibit opens in a well-designed room full of physical objects – including books and comfortable chairs – that is based on Manguel’s own library in France as described in the opening chapter of The Library at Night. Manguel’s voice plays on a speaker, talking about his collection and describing his relationship with books. From this antechamber, visitors move on to a room that looks like a forest, where the virtual reality headsets they put on take them to 10 different virtual library experiences.

“You have the kicks of a good virtual reality experience but with some interesting stuff to think about too, like what makes memory, what makes culture, what do we cling to, what survives after we’re gone,” he says.

The libraries featured in the exhibit are both real and imagined, from the fictional underwater library of Captain Nemo to the rebuilt National Library in Sarajevo. On occasion, imagined details can be spotted in real libraries, as with a human-sized edition of Audubon’s Birds of America visible in Ottawa’s normally formal Library of Parliament.

“There’s kind of an intelligent wit about everything,” Ouzounian says. “In the best sense of the word, it’s a clever exhibition. You can see minds at play deciding what you’re going to see and how they’re going to show it to you.”