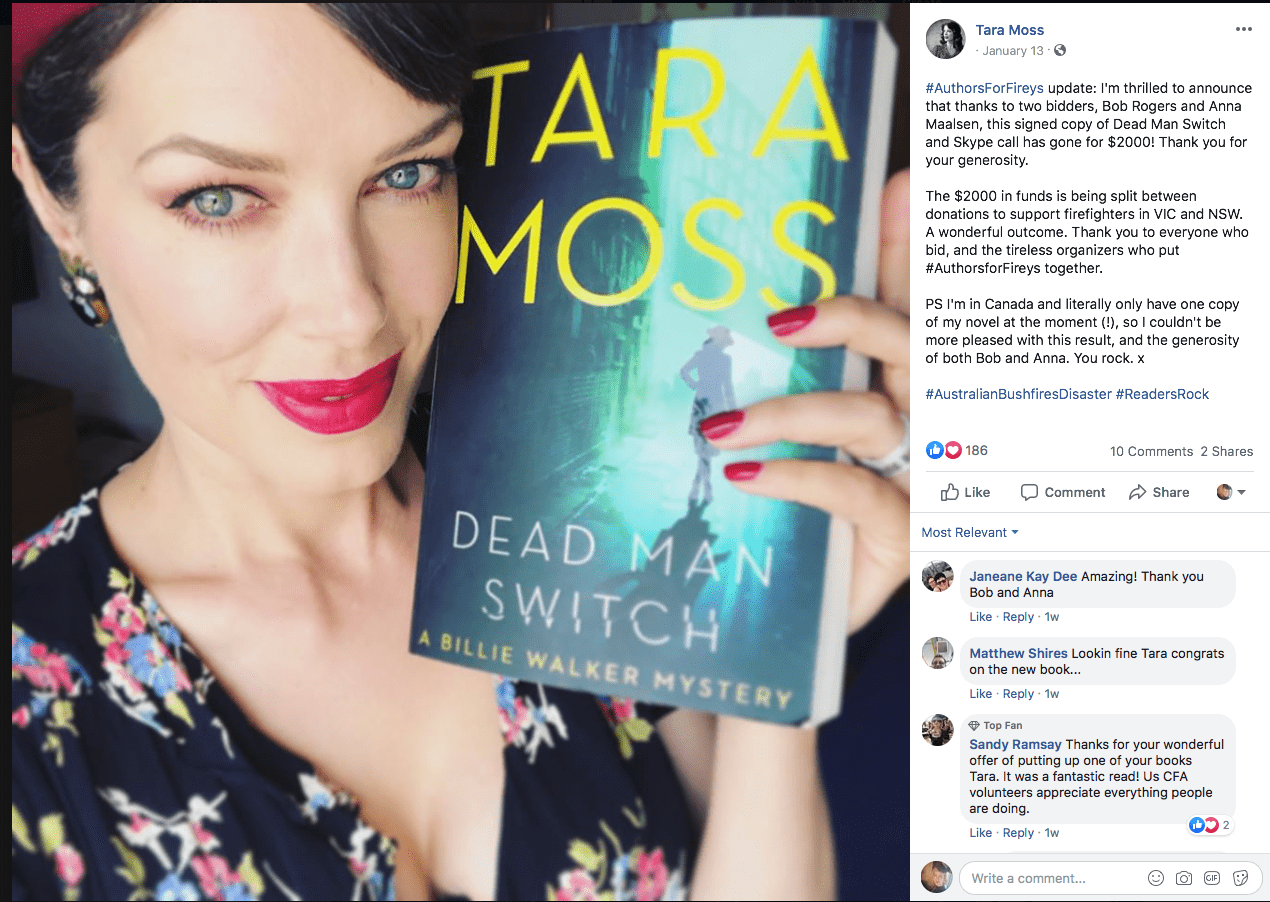 Watching a report on the fires in New South Wales, Australian YA novelists Nova Weetman and Emily Gale decided to organize a small fundraiser over Twitter for the volunteer firefighters (affectionately known as “fireys” in Australia), who tirelessly battled the blaze. “By the time we launched #AuthorsForFireys large parts of Victoria, South Australia, even Tasmania were burning,” says Weetman, who lives in Melbourne, Australia. The authors’ intention was to raise $13,000 to support the fireys. However, within hours of launching the hashtag, it was clear the auction had spread beyond their YA community to international authors.

“We ended up with 1,250 separate items, with everything from platypus tours in nearby rivers, to cups of tea with a former Australian prime minister,” says Weetman. Anyone who had a service, product, or quirky idea could take part in the fundraising campaign.

Canadian-born author Tara Moss came on board immediately. “Our home in the Blue Mountains, New South Wales, was almost lost,” says Moss. “It was only through the work of brave volunteer firefighters and a Canadian bomber that it was saved.” Moss auctioned off a signed copy of her novel, Dead Man Switch – a historical thriller set in 1946 with a fast-talking, champagne-swilling, staunchly feminist Nazi hunter – together with a Skype call, for $2,000. “It has been extraordinary to watch,” says Moss, who recently moved back to British Columbia with her Australian family.

In addition to the auction, Moss is also helping privately organize books for firefighters and families who have lost their homes and possessions. “These books won’t bring their home back, but will hopefully bring some comfort,” she says.

Other auction items included singer-songwriter Nick Cave’s suit, which raised $10,000, the chance to be a love-interest character in a YA novel, or to be killed off in a thriller. Cheryl Strayed auctioned leather-bound copies of Wild, and illustrator Elise Hurst offered original paintings from Neil Gaiman’s The Ocean At The End of The Lane.

A signed Canadian hardcover copy of Harry Potter & the Goblet of Fire fetched $1,650. Anna O’Grady worked as a bookseller in Canada for 17 years. She was invited to a private lunch with J.K. Rowling when the author read at Toronto’s International Festival of Authors in 2000. O’Grady since moved to Australia, where she is director of publicity at Simon & Schuster Australia. She says it wasn’t easy to part with the book, especially as her son is a huge Harry Potter fan. “It’s our family’s way of saying thank you to the incredible firefighters who have put their lives on the line,” O’Grady says.

Bidding ended Jan. 11, and Weetman says they’ve raised more than $500,000 towards fire stations and the Wildlife Information, Rescue and Education Service. “However, this auction was never going to be just about money,” explains Weetman. “It was about the community coming together at a time when we were all mourning our country.”

Weetman says over the past two weeks, new friendships have been made as bidders began tweeting photos of their winning books and artwork and other items such as beanies and crocheted oysters. “I think it says a lot about our community that we value people’s time and art,” says Weetman. “We can punch above our weight when we need to bring people together.”

The money raised will assist volunteer firefighters who have been injured, or lost income, help resource fire brigades and care for injured wildlife. And it will help the families of those fireys who have died. “We couldn’t help by fighting fires, but we could do this,” says Weetman.

The auction may be closed, but you can still donate to Authors for Fireys. Visit the website to learn more.

Amanda Lee is a freelance writer who has been published in This Magazine, Toronto Star, and Today’s Parent, among others. She is currently enrolled in an MFA in creative nonfiction at King’s College, where she’s writing a book about the opal mining town of Coober Pedy. Amanda grew up in Gippsland, Victoria, an area that was recently ravaged by bushfires.