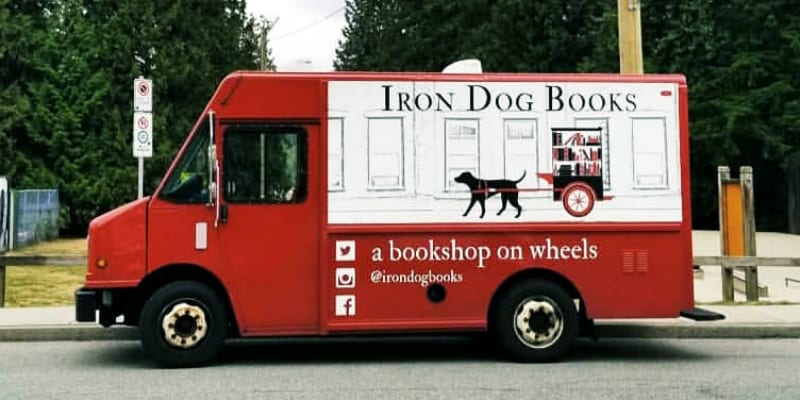 Hilary Atleo has grown accustomed to people squealing with delight when they see her B.C. bookmobile Iron Dog Books. “This is magical!” they tell her. “It looks like it drove out of Harry Potter!”

After two years of driving the truck, mostly north of Vancouver between Chiliwack and Squamish with a stop at Simon Fraser University in Burnaby every Wednesday, Atleo thinks she knows why her 80-square-foot bookstore on wheels conjures wizardly comparisons. “They’re saying, ‘This is so magical to me that I feel like I belong in a fantasy story.’”

Atleo hopes to bottle some of that magic with the opening of a new brick-and-mortar location. Opening Dec. 6 in East Vancouver, the store will stock the kinds of frontlist bestsellers that people balk at on the truck, which sells primarily backlist, secondhand books, and remainders.

“People really struggle on the street with the price of a full-priced hardcover,” she says. “People often say to me, ‘That is the same price that I would pay at Chapters.’ I’m like, well, that is because I am also a bookstore.”

Beyond the bestsellers, the 1000-square-foot store will allow Iron Dog Books to stock more of the titles that fit the store’s mandate to have a great book for everyone. That includes the books that her family enjoys – both Atleo and her husband are Indigenous, and they are passionate about work by Indigenous authors, including political and social-studies titles. They also love sci-fi and fantasy and are well-versed in graphic novels that are great for early readers, vetted by the couple’s seven- and five-year-olds. 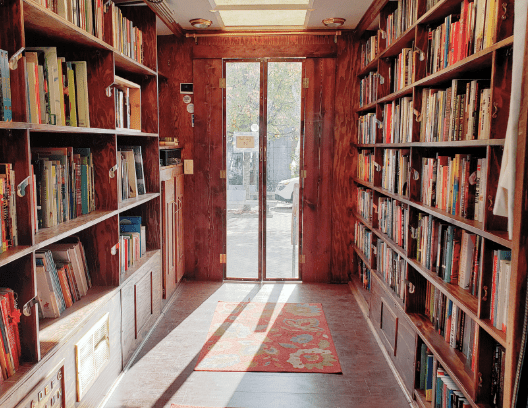 When in doubt, she goes on instinct. “I hold each book in my hands and I say to myself, ‘Am I still going to want this book in two years?’” she laughs. “And if the book is good enough, if I think it has that enduring quality, then I put it in the truck.”

What people are drawn to isn’t always intuitive. At the Vancouver International Jazz Fest, for example, their bestselling book wasn’t about jazz; it was Tupac Shakur’s poetry collection The Rose That Grew From Concrete.

Of course, not everything sells well. “The section that I was surprised doesn’t work in the truck is any sort of health or self-help,” she says. “I carried it with us for a whole year saying it’s going to work, and it is not a truck-type [category].

“I think that books like health and self-help are like grocery shopping. You go with a list and you think these are all the things I need. I think the truck, as an experience, stimulates a different part of your interactions. You think, ‘I want to find something that I want because it’s fun and interesting. I want to be surprised.’”

Expanding into a brick-and-mortar space, especially in a real-estate market as expensive as Vancouver’s, has gotten Atleo thinking that the model for cultural retail spaces is broken. Her property taxes, she notes, are nearly half her total rent. “It’s like us versus Dollarama,” she says. “We are not the same thing and we shouldn’t be treated like the same thing.”

Atleo believes Canadian cultural retailers would benefit from the same support network that allows creators to flourish. “[Grants] are funding producers to create things that are then sold on the internet and in no way help our local community or economy,” she says. “The truth is that booksellers on the whole are doing extremely well. I think that public policy needs to look at the fact that some creative industries, like bookstores and record shops, are valuable beyond just being considered as base retail.”