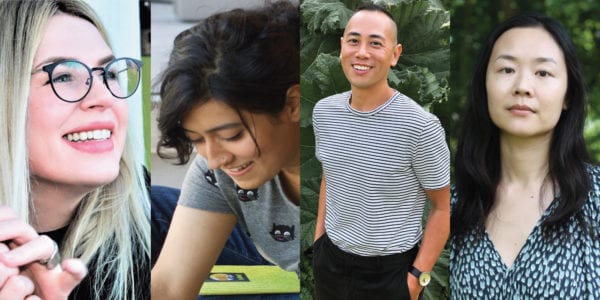 “Maybe this was phase one of diversity publishing, stories about QT BIPOC trauma,” she mused. “The way that readers and the industry seem to consume and understand work by people of colour is through the lens of oppression.”

This guide celebrates a dawning phase two, presenting new and upcoming releases by a diverse group of authors that showcase joy and complexity across genres.

As we enter the sun-drenched days of summer, we invite you to unfurl a blanket outdoors and grab one of these books. They aren’t all light reads, but together they show that stories from equity-seeking communities are about so much more than pain and trauma. These books are about adventure, romance, family, murder, the apocalypse, the universe, the garden, the home – in other words, diversity publishing can be about absolutely anything.

In this memoir of growing up in Nova Scotia, the former parliamentary poet laureate paints vivid scenes of his early life: his family’s urban home, his parents’ split, his mother’s rural background. Underlying the story of his complicated family life is his unique Africadian mixed heritage, the stress of racism, and secrets that, when revealed, explain everything. –Cassandra Drudi

Nina, the protagonist in Bhat’s coming-of-age novel, is a curious and clever teenager in 1990s Halifax with a serious crush on her English teacher and a best friend who’s growing distant. She stays quiet as her mother sets her up with local Indian boys who don’t get her pop-culture references and as her dad takes to praying in Hindi outside her bedroom. In chronicling Nina’s life from high-school student to high-school teacher, Bhat examines how the things left unsaid affect us in a novel that is darkly funny and deeply moving. –CD

Everyone in This Room Will Someday Be Dead
Emily Austin
Atria Books/Simon & Schuster Canada, July

A comic novel about a lesbian with morbid anxiety may not sound like a safe bet for a first book, but Austin wrings plenty of hilarity from existential agony in this #OwnVoices story. When Gilda finds herself working admin at a Catholic church, she strikes up a correspondence online with a friend of her recently deceased predecessor, and soon finds herself pulled into the late receptionist’s suspicious death. –Ryan Porter

It’s hard out there for a cyclops in Dhaliwal’s graphic novel Cyclopedia Exotica. The cartoonist’s cast of lovable, relatable cyclops are misunderstood, stereotyped, and fetishized in a jocular yet pointed satire of the microaggressions minority communities face. –RP

As an agrologist (a scientist who specializes in soil), Premee Mohamed works on environmental policy for the Albertan government. Her belief in positive ecological change is present in her upcoming novel, set in the Indo Canadian’s home province in the wake of climate disaster. A young woman who is given an opportunity to escape to safer territory struggles with leaving her mother and her community behind. The novel confronts a bleak future in a style described as “hopepunk.” –RP

In McWatt’s latest novel, four characters meet at a wedding in Punjab, India, in 2009. Reema, a childhood friend of the bride, has plans to visit her mother’s family after the celebration, in part to grapple with her complicated relationship to her mixed Indian heritage. She heads instead to the Himalayas with her unlikely travelling companions. On their journey, the intergenerational and intercultural group grapple with the stuff of life: identity, love, and secrets. –CD

This collection shows Newfoundland contains multitudes, as writers observe the province through the lens of their identities. From NunatuKavut Inuk spoken-word artist and professor Julie Bull’s poem weaving together the strands of their identity to queer disabled playwright Paul David Power’s meditation on the magnetic lure of home, Land of Many Shores debunks the myth of a homogenous Newfoundland. –RP

How We Do Family: From Adoption to Trans Pregnancy, What We Learned about Love and LGBTQ Parenthood
Trystan Reese
The Experiment/Canadian Manda Group, available now

Trans men can feel left without a road map to parenthood, which is part of the reason why Reese wanted to share his path to pregnancy. Reese is candid about his personal experiences, such as going off testosterone and restoring his menstrual cycle, and how health-care providers are not always well versed in these topics. Today, his family of five with his partner Biff includes their biological son, Leo, and Biff’s nephew, Lucas, and niece, Hailey, proving that when it comes to creating a family, the possibilities are infinite. –RP

At 69, the playwright and member of the Order of Canada reflects on his own life in his first memoir. Despite experiencing tragedy, Highway is guided by his late brother René’s final words before his death in 1990 of an AIDS-related illness: “Don’t mourn me, be joyful.” –RP

The authors of this anthology of fiction, poetry, and creative nonfiction (the fourth in the series and first to be published by Dundurn) undertook the project as part of a community arts program for people with mental health and addiction issues. By sharing their truths in this polished, triumphant collection, they prove their moments of darkness don’t define them. –RP

Li examines sci-fi from the late 1970s to the mid 1980s through close readings of works by well-known writers from the period, such as Zheng Wenguang and Ye Yonglie, alongside literary analysis informed by her knowledge of the genre, Chinese literary history, and media studies. –CD

In her second collection, the Griffin Prize winner examines the everyday and the deeply personal. Howard, who is of settler and Anishinaabe heritage, draws on Anishinaabe cosmological knowledge and Western astronomy, finding moments of lightness in tragedy and deciding again and again to “reforge” herself and carry on. –CD

In this collection of poems, inspired by the late Canadian poet John Thompson and the Tantramar Marsh setting of Stilt Jack, Japanese-Canadian poet Irie charts routes of discovery through nature and the mind. The collection features lyrical poems in which nature appears as both sanctuary and purgatory. –CD

A coming-of-age drama set on the high seas, Tan’s second novel follows Sebastien, a young man of Singaporean and Greek descent who goes undercover aboard a luxury ocean liner to stalk the commanding officer, the father he never knew. Sexual and cultural identities are explored in a novel that doesn’t close its eyes to the darkness, even as it celebrates a world that is vast and filled with adventure. –RP

The protagonist in Fung’s debut novel is from a Chinese-Canadian “astronaut” family – her father remains in Hong Kong to work when she immigrates to Vancouver as a child with her mother and grandparents. After his death, she seeks answers to unresolved questions – from her memories, her mother, and her grandmother – in a novel that features moments of joy and sorrow. –CD

Update, June 29: This story has been updated from the July/August 2021 print issue to clarify that Inkwell Workshops is a community arts program and does not run its writing program as a treatment for people with mental health and addiction issues.