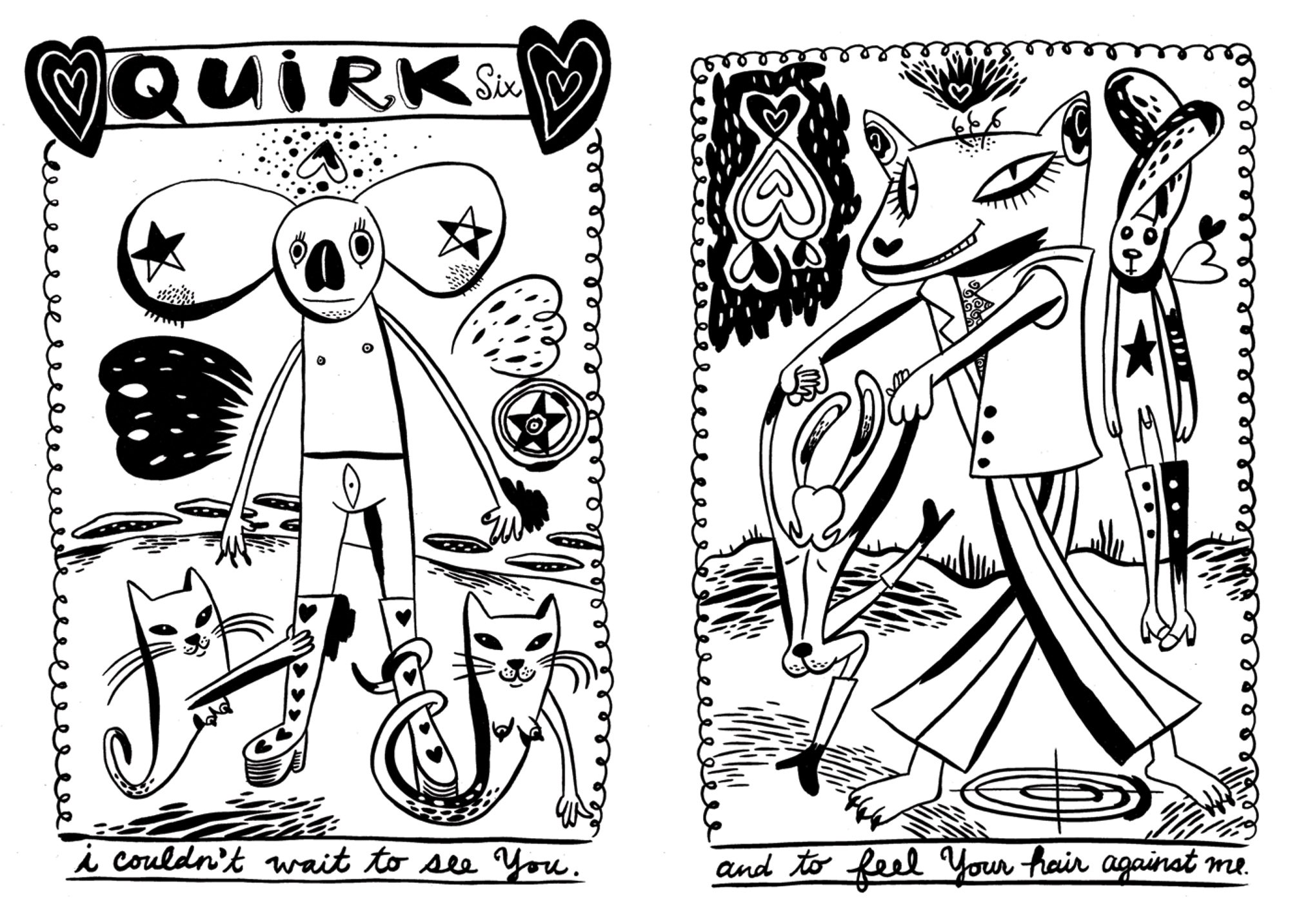 “There are two posters of mine in the bathroom!” Fiona Smyth joyously exclaims as she sits down at Toronto’s Gladstone Hotel.

For 35 years, Smyth has immersed herself in the city’s artistic community creating comics, paintings, and books. While generations of Torontonians are familiar with Smyth’s work – or at least her event posters and the iconic signage at Sneaky Dee’s bar – she hasn’t achieved household-name status like some of her contemporaries.

When Smyth began drawing comics as a student at the Ontario College of Art (now OCAD University) in the mid-1980s, it was “a very small scene, mostly male-dominated, of course, especially in Toronto with the holy triumvirate of Chester [Brown], Joe [Matt], and Seth.” From the beginning, Smyth balanced her comics with her work as a painter. “Even my earliest shows, I would make zines to sell. So I would have an art show but make a mini-zine to sell, because people might not be able to afford a painting, but they could afford a zine.”

Smyth’s early work was overtly sexual, dealing with themes like female sexuality, body image, and dreams. Though Smyth explicitly identifies as feminist, her art was sometimes labelled anti-feminist for its sexual content. “Being a woman artist making sexual work and sexual comics, that could be an issue,” she says. She felt like an outlier in both her subject matter and visual style. “I was making these artsy comics, not autobio comics.” Looking back, Smyth is surprised by her own boldness. “I think my work is still in your face, but it’s much more on the horror [side].”

This spring, Koyama Press is launching a retrospective collection of Smyth’s work from 1985 to 2016. Somnambulance brings together unpublished, out-of-print, and new art, as well as self-published zines, anthology stories, and comic strips.

The collection includes collaborations with many notable names in Canadian and American comics, including Dame Darcy, Ellen Forney, Maurice Vellekoop, and Dave Lapp – artists Smyth met in Toronto, on visits to New York, or through publishers like Drawn & Quarterly, Fantagraphics, and the now-defunct Vortex Comics. Themes of sleeping, dreams, and the recurrent motif of the “sleeping woman” – Smyth’s symbol for a disconnect between the female body and the mind – recur throughout the book.

In the 1990s, Smyth began drawing regular comic strips for Vice magazine and the free music newspaper Exclaim!. But when both publications cancelled her strips and other work was slow to come in, Smyth went through some lean years. The late 1990s and early 2000s saw her painting glow-in-the-dark mini-golf props at a warehouse in the suburbs and working in the paint department at Home Depot.

Things picked up in 2006 when Smyth began teaching courses in comics and illustration at OCAD University. In 2011, she released a middle-grade sci-fi graphic novel, The Never Weres (Annick Press), and in 2012 illustrated the critically acclaimed picture book What Makes a Baby (Seven Stories Press), written by Cory Silverberg. The two collaborated on the successful 2015 follow-up, Sex Is a Funny Word, with a third title currently in the works.

It was also in the past decade that Smyth met publisher Annie Koyama, who brought Somnambulance to life. Koyama had been familiar with Smyth’s murals since the 1980s but didn’t get to know the artist until much more recently, when they began running into each other at Toronto zine and comic festivals. “I noticed that she, like myself, would buy zines from everybody,” Koyama says. “I saw her walking around Canzine, and I realized that none of the young zine-makers had a clue as to who she was and how important she was, and that cemented for me that she needed to have something of her own out.”

Smyth remains active in the indie zine and comics arena and is hopeful about the diversity of voices that have emerged. “We’re all about authorship and creating your own platform and getting your work out there and not waiting for an art director or publisher or curator to discover you,” she says. “I totally identify with folks who are creating works today, more so than I did with my peers back in the day.”