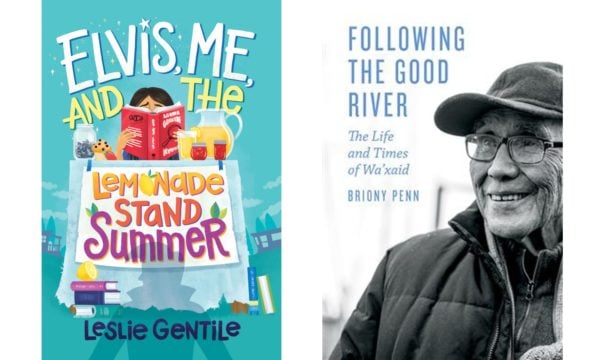 The winners of the 2021 Victoria Book Prizes have been announced.

Leslie Gentile won the $5,000 City of Victoria Children’s Book Prize for her book Elvis, Me, and the Lemonade Stand Summer (Cormorant Books, Dancing Cat Books). In their citation, the jury noted Gentile’s “first-rate storytelling, with a surprising plot twist, a twist on the twist, and a believable happy ending.”

Briony Penn with Cecil Paul, also known by his Xenaksiala name, Wa’xaid, won the $5,000 City of Victoria Butler Book Prize for Following the Good River: The Life and Times of Wa’xaid (Rocky Mountain Books). In their citation, the jurors called the book “a monumental collaboration between a legendary Indigenous activist and the journalist who has followed him for decades.” Wa’xaid died at the age of 90 in December 2020.

The winners were announced at a virtual gala on Oct. 3.