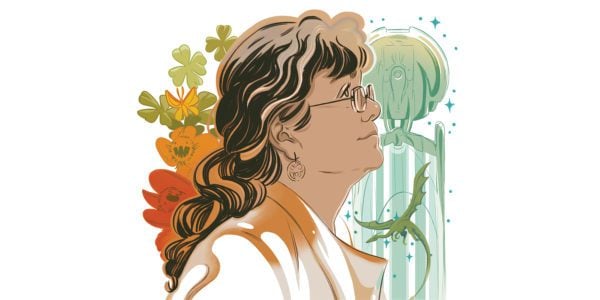 Some people turn to sci-fi as a way to escape the real world. Lorna Toolis, former head of the Toronto Public Library’s Merril Collection of Science Fiction, Speculation, and Fantasy discovered the genre while fleeing from Canada’s national sport.

As a kid growing up in 1950s Winnipeg, Toolis, who died in August, discovered a stash of books in her grandmother’s closet while sneaking away from the ritual of watching Hockey Night in Canada with her family. She started reading her grandmother’s copy of The Stars Are Ours!, a 1954 novel by American writer Andre Norton, which depicts humans attempting to escape a ravaged Earth, and was hooked.

That interstellar voyage set the trajectory of Toolis’s career. While working on her master’s degree in library science at the University of Alberta, the hardcore Trekkie joined a local Edmonton sci-fi club and later became a fervent player of the role-playing game Call of Cthulhu, which is how she met her husband, Michael Skeet. (Toolis’s own game lasted for more than 25 years, until her death.)

Toolis joined the Spaced Out Library (as the Merril Collection was known in its early days) in 1996, having been named head of the department after a nationwide search. The original collection of 5,000 books was donated to the TPL in 1970 by beloved American author and editor Judith Merril, who moved to Canada as a conscientious objector against the Vietnam War.

Annette Mocek, who retired as a services specialist for the collection this fall, spent her entire career working alongside Toolis. In 1988, when 26-year-old Mocek joined the team, Toolis was the only other full-time librarian.

“We kept the place open six days a week, and at the end of the day, we shelved the books ourselves,” Mocek says. All the book descriptions were written out by hand on paper, with the requisite catalogues then transcribed onto cards by a typist. “Every book was a lot of labour, and if there was a typo, you’d have to start over.”

Mocek remembers her long-time colleague, who retired in 2017, as a lovely caregiver and “the sort of person who created a community around herself.” Toolis’s outreach included not just library patrons but the broader science-fiction community, in part connecting them through Sol Rising, a biannual Friends of Merril Collection zine that ran for more than 30 years.

In the early days, members of the local Cecil St. writing workshop, which was founded in 1986 shortly after Merril’s stint as writer-in-residence at the Spaced Out Library, arranged to leave multiple copies of their works-in-progress at the library for other members to pick up and critique at their next meetings. Many members of the workshop, including Skeet, Cory Doctorow, Karl Schroeder, David Nickle, and Madeline Ashby, went on to have their published works represented in the collection.

“When I joined, we were like a meeting post,” says Mocek. “People would drop by to see what was going on, or to drop off a manuscript or pick up one for their writing group. They’d come around when we bought books and lean over the counter to see what we had.”

In the early days, when the Spaced Out Library was much smaller, patrons could easily browse through its shelves. But as Mocek points out, a sunny, comfy place for reading is a terrible location to store valuable light-sensitive paper, such as the collection’s oldest item, The Life and Adventures of Peter Wilkins, a Cornish Man, a sci-fi novel by Robert Paltock published in 1751.

Today, the Merril, which moved to the TPL’s Lillian H. Smith branch in 1995, has grown to more than 80,000 publications, games, and other materials, which are held in temperature- and humidity-controlled stacks, and is now considered to be one of the largest public research collections of its kind.

“People can certainly come and pull up a chair and enjoy the material all day long if they want to. It’s just a different kind of place than it was before,” says Mocek.

During their tenure, Toolis and Mocek oversaw many changes, not only to the collection’s incredible growth and its location but to the library system as a whole. When asked about the most significant change during their time, Mocek doesn’t hesitate: the introduction of computers and the subsequent farewell to handwritten documentation.

In 2020, the collection’s caretakers had planned to celebrate its 50th anniversary with an exhibition at the Toronto Reference Library. Spaced Out: 50 Years of the Merril Collection, which showcases some of its most unusual holdings, including a copy of “Eight Rules of Writing,” a limited-edition collaborative work between Neil Gaiman and Toronto printmaker George Walker. The show was postponed due to COVID-19 restrictions and is now running at the downtown branch until Jan. 2.

Sephora Henderson, who took over as Merril’s collection head in 2017, is hoping the show will introduce this otherworldly resource to sci-fi fans who may not be aware of its existence.

“Promotion for the collection is always at the forefront of our thinking,” says Henderson. “But even for those who do know that it’s here, this show is a celebration of its beginnings and how far we’ve come, and an idea of where we’re heading.”

Correction, November 19: This story has been updated from the version that ran in the December issue to include Toolis’s correct hometown and preferred tabletop RPG, which are Winnipeg and Call of Cthulhu, respectively. It has also been updated to note that Toolis did not die after a long illness, and that the members of the Cecil St. writing workshop noted in the article, other than Skeet – and Karl Schroeder (added) – were not founding members.