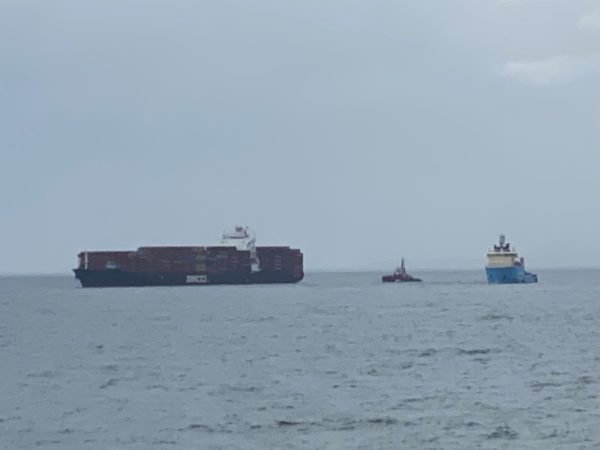 When containers aboard the MV Zim Kingston, a cargo boat from China, caught fire off the coast of Victoria in late October, Andrew Wooldridge, publisher of Orca Book Publishers, could see the plume of smoke from his home. But he didn’t expect that among the ship’s cargo was an order of reprints Orca had ordered from its printer in China.

Paperbacks of five titles – 15,000 books – from the Orca Footprints series were on board the ship. At this point, it’s not clear where the books are: they could have been damaged during the fire or firefighting, they could be intact, or they could be inside one of the 109 containers that fell off the boat, all but four of which remain unaccounted for, according to the Canadian Coast Guard.

Orca ordered a new reprint immediately but the new books are now not expected until the new year.

“We’ll either end up with just enough, late, or twice what we want,” Wooldridge says.

Wooldridge says the loss of the books to the MV Zim Kingston highlights the issues Canadian publishers are facing, from supply chain concerns about longer lead times for reprints and limited printing capacity to concerns about the environmental impact of printing books overseas.

“It brought everything together for me,” he says.

Thirty per cent of Orca’s books have been printed overseas in the last few years, but for political, social, and environmental reasons, the publisher made the decision earlier this year to move as much work as possible to domestic printers.

“All of our new spring titles – with the exception of board books, which can’t be printed in Canada – are being printed in Canada,” Wooldridge says. “We’re managing our forward-looking printing process very well; the issue that’s showing up for a lot of people is reprints with quick turnarounds, which are impossible to manage.”

Wooldridge says he would much rather print exclusively in Canada, but with concerns about limited paper supply and a lack of printing capacity here, there doesn’t seem to be a clear solution.

The books lost to the MV Zim Kingston’s failed journey were reprints: two new-format paperbacks and three paperback reprints, all of which were ordered four to five months ago. Wooldridge says the loss would have been worse if the books were copies of brand-new titles slated to hit bookstore shelves before the holidays. He is looking at the incident as a chance to rethink the publisher’s plans – and the industry’s practices – going forward.

“It’s another one of those opportunities to take a look and reconsider how we do things,” Wooldridge says. “That’s my glass-half-full take.”

Orca expects it could take up to a month before crews have emptied the MV Zim Kingston and determined which containers are still on board and what goods have been damaged.