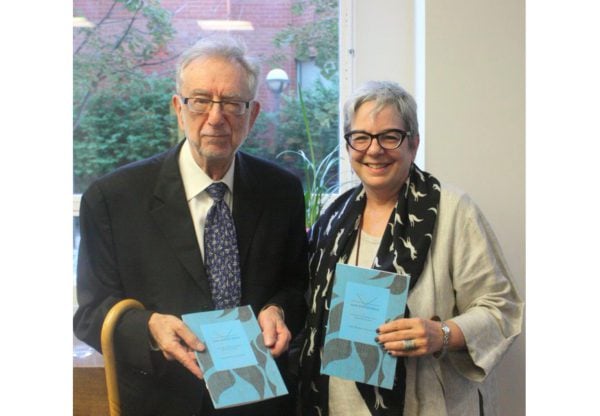 But for a bout with mono, Malcolm Lester might never have become a publisher.

The former owner and president of Lester & Orpen Dennys, one of the most significant Canadian independent houses in the 1980s, originally planned to be a rabbi, going so far as to enrol in rabbinical school at Hebrew Union College in Cincinnati, Ohio. But he took a break when he fell ill with mononucleosis, a period that allowed him to reflect on his calling. During his time away from rabbinical school, he realized what he enjoyed above all was books – an epiphany that sent him down the road to becoming one of the country’s most beloved and important publishing figures.

Not that he ever entirely left his religious community behind. “He grew up at Holy Blossom and had all of his childhood and teen years there,” says Rabbi Yael Splansky, the senior rabbi at the temple, which is the oldest in Toronto. “He was away for decades and only at the end of his life did he rejoin the congregation.”

In the interim, Lester, who died on April 1 after a lengthy battle with Parkinson’s disease, embarked on one of the most remarkable publishing careers in CanLit’s developmental period. He spent time working for Coles, as general manager of Coles Publishing, and served as managing editor for the educational publisher Holt, Rinehart & Winston. Lester eventually partnered with Eve Orpen, a former book marketing professional at General Publishing and Collier-Macmillan, to form his own company, Lester & Orpen, in 1973. Before Orpen died of cancer in 1978, she suggested Lester approach a talented English transplant named Louise Dennys as a new partner for the business. Renamed Lester & Orpen Dennys, the house would go on to publish some of the most important work of the 1980s in Canada.

“We were on this wonderful ride at a time when Canadian publishing as a whole was finding new feet,” says Dennys.

For Lester, who also served as president of the Association of Canadian Publishers in the early to mid ’80s, the search for new feet took a bifurcated path. As an advocate for Canadian writing and writers (besides Dennys, Lester’s only other employee in the early days was a then-unknown future novelist named Barbara Gowdy), Lester could be passionately nationalistic, championing a domestic industry that at the time was struggling to find an audience. He wanted Canadians to read writing by their compatriots and felt that Canadian literature should be able to compete with the best of the international literatures of the day.

With Dennys’s enthusiastic participation, L&OD also embarked on a project that was somewhat novel at the time: convincing international publishers to sell Canadian publication rights to a domestic house rather than retaining them for distribution by branch plants of multinationals. The approach paid off. A quick scan of L&OD’s list reads like a who’s who of international heavyweights: Italo Calvino, Joan Didion, Penelope Lively, Graham Greene, Isabel Allende, Kazuo Ishiguro, P.D. James, William Trevor.

“Joining that list with Lester & Orpen Dennys was like stepping into a world that hadn’t existed up until then in Toronto,” says Barry Callaghan, whose collection Black Queen Stories appeared with the publisher. “They were a light unto my own nation.”

“He forged great changes to this industry for which I think he was never acknowledged enough,” says Dennys. “It’s a kind of niche place in some ways, and yet it informs all that we do as publishers, editors, writers. And it informs how the country operates.”

Among the most significant Canadian books to appear from L&OD – or anywhere, for that matter – is the quintessential 1982 volume None Is Too Many: Canada and the Jews of Europe 1933–1948, by Irving Abella and Harold Troper. The book, about Canada’s refusal to admit Jewish refugees fleeing Nazi persecution during the Second World War, is one of the most important documents about the history of Jewish treatment by the Canadian government ever produced, and it remains in print to this day. Equally significant was the publication of Joy Kogawa’s 1981 novel Obasan, about the internment of Japanese-Canadians during the same period.

“To us, [L&OD was] the publishing house of record and it was such an honour to have None Is Too Many published by you,” says Rosalie Abella, wife of Irving, in a statement included in Rabbi Splansky’s eulogy for Lester at a gravesite service on Monday. “Your instincts proved to be not only right at the time, but resulted in the book being an ongoing conscience in Canada’s national fibre.”

While Lester was adamant about the importance of publishing and recognizing Canadian writers, the output from L&OD clearly illustrates the way in which that passion remained clear-eyed about the country’s grievous historical errors. “It wasn’t an easy kind of nationalism; it was a sense that understanding stories could change our ways of living,” says Dennys.

That sense of the importance of stories was not confined to literature for adults. L&OD had already made a mark in children’s publishing with Janet Lunn’s groundbreaking 1981 novel The Root Cellar, but Lester wanted to expand the reach of the books for young people. To do so, he recruited Kathy Lowinger, then the executive director of the Canadian Children’s Book Centre. “Despite the fact that I knew a lot about children’s books, and a lot about Canadian children’s books, I knew nothing about publishing,” Lowinger says. “I didn’t know how to get an ISBN, I didn’t know what an ISBN actually was.”

The gamble paid off: among numerous books Lowinger helped shepherd into print was Barbara Nichols’s classic Beethoven Lives Upstairs. Later, as part of Lester Publishing, she brought out Linda Granfield’s In Flander’s Fields: The Story of the Poem by John McCrae, The Story of Canada by Janet Lunn and Christopher Moore, and work by the children’s author Barbara Smucker. “Part of it was their faith in me,” Lowinger says. “Both Louise and Malcolm had this faith in people.”

It was a faith that, ironically, would help lead to the demise of L&OD as an independent entity. After the firm started to run into financial difficulties, Lester sold the company in 1988 to Christopher Ondaatje, the brother of Michael (whose short fiction anthology, From Ink Lake, came out with L&OD in 1990). That marriage, doomed from the start, ended when Ondaatje sold the publisher to a holding company, Hees, which dumped it unceremoniously in 1991.

Anna Porter, owner of Key Porter Books, came to Lester’s rescue, purchasing the L&OD backlist and offering Lester his own imprint. Lester went on to establish Lester Publishing as a joint venture with Key Porter Books, and subsequently Malcolm Lester Books. “Malcolm was always really engaged with his books and his authors, in a quiet, almost rabbinical way,” says Porter. “He could argue the case of any one of his books with such amazing aplomb for a quiet guy.”

Lester’s quietness and his reluctance to promote himself or his own achievements arguably led to a popular underestimation of his importance as a cultural figure, especially in the shadow of a flamboyant contemporary like Jack McClelland. Despite his many significant contributions to Canadian literature and publishing, he was never invested in the Order of Canada, an oversight many people find unforgivable and inexplicable. “It was something I discussed with him a couple of times,” says Porter. “And if I can recollect his words exactly, he said, ‘Don’t be ridiculous.’”

The modesty was not false: though friends and colleagues remember Lester as a shy man, he was never unaware of his own accomplishments. He simply never seemed to crave the public recognition that others chased. That said, the inability or unwillingness of the Canadian establishment to acknowledge his extensive influence on the national literary landscape remains a bizarre oversight. “He had a real sense of his own talent. I don’t think he ever doubted it,” Lowinger says. “The people who worked with him all knew it about him. He certainly had the admiration and respect of the people who worked with him.”

This is the case for Natalie Fingerhut, acquisitions editor at the New Jewish Press, the final publishing venture that Lester embarked on as a way of spotlighting the experiences and stories of the Jewish community in Canada. “For his generation, he was a pillar of Canadian Jewish literature publishing at both L&OD and at New Jewish Press,” Fingerhut says.

One of Lester’s final publishing projects was the production of a new edition of the Siddur Pirchei Kodesh, the Jewish Prayer Book, for Holy Blossom Temple. The lavish volume, edited by Rabbi Splansky, includes bilingual text in both English and Hebrew, along with explanatory footnotes, a glossary of names and terms, and illuminated text and illustrations. “He really was able to take up these Jewish themes again – theology and Hebrew poetry and a look at translations of the Psalms,” says Rabbi Splansky. “It was more than just another book.” It was, in fact, a homecoming of sorts for the publishing master who once thought of becoming a rabbi.

Though he spent the last decade of his life suffering Parkinson’s, a disease that eventually took away his mobility and forced him into a long-term care home during Covid, he never lost his piercing intelligence. “His mind was as vital and sharp to the end,” says Dennys. “He was still telling jokes on the phone. One of the things that helped our relationship is I had a terrible memory for jokes, so several times I’d be laughing uproariously.”

Lester’s humour was central to his personality. “He was hilarious. There were times when we laughed so hard at Lester & Orpen Dennys that we literally fell out of chairs,” Lowinger says. “He could tell a joke like nobody else. But he also saw the ridiculous in things.”

He was a true polymath, a lover of books and jazz and jokes and baseball and movies, as well as a member of a Spinoza discussion group. “I often heard Malcolm Lester referred to as a mensch: a man of honour,” says Fingerhut.

It’s a word that comes up repeatedly, and with good reason. Ultimately, it would be impossible to publish the kinds of things Lester did, in the way he did, without this essential quality. “We both loved and admired Malcolm deeply and appreciated his advice and guidance,” says Rosalie Abella. “He was a great editor who seemed to have an innate sense of what words to use and where. And he had a beautiful soul. His legacy is enduring.”

Abella is by no means alone in her estimation. “I think that for many of us, our days at Lester & Orpen Dennys were really among the happiest of our careers,” Lowinger says. “It truly was a golden period. We were young, we were smart, we worked like dogs. And we did good stuff.”