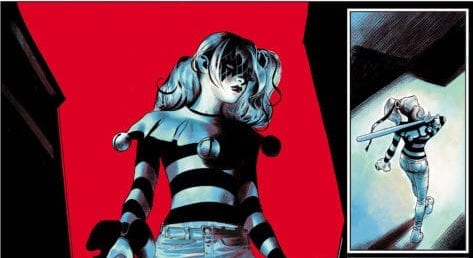 In Harley Quinn, Breaking Glass, Toronto-born, California-based writer Mariko Tamaki joins British illustrator Steve Pugh in reimagining the antihero’s teenage years. Harleen Quinzel heads to Gotham and ends up finding a family within a community of drag queens, while also coming under the influence of student activist Ivy (as in Poison Ivy) and a shadowy figure who calls himself The Joker. This is the latest superhero comic for Tamaki, who has recently been writing stories for DC (Supergirl: Being Super) and Marvel (She-Hulk), as well as releasing her own personal, often award-winning YA graphic novels (including Skim, This One Summer, and the upcoming Laura Dean Keeps Breaking Up With Me). Q&Q spoke with Tamaki about comics, drag queens, and what makes the character of Harley Quinn so appealing.

You are enjoying success with literary YA graphic novels and at the same time with writing Marvel and DC superhero comics. How do these genres co-exist for you? In what ways do they offer you something different creatively?
In many ways it’s the same. For me both are about story and character, when I think about writing comics for myself and for DC characters, I start from the same place, which is a sort of amorphous, “who is this and what is this story about?” place.  There’s a kind of puzzle solving that comes with writing mainstream characters like Harley Quinn though because you’re working with a character that already exists, that has a history, and in some ways you’re responding to that. I’m such a pop-culture nerd, I really love that challenge. 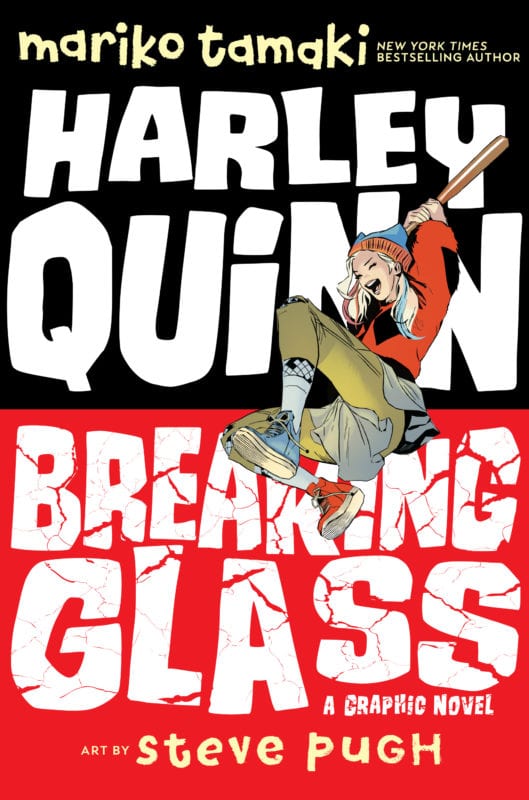 What is your history with superhero comics? Are there certain characters you’ve been drawn to?
I’ve been writing superhero characters for a while now. I started with Laura Croft, Tomb Raider, and Casey and April from Teenage Mutant Ninja Turtles. I’ve worked on X-23 and She-Hulk for Marvel, and Supergirl and now Harley Quinn for DC. I’m definitely drawn to complex heroes. Or to creating superhero stories that are very human. I always want to know what happens after someone saves the day. Like, do they go home and watch reality TV? What do they eat?

What new and different things do you want to offer fans of the superhero characters you’re portraying, and what do you want to offer newcomers, including fans of your previous work?
I don’t know if I’m offering anything new per se. I think as soon as you say something is new, someone else can point to their work and show you whatever you think you’re doing has been done very well before. I will say I take a very personal approach to these comics, which is my approach to all the stories I write. So, if you like the work I do outside of trade comics, you’ll like this. This book is full of many of the things I love, including drag queens, and so I hope other people enjoy that part of the story.

What aspects of Harley Quinn were you interested in exploring/re-imagining?
The thing I’ve always liked about Harley Quinn is that, in my mind, she is not a simple “hero.” She’s someone who could chose to make her part of the world a better place, or  sit back and watch it descend into chaos – or be that chaos. I really got into that idea of choice, of responding to the world instead of acting out of a sense of duty.  To me that idea connects really well to the themes of YA, that decision of how you’re going to connect with the world, be a part of it. 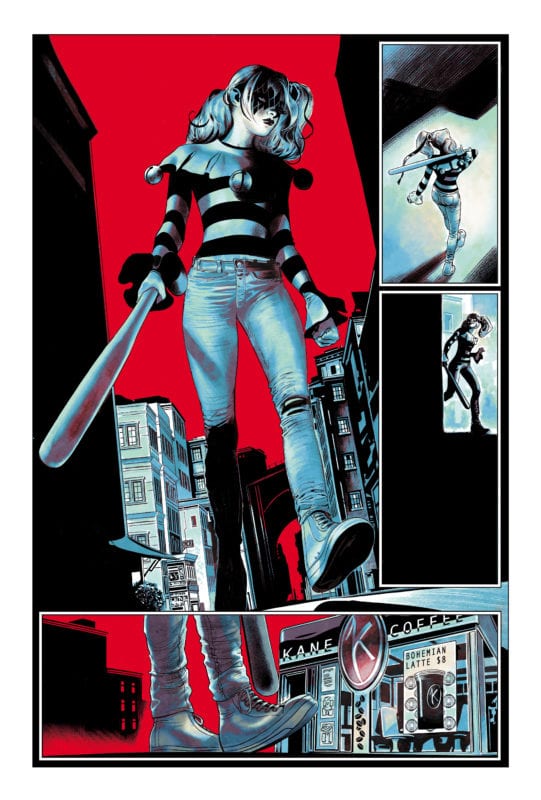 What past comics and representations did you read/watch/draw from?
I read a lot of Jimmy Palmiotti, Amanda Conner, and Chad Hardin’s Harley Quinn books.

What kind of teenager is Harley Quinn in your book? What makes her voice unique?
I pictured Harley Quinn as someone who likes to talk, and who is fine with her own take on how to describe the world around her. So she makes up words and just talks through whatever she’s thinking in this very honest free flow.

We talked to Steve Pugh about working with you on this project. And he said, “I love how Mariko found a voice for Harley that brought the character to life from the first lines of the script, making everything new and different while keeping Harley’s soul intact. Once I read Mariko’s pitch, I had to draw her hilarious, fearsome characters. I needed to be in on this.” What was the partnership with Steve Pugh like on this title?
I am a huge Steve Pugh fan. As soon as I saw what he did on The Flintstones comic with Mark Russell, I wanted to do this book with him. All his character design, all that flavour and tone of his illustrations, bring so much to this book. He really has such an incredible sense of the story; it was amazing to create this book with him. 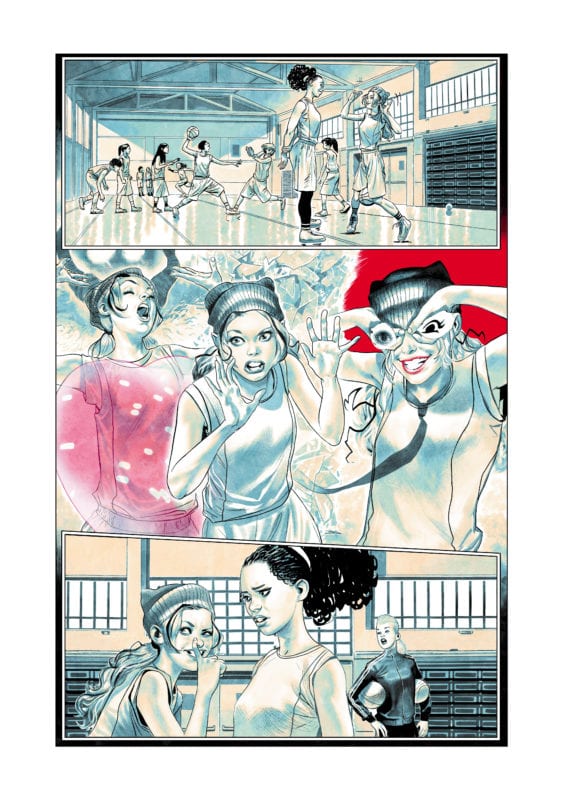 In interviews about earlier books you’ve talked about having a soundtrack when writing or a mood board or a current obsession that finds its way into the work. Any inspirations and influences when writing Harley Quinn, Breaking Glass?
I listened to a lot of RuPaul, a lot of B-52s, and a lot of ’80s music for this. Lots of George Michael for some reason.

How did the drag-queen storyline develop in this book?
As soon as I had the idea for this story, I knew I wanted to have drag queens in it. Partly because I’m obsessed with drag, partly because it seemed the perfect fit for a character that has such a theatrical style. I just thought, where might you get your hands on all that makeup and cool clothes? Why not from a family of drag queens? 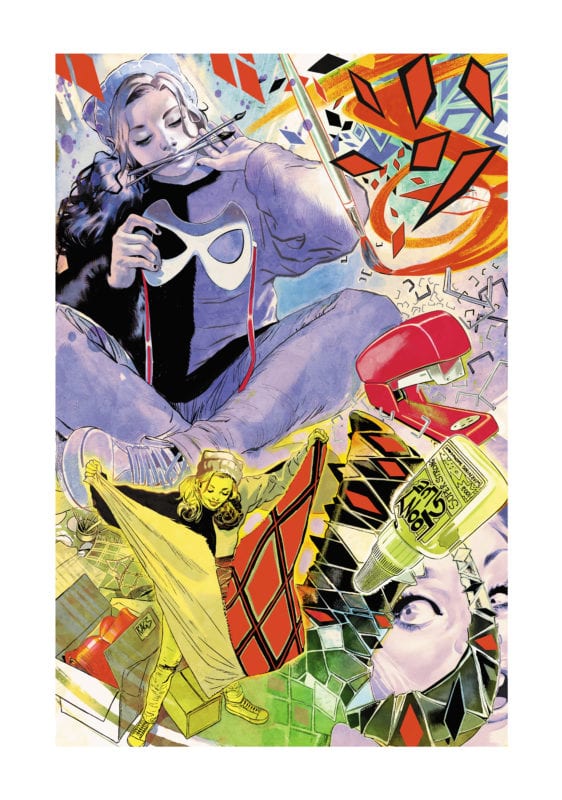 You’ve used the word intersectionality when talking about this book – can you expand on that?
Part of this book is about thinking about power and discrimination, which is an ongoing conversation between the three main characters. I wouldn’t say this book directly addresses intersectionality. I would say it is, on one level, about a character trying to understand what power and discrimination mean. I think the answer to the question, “What is wrong here?” is never just about one thing. 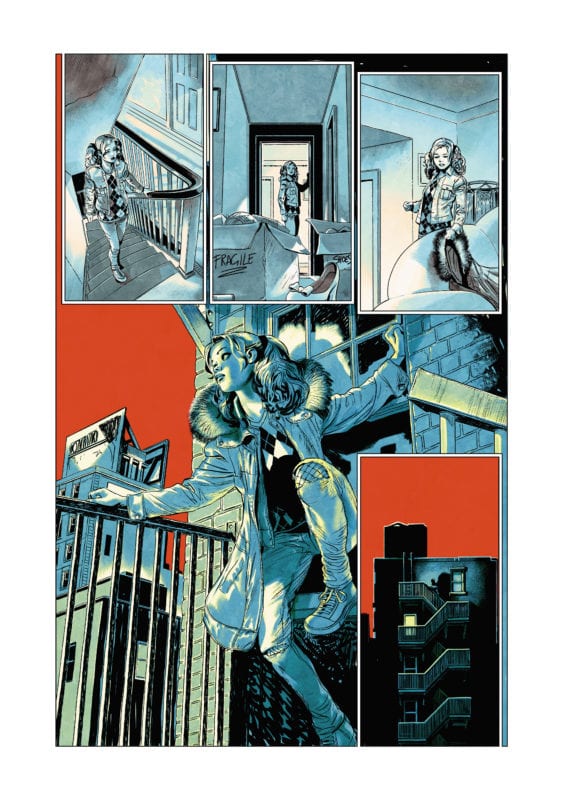 Harley Quinn, Breaking Glass will be released by DC Ink Books in September 2019.