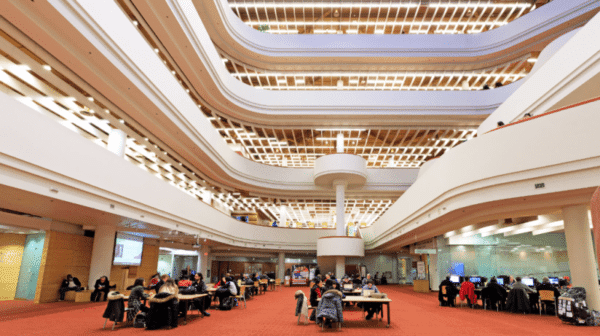 The Southern Ontario Library Service announced last week that its funding, along with the Ontario Library Service – North, had been slashed in half under the 2019–2020 Ontario budget. For SOLS, that means a budget axed from $3 million to $1.5 million. OLSN has confirmed a “substantial cut” to their $1,687,716 2017 – 2018 provincial grants.

For the casual library patron, the impact of these cuts might not be immediately obvious. The two impacted organizations support all of Ontario’s library systems, which are in turn funded municipally. Services offered by SOLS and OLSN include training, tech support, and interlibrary loans, which have been suspended.

While individual library branches won’t have their budgets directly affected, the suspension of services offered by the umbrella groups will force branches to make difficult choices in which expenses they are willing to pick up, if any. OLSN CEO Mellissa D’Onofrio-Jones and SOLS CEO Barbara Franchetto explained some of the services that their organizations offer and the trickle-down impact of the cuts.

What has been cut so far?
Interlibrary loans – where material is imported from another system – have been suspended in both systems. SOLS offered van-courier service where it was cost efficient, but has since laid-off 24 drivers. Other materials were sent via Canada Post in both the northern and southern systems. “That’s the one we tackled first because it is such a huge part of our budget,” Franchetto says.

How will this affect my local library?
Libraries may opt to use a part of their budget to continue to pay for material to be shipped in from other systems, but the timing of the budget makes Franchetto sceptical. “Libraries operate under a calendar fiscal year, so they are well into their budget year,” Franchetto says. “This would be a surprise expense for them and one that they would have to think very hard as to whether they will pay for.”

D’Onofrio-Jones says there will be a similar budgetary ripple effect through northern branches. “Each individual library will have to bear the cost of postage for interlibrary loans,” she says.

Does this impact libraries outside of Ontario?
The cancellation of the interlibrary loans means that other provinces can make requests, but it will be up to local Ontario libraries to determine if they have the budget to accommodate the shipping costs.

When will the rest of the cuts be announced?
“We hope to come to a decision by the end of this week and let our libraries know what else we will be cutting,” Franchetto says. D’Onofrio-Jones is working on a similar timeline. “There will be further information in the coming days about how this will effect our ability and capacity to provide services and what we will have to choose between,” she says.