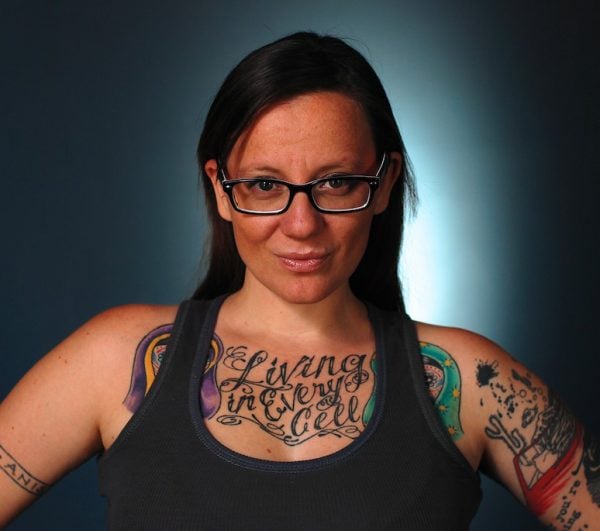 Cherie-Dimaline is among the 2018 Forest of Reading nominees

Cherie Dimaline has published four books and has been writing for 10 years, but it wasn’t until last week that she saw herself as a writer. Her first YA novel, The Marrow Thieves (Dancing Cat Books) – a dystopian story that envisions a future Canada where the government is harvesting the bone marrow of Indigenous people because they are the only members of the population who can still dream – won the $25,000 Governor General’s Literary Award for young people’s fiction and the prestigious $50,000 U.S. Kirkus Prize for Young Readers’ Literature. The Toronto-based author spoke with Q&Q about what this recognition means to her.

Can you tell us about last week?
After the GG I thought, “Ok, it really can’t get any better than this.” There was so much attention on the book, which was fantastic. I’d convinced myself that the Kirkus was out of the question – no way they’re going to give the Kirkus to a book that’s not only Canadian but that’s Indigenous – it just seemed ridiculous. Plus, I was up against Angie Thomas’s The Hate U Give – 34 weeks on the New York Times bestseller list. Her tweet from two days ago was, “Just met Obama.”

The day it was supposed to be announced I worked late [at Tribal Councils Investment Group of Manitoba] so I didn’t have to think about it. I was getting ready to leave, digging through the drawers in my desk for change for the TTC – I was 10 cents short. As I’m doing that my phone started going ping ping ping, all these tweets were coming in. When I saw that Marrow Thieves had won the Kirkus I literally sat on the floor by my desk and bawled my eyes out.

What do these prizes mean to you?
This story in particular talks about the commodification of culture, the loss and importance of language, the role of elders, about the two-spirited community, and I even refute the Bering Strait theory – everything that was in me came out [in this book]. The awards mean this: people are going to read the book and if I really allow myself to be an optimist they might for a second feel a bit of kinship with these characters and come to understand our perspective or world view on life, and where we are now and where we have to go. The awards are so critical and important because it will start or continue a larger dialogue and I hope it will influence people’s opinions. Because it’s YA, it’s talking to future leaders who will sit in front of things like the Indian Act, pipelines, traditional territories.

This was a year when many children’s writers examined the impact of residential schools, including David A. Robertson and Julie Flett, whose When We Were Alone also won a 2017 Governor General’s Literary Award for young people’s fiction. Does it feel like there’s a critical mass?
For a long time there was this idea I was hearing from teachers and industry people: “How do you explain residential schools to Canadian kids? It’s too difficult.” But our kids don’t have that choice, because they don’t speak their language, their grandparents went to those schools, the last one closed in 1996. This is an ongoing reality. If our kids can get it and be good people and thrive in this society, than your kids can get it. And how about they can get it together by sitting in a circle and saying let’s talk about this – we can do this. So I’m really happy that so many stories have come forward, especially aimed at young readers because that’s where change starts.

Even before the awards, what was your experience putting this book into the world?
A couple things were surprising to me. The United States jumped on the book right away, not just Kirkus. I was talking to a reporter from California and asked her why does the U.S. care about this Canadian book, this Indigenous book. I said, “No offense but you guys don’t really give a shit about Indigenous people and the only time the U.S. was mentioned in the book was when I say you were part of the water wars, you came for our fresh water.” But the reporter told me, “Your book is dystopian and talks about the end of the world and do you know who our president is? Basically our reality is this, this is our biggest fears every day, you’re speaking to people who are looking for answers.” The second thing that happened is that because the main love story in the book is a gay love story, I had a lot of people from the two-spirited community reach out to me – especially young people – and say thank you for writing us into the future.

How did writing YA feel compared to your other books?
It was so fun. I know it’s a difficult story but it was so fun to write because I was writing from a young perspective. There’s that immediacy, where everything is the best thing in world or absolutely heartbreak and I can’t get out of bed. That’s a really tumultuous time, but it was so fun to be immediate and passionate. I didn’t have to go up on a hill and make lofty observations and literary viewpoints and think, “Could this win the Giller?”

Do you see yourself continuing in this genre?
I would like to continue in some way to write YA. I met with 300 high school students in B.C. and I was never more scared that they were going to rip me apart. They’re going to say, “Why are you wearing those shoes?” or “Why are you still talking, I want to be on my phone.” But they were brilliant. They had really great technical questions about the writing process, and they also asked, “How do I be a better ally without taking up space? How can we access Indigenous world views so that we’re learning from that perspective?” I wasn’t shocked, I know kids are smart – but I was so hopeful that that is where they went with it. I would love to be a part of that work because that’s really moving.

How has the experience of this book and the awards changed you?
It shouldn’t take awards, but honestly I woke up this morning and the first thing I thought was, “Oh my god, I’m a real writer.” So that’s new.