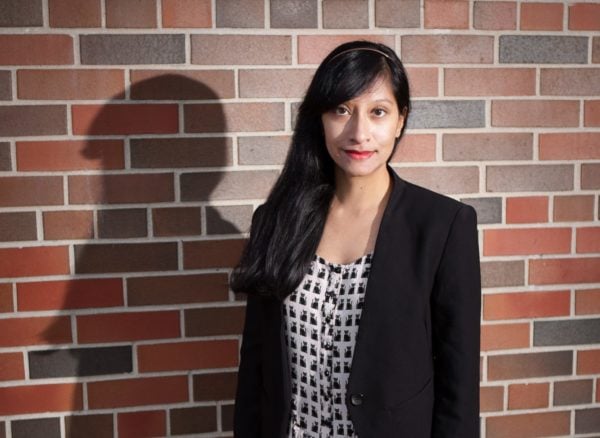 Doyali Islam is the new editor of Write, the Writers’ Union of Canada member magazine. She is an award-winning poet, author of the collection Yusuf and the Lotus Flower (BuschekBooks), and the poetry editor of Arc Poetry Magazine. Islam assumes the editor’s chair from Hal Niedzviecki, who resigned earlier this year following a controversial editorial on cultural appropriation. She recently spoke to Quill & Quire about her new position.

Why do you think you were chosen for this job? What unique qualifications do you bring to the position?

Since the Writers’ Union of Canada announced my appointment, support has come in from across Canada. I hope that this support reflects two things: first, the genuine relationships I have cultivated within the literary sector over the past seven years; and second, my community-building efforts. For more than two years, I volunteered as the curator and host of North Bay’s Conspiracy of 3 Literary Reading Series – diversifying its features, expanding its audience, and securing some Canada Council funding. C of 3 is where I first learned the meaning and value of community and community-building, and I hope that these core values permeate my actions, gestures, and breath more and more with each passing day.

As the current poetry editor (and former interim reviews editor) of Arc, process and product are equally important to me. I take pride in treating contributors with respect and handling their work with care, and I plan to bring this editorial practice to my position at Write. Furthermore, as both poet and editor, I value attentiveness, capaciousness, adaptability, calculated risk-taking, and discernment. I also value forethought – the ability to anticipate challenges before they arise.

My undergraduate degree from University of Toronto lies at the intersection of English literature and equity studies. I have always been extremely sensitive to language, and as a poet, this sensitivity has served me well. At U of T, my primary interest was to read various texts in order to detect and contemplate the ways in which people wield language to either reinforce or rupture dominant discourses and the related systems of knowledge, value, and power.

What are your thoughts on Hal Niedzviecki’s controversial “cultural appropriation” editorial and the events that transpired following it?

Let me be clear that I speak for myself and not on behalf of the union. Furthermore, as a non-Indigenous person, I acknowledge that I, too, am a settler on this land.

I think it is valuable to situate the “Winning the Appropriation Prize” editorial and its aftermath in relation to American poet Adrienne Rich’s message to Jane Alexander, the 1997 chair of National Endowment for the Arts. In this letter, Rich refuses the NEA Medal of Arts – that prize – stating “art […] means nothing if it simply decorates the dinner table of power which holds it hostage.”

In the aftermath of Hal Niedzviecki’s editorial, I found myself again thinking through the relationships between art-making, publishing, gatekeeping, perceived value, prize culture, and the preservation, erasure, and distortion of cultural and historical memory. I say “again” because, for many Indigenous, racialized, and otherwise-marginalized individuals and communities, the experience was the most recent wound in a long history of wounds.

As for the Writers’ Union of Canada, it experienced a true crisis – in the etymological sense of “turning point in a disease,” rooted in the verb “to sieve.” TWUC is beginning to address systemic, cyclical issues. An opportunity to sift. An opportunity for organizational rebirth.

How did you feel about the demands made by the union’s equity task force? Were they asking too much, not enough, or the right amount? What do you think were the best takeaways from the list?

Initially, I felt ambivalent. I wasn’t sure what the list would yield in terms of actual systemic change. As the amended task-force statement itself points out, “An apology is only worth its salt if it opens the door to better actions and better relations in the future.” Now, of course, I feel hopeful. And I prefer not to dissect their actionable list. I think it is important to preserve this document as a whole, with all of its valuable considerations and angles.

What are your plans for the magazine moving forward? What will your approach be? How will the magazine differ? Will there be changes to the editorial process?

The approaches and qualities that I bring to the position of Write editor are the same ones that found my poetic practice: the ability to hold a space open for interrogation through mindful and challenging introspection, philosophical questioning, and factual research; a belief that, as living beings, our lives are inextricably interconnected; the capacity to listen keenly; the ability to sense and track what is urgent; and the ability to be ruthless in acts of distillation – in short, the ability to attend. As a poet and an editor, I attempt to serve something that is not the ego.

In terms of content, the magazine will welcome diverse voices more readily. Sections – in particular, Dispatches and features – will become more distinct from one another. Guidelines are in place to ensure that every submission receives equal consideration and care.

In terms of editorial process, the 15-week Write production schedule now includes a mandatory “sensitivity reading discussion” – which means that the editorial board will review all issue materials in advance of its second meeting, such that board members can voice questions and concerns. The production schedule affords me sufficient time for engaging in one-to-one dialogue with a contributor whose piece is in question, until both the contributor and I are satisfied with the revisions.

Beyond these changes, I reckon growth will be organic – especially as I adjust to and gain confidence in the role, and as the editorial board and I learn each other’s communication styles.