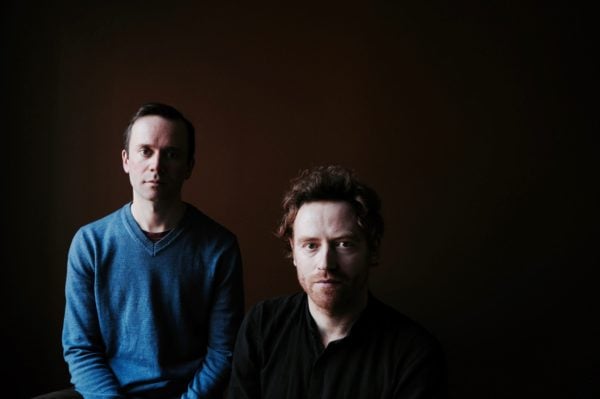 The novel, which was first released in 1945 and is regarded as a masterpiece of the genre, is a passionate recounting of Smart’s affair with British poet George Barker.

Heavy Bell’s album adaptation, By Grand Central Station, was written by Matt Peters, frontman of the band Royal Canoe, and Tom Keenan, an actor and singer-songwriter. They were joined on the litpop homage by more than 20 guest musicians and vocalists who sing original passages from the novel as lyrics. The album was released on Jan. 12 and is available on streaming services and by order at Canadian record stores.

Heavy Bell’s seven-city tour, featuring Peters and Keenan accompanied by a chamber ensemble, began in Winnipeg on Jan. 13, and travels through Montreal, Ottawa, Toronto and Calgary in February.

Quill & Quire spoke to Peters and Keenan about the process of adapting Smart’s work.

Have you written musical adaptations of literature before?
The first major project we did together was a collection of songs for a production of Shakespeare’s The Winter’s Tale. We also worked together on a retelling of King Richard II. It’s all an overlapping eight-year journey of creating this music.

What drew you to this novel?
A friend of ours came across it when Yann Martel was doing the recommended reading list for Stephen Harper. None of us had heard about it before. We were ready for a new project and this seemed like such an obvious choice. We were so struck by its lyricism.

What was the next step?
We sat down at Tom’s piano, which is a magical piano – where ever you set your hands down a song happens – and wrote the songs in a quick process. I think with the novel’s momentum we didn’t want to overthink what we were doing. Then it took a few years to develop. We wanted a fuller, denser arrangement that sounded organic and acoustic. We had to figure that out as we went, and then we recorded it. We didn’t feel the need to rush or compromise anything.

What was your approach to the poetic and emotional aspects of the book?
The very first song on the album is the entire first paragraph of the novel and the moment of Elizabeth Smart sees George Barker and his wife. The anticipation was what we wanted to capture. It’s about her feeling at that moment and the intensity and surprise of it. We kept this framework right through to the end, and for the most part, we didn’t add any words to hers. It’s abstract the way we approach it, like little reflections of moments – emotional snapshots.

How are you performing it on tour?
We play the album from start to finish. On the record we have a couple of readings by Elizabeth Smart we managed to get from the CBC, and at the shows we have readings by different actors in each city. Each reader chooses a passage, and we play background support music for their readings. There’s improvisation involved because each reading has different climaxes and swells. We have to listen to the reader, the reader listens to us, and we respond to each other. It’s really fun.

How are your music fans responding to the book?
At the first show we partnered up with a local bookstore and sold out of copies of the book really quickly. Our initial impulse for this whole project was to share the novel, so we’re happy people are responding so positively. We’ve had to order more books. Some people have heard of this book, but a lot of people haven’t, and I think people are really turned onto it.

What do readers think of the album?
People who’ve read the novel will know the language is so very musical. There’s a melodic component to Smart’s writing. You can tell when she’s giving her reading she can hear it for sure. I think that people are happily surprised the music is pushing the words to a different place. There’s an extra dimension to it. When a filmmaker tries to adapt your favourite novel it inevitably disappoints you. If we were trying to adapt it in that way I think it would be a lot harder to please fans of the novel, but this novel sent us spinning off on this musical path, and it’s easy for fans to go down this path with us.