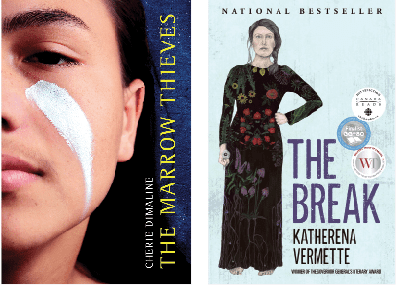 Politics, drama, mystery, and art are among the subjects covered in the Toronto Public Library’s Native Peoples Collection. The variety among its 317 titles is impressive, but many of them have one thing in common: they’ve been checked out.

“We’ve noticed increased, sustained interest from TPL customers for Indigenous materials,” says Michele Melady, manager of collection development and membership services at TPL. “It’s all kinds of material: fiction, non-fiction, even poetry. The material is circulating broadly in all areas of the city.”

And across the country, too: library staff throughout Canada are reporting a rise in demand for Indigenous reads. In Toronto, hold lists for Cherie Dimaline’s 2017 YA novel The Marrow Thieves (Dancing Cat Books) and Katherena Vermette’s 2016 novel The Break (House of Anansi Press) are typically in the triple digits.

At the Vancouver Public Library, Thomas King’s 2012 historical survey, The Inconvenient Indian (Doubleday Canada), reigns as the most borrowed book by an Indigenous author. In Newfoundland and Labrador, popular titles echo bestseller and awards lists, with Tanya Talaga’s Seven Fallen Feathers: Racism, Death, and Hard Truths in a Northern City (Anansi), Joshua Whitehead’s novel Jonny Appleseed (Arsenal Pulp Press), and Sheila Watt-Cloutier’s 2015 memoir The Right to Be Cold: One Woman’s Story of Protecting Her Culture, the Arctic and the Whole Planet (Penguin Canada) among the books most in demand.

Anna Swanson, provincial selection coordinator for Newfoundland & Labrador Public Libraries, has noticed an increased demand for children’s material on Indigenous peoples, languages, and local history. “I’ve heard from teachers who are looking for materials for early childhood education, preschool daycare workers who are looking to include Indigenous materials in their story times, an Inuit adoption group who was looking for more diverse books,” says Swanson. “In the 10 years that I have been doing this, the amount, quality, and production value of Indigenous material published in Canada especially has improved immensely.”

There has been a surge in demand on the West Coast as well, reports Kay Cahill, acting director of collections and technology at the Vancouver Public Library. “Some of our branches report they literally can’t keep the children’s collection on the shelves,” she says.

VPL first expanded its Indigenous collection in 2016 in response to the Truth and Reconciliation Commission of Canada’s Calls to Action report, which summoned Canadian libraries to expand materials and programming related to residential schools.

“We wanted the collections to reflect and honour the cultures, the experiences, the interests of the communities, and the histories that are associated with it,” Cahill says.

The library’s collection profile for selecting Indigenous material was developed in consultation with local First Nations groups. Criteria outlined in the report includes an emphasis on Indigenous writers and themes and material that illustrates Indigenous storytelling techniques.

Colette Poitras, manager of Indigenous public library outreach for the Alberta public library services branch, says that readers are becoming more selective in their choices and are seeking out books by Indigenous authors. “People are trying to find stories that actually speak the truth,” she says.

Having identified the demand for Indigenous material, libraries are now implementing creative approaches to increase their discoverability. TPL has started flagging relevant material by affixing a Native Peoples’ label to the spines. The Edmonton Public Library has an online storytelling bank, Voices of Amiskwaciy, for Indigenous communities to contribute text, audio, and image content. VPL has a storyteller-in-residence to continue the oral tradition of sharing Indigenous stories.