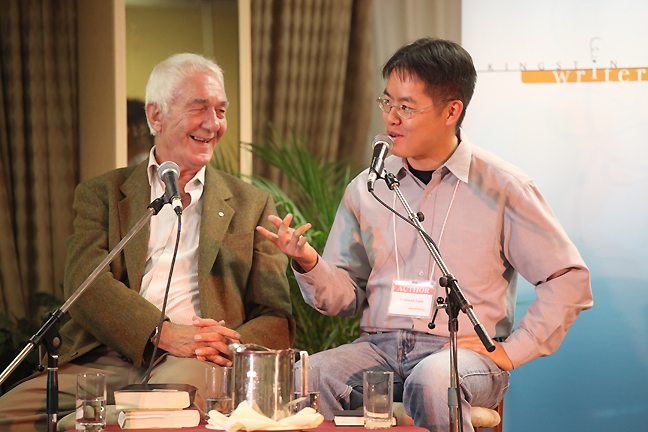 Richard Gwyn, left, seen in conversation with Vincent Lam at the Kingston WritersFest in 2011 (Bernard Clark).

Richard Gwyn had absolutely no interest in sports. For a British-born transplant to Canada, a country where an affinity for hockey is tantamount to a secular religion, that disinclination singled him out from the get-go. When Gwyn was working as a panellist on the TVO current affairs programs Studio 2 and its spinoff, Diplomatic Immunity, fellow on-air personality Steve Paikin would tease him about whether he had watched the Leafs game the previous evening. “This was something that millions of people in Ontario and Canada cared a great deal about and he could not have cared a fig,” says Paikin.

As it turned out, Gwyn’s lack of enthusiasm for our national pastime provided him the opportunity to devote his attention elsewhere, to what he really cared about. What Gwyn cared about – deeply, to the point of obsession, almost – was politics. A lifelong Catholic and brigadier’s son who was born in England in 1934, Gwyn emigrated to Canada at the age of 20 and became one of the country’s most prolific political columnists and analysts. He married Sandra Fraser in 1958 and the two became one of the premiere power couples in Ottawa’s press pool. “Sandra Gwyn was really my mentor, but they operated as a team,” says author and former Saturday Night political writer Charlotte Gray. “What they both really understood was the importance of where people come from and the history behind different political streams.”

Sandra Gwyn died from breast cancer in 2000 and Gwyn subsequently married writer Carol Bishop, who remained his constant companion until his death from Alzheimer’s disease on Aug. 15, by which time Gwyn’s reputation as one of Canada’s most incisive and astute political thinkers was well entrenched.

In 1976, when Patrick Martin was hosting and producing the current affairs show Capital Report for CBC, he was looking for people to appear as political commentators and was told by his superiors he had the freedom to hire whomever he wanted. Martin selected The Globe and Mail’s Geoffrey Stevens and Gwyn. “He booked Richard Gwyn because Richard was the dean of the parliamentary press gallery,” says Paikin. “He was the number one observer of the national condition of our country.”

As a journalist, Gwyn was competitive and exacting, but also generous to colleagues and open to civil debate and discussion. When TVO launched Studio 2 in 1994 with correspondents Janice Stein, Eric Margolis, and Gwyn, it was Gwyn who often found himself occupying the ideological middle ground between his two co-hosts. Paikin points out that Gwyn was literally seated in the centre between Stein and Margolis during the show.

The irony of Gwyn’s ability to pierce the heart of the Canadian national condition is that Gwyn was not originally from Canada. “Maybe it took a guy who wasn’t born and raised here to be able to see what was hidden in plain sight,” says Paikin.

“It does help to be an outsider, partly because you’re not afraid of asking the dumb questions,” says Gray, another English transplant to Canada. “I’ll tell you one of the things I think about Brits coming here and those that do well on TV panel discussions – and it’s the same with Newfoundlanders, too – it’s conversation as entertainment not just as education.”

In addition to his gargantuan output of political writing and commentary, Gwyn was also an author of seven books, the best known of which are his 1980 biography of Pierre Elliott Trudeau, The Northern Magus, and his massive, two-volume biography of Sir John A. Macdonald, John A.: The Man Who Made Us – The Life and Times of John A. Macdonald (2007) and Nation Maker: Sir John A. Macdonald – His Life, Our Times (2011). The first volume won the 2008 Charles Taylor Prize, while the second took home the Shaughnessy Cohen Prize for Political Writing.

Anne Collins, publisher of the Knopf Random Canada Publishing Group and editor of the two-volume Macdonald history, praises Gwyn’s ambition in turning from political reporting to a massive biographical undertaking. “We don’t really have a tradition of the sort of presidential biographies or the heavy Civil War studies – all the things the American academics really dig into and know how to write for a general public,” Collins says. “We have a bunch of historians who really had carved the world up into very small pieces and not tackled anything quite like this.”

Published at a time before the current reckoning with the more distressing racist and colonial aspects of Macdonald’s legacy, Gwyn’s books were an attempt to redress this lack of historical knowledge, while at the same time being careful not to gloss over some of our first prime minister’s less-than-stellar qualities or policies. “It’s certainly time that there was a reassessment of the great historical figures who we revered fairly uncritically until recently,” Gray says. “If you look at the way [Gwyn] treated the whole Louis Riel episode, that was very different from previous, much more admiring accounts.”

Equally notable is that the books were produced when the author was in his 70s. “To be able to produce work of that quality and density and originality in your mid-70s [is remarkable],” Paikin says. “He was doing the best work of his life in his mid-70s.”

For Collins, this was a natural outgrowth of the many years Gwyn spent writing, talking, and thinking about Canada and its political system. “He spent all those years looking at the life of Canada, the nature of our public discourse, the way our politics worked,” she says. “He loved the place enormously.”

So deep was Gwyn’s devotion to his adopted country that he had contracted to write a short volume intended to be “his love letter to Canada,” according to Collins. That plan was derailed when his Alzheimer’s diagnosis forced him to quit writing his bi-weekly Toronto Star column in 2016. “As soon as he realized he couldn’t hold the same kind of argument in his head that he’d always been so capable of holding, he called me up and said ‘I need to come and talk to you,’” Collins says. “He sat me down and said, ‘Anne, there’s no way I can do this book because my equipment isn’t working. I’m not firing on all cylinders.’”

In one of his final Toronto Star columns, following the 2016 vehicular terrorist attack in Nice, France, Gwyn made an argument for the export of Canadian values around the world: “Many years back we made a major contribution to international affairs by developing the idea and the institute of peacekeeping. Somehow we need to develop a contemporary equivalent, this one based on the presumption that all are equal. Easy to say; excruciatingly difficult to accomplish. But it’s what the world needs.” This seems to encapsulate his view of Canada as a place where, evident social and political ills notwithstanding, the opportunity for greater harmony and inclusiveness is apparent.

“He basically thought we had the potential to be better at all those things than any other place on the planet,” Collins says. “He really thought we had crafted a place where we could have democratic discussions, where we had the give and take to absorb crises and to carry on.” It’s a perspective that will be sadly missed in our current historical moment.