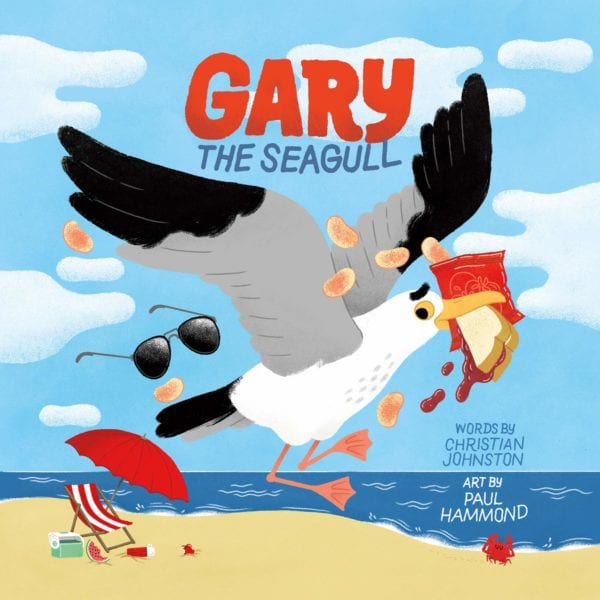 When Christian Johnston hosted a recent Facebook Live reading of his first children’s book, Gary the Seagull (Nimbus Publishing, June), he was worried that fans of his decidedly grown-up music were going to post inappropriate comments that little kids would see. But to his surprise, everyone behaved.

Since 2002, Johnston has performed his unique brand of Canadian comedy rock under the name B.A. Johnston (taken from his high school nickname Bored-Again Christian). While his music – which often references his hometown of Hamilton, Ontario, and is filled with quirky pop culture and junk food rhapsodies – may speak to a college-aged crowd, Gary the Seagull is a story he wrote for his five-year-old son, Harvey.

Made with illustrator and long-time creative partner Paul Hammond (who has done the art for almost all of Johnston’s album covers, gig posters, and concert T-shirts), the picture book features an exasperated beach bird who is bound and determined to get himself some ketchup chips. This seagull has an attitude – not to mention, a passing resemblance to a certain SCTV actor. Johnston and Hammond spoke with Q&Q about Gary and their past and present collaborations.

How did your partnership come to be?
Paul Hammond: We met 15 years ago, when we were both living in Halifax, and Christian asked me to do a T-shirt design. I think my first draft had the Golden Girls on it and said, “Thank you for being a friend.” Sophia was in the middle, but it was her hair and glasses with Christian’s face. I sent it to him and he said, “No, that’s terrifying.” So we changed it to be just normal Christian with the other girls around him.

At this point, we basically have our own visual language. He messages me something like this: “Okay, I need a new shirt. Here’s the idea: it’s Big Trouble in Little China, except it’s the California Raisins, and I’m one of the raisins and then the bad guy is ALF.”

Christian Johnston: It’s been a great relationship. It kind of reminds me, in a weird way, of Iron Maiden, where people really identify the Eddie character with the band. All my fans talk a lot about the shirt designs, and it’s another side of the show itself. In fact, I sell more shirts than albums.

What was the inspiration for Gary the Seagull?
CJ: I take my kid to the beach a fair bit and you see a lot of seagulls. We started calling the seagulls Garys, and Harvey would chase them away when they tried to steal our food. They’re kind of fun birds to watch; they’re very crabby, angry birds. So I basically started telling him a story about a seagull trying to steal his lunch – it was just a bedtime story.

What makes Gary so charming?
PH: When I was drawing and sending stuff back and forth with Christian, I kept thinking, ‘How do you make a bird have expressions if all he has is a beak?’ Gary’s got a bit of a rough edge, he’s a little surly, and somehow we landed on giving him big, bushy eyebrows. They really helped him emote and they ended up really making him fun – like Eugene Levy.

Do you use any other inspirations when drawing Gary?
PH: I looked at Scuttle from The Little Mermaid and the albatross from The Rescuers. Seagulls are weird, the way their bodies move is so interesting. Their heads can be tucked right in but they can also stretch their necks out way farther than you think they can. I was trying to find ways of making it pleasing to look at and fun, and I was not sticking to being too realistic because I knew the story was going to go pretty wild.

How does it feel to be first-time picture-book authors and illustrators at this moment in time?
CJ: I never put out a book, so none of it is normal for me. This is a big departure from what I do for work and I don’t know anything about publishing. But a lot of the stuff I was excited for is cancelled. A couple bookstores wanted to throw parties, and who doesn’t want to hang out in a Hamilton bookstore with a bunch of Roma pizza and sign books for little children? That sounded like a good time.

What’s next for Gary?
CJ: I’ve got an idea for a Gary sequel where he accidentally becomes a surf champion.