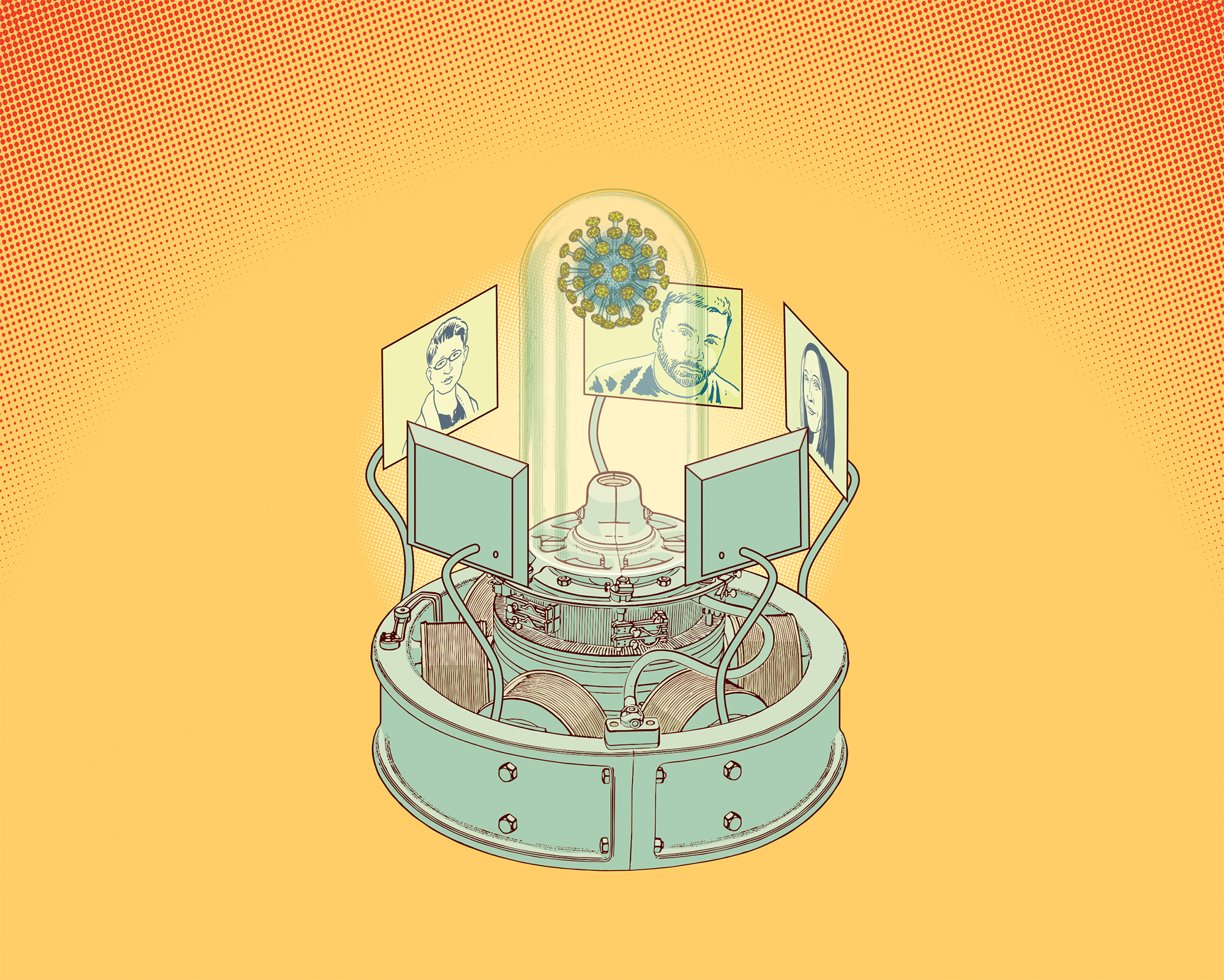 Written with urgency in the early days of the COVID-19 pandemic, three recent works of nonfiction serve as vital records of this historic time. In Field Notes from a Pandemic: A Journey through a World Suspended (Signal/McClelland & Stewart), Ethan Lou shares his prescient and personal thoughts while travelling through Asia, before quarantining in Germany. In Chronicling the Days: Dispatches from a Pandemic (Guernica Editions), Marianne Ackerman and Linda M. Morra orchestrate a chorus of 100 voices, each expressing a mix of the profound and mundane. And in Be Kind, Be Calm, Be Safe: Four Weeks that Shaped a Pandemic (Allen Lane/Penguin Canada), Lynn Henry writes with her sister Bonnie Henry, provincial health officer of B.C., about the fast-paced decisions that affected millions of Canadians.

We gathered everyone (remotely) to speak about publishing during the pandemic.

We heard of the dangers of the virus in January 2020, but things ramped up in March. How quickly did these projects come about?

Ethan Lou: Very quickly. I started writing even before the contract was signed. My agent had suggested I write about my pandemic experience because of what I had written in Maclean’s [about visiting China in the early days of COVID-19]. The deal was struck in a week or two, last April.

Lynn Henry: I surprised myself. I’m the publishing director at Knopf Canada, so I didn’t see myself as a writer. I was going to B.C. over March break to visit my sister, Dr. Bonnie Henry, and, while I was there, write a new introduction to her first book [Soap and Water & Common Sense: The Definitive Guide to Viruses, Bacteria, Parasites, and Disease (House of Anansi Press)]. I landed on March 12. This was when everything kicked into high gear. I saw how my sister was making decisions. I followed her around and took notes. When I got back to Toronto mid-April, I had the idea to weave my observations of her experiences with her own.

Marianne Ackerman: The Quebec Writers’ Federation had the idea to ask their members to write about one day in their pandemic life for their website. I did one and so did 100 other people. It then struck me, and a few other people with Guernica Editions, that this would make a pretty interesting book – the kind that Guernica should publish during the pandemic because it touches so many people.

These books were all written within a few months. Could you describe the pace?

Linda M. Morra: After the decision was made to turn the posts into a book, it was rapid. It involved getting permissions from the authors, making sure they were happy with their submissions. We went back and forth very quickly, over two weeks. It was very difficult to marshall together the work of 100 different people and then create an evenness of tone while also respecting the range of voices.

Henry: The thing that saved us was that this book is focused on a specific time: from March 12 to just after Easter. And since I know how the sausage is made, I created a detailed outline. I was still working full-time, so I would get up at five in the morning and work until eight just trying to tap out 1,000 words a day. But I had a very good road map. Altogether, the writing took about six weeks. And then, after I finished my pieces, I showed my sister the exact pieces she needed to write. Of course, she had her own ideas about things.

Lou: From start to finish, this book was resolved within two months. Two months of go-go-go. Generally, I’m a “measure twice, cut once” kind of guy. I try to plan, so when I execute, I don’t second-guess myself. What Lynn said about the solid outline is really important. All I did was stick to the proposal. I finished half the book and then passed it on to my editor. I then worked on the rest, and when I handed in another chunk, he passed the earlier chunk to the copyeditor. No component was idle.

Do you keep diaries? Were you always writing things down?

Henry: Usually, I don’t keep notes. It was a coincidence in this case, because I was writing the new introduction to my sister’s book. I would follow her around and scribble down things she was saying, and every night I would try to remember what she had done. Then, after a week, I realized this was an extremely unusual time. If I was ever going to keep a diary, now was the time.

Ackerman: The diary I keep is often about bad times. But this idea that we had to take one day in our lives and write about it – I knew instinctively I had to do it, otherwise I would never be able to remember it the way it happened. The books that will come out later, when people have had lots of time to think, will be different books. But this is an important moment in history that warrants these kinds of flash books.

Lou: I do keep a journal. Once a week, I sum up what I’ve done, but it’s one page of a Word document. It’s mostly a writing journal. It doesn’t capture my personal life. But what I found useful was Google Maps. It tracked me wherever I went. I could go to the timeline and see where I had visited and that helped jog my memory.

Given all that was going on, were you happy to have a project?

Morra: At the time, I had fairly recently lost both of my parents, and so when the call for submissions came – and it’s in the piece I wrote – I remember feeling deep grief, and then feeling that this deep grief was being shared by everyone. So, on the one hand, I had this sense of loss that was very personal, and then a sense of loss that was also collective. I found it very helpful to read these pieces and work on this project.

Henry: Honestly, I don’t know how we did it. I guess I was fuelled by being able to briefly see behind the scenes of how decisions are made that affect millions. I was fuelled by a sense of responsibility, and I think that was my sister’s motivation, too.

Lou: I had another book scheduled to come out that I had to put on hold [a memoir of the cryptocurrency boom, Once a Bitcoin Miner (ECW Press, Sept.)]. And while I would have preferred not to have had to write this book, writing it was a good experience because it was cathartic. The whole trip I was on was not pleasant. It began because I was going to see my grandfather who was dying, so writing for me was a way to deal with this. There is a device in Harry Potter called a Pensieve. Your wand removes a thought from your head, and you put it into a device to be examined. Writing is my Pensieve.

Many writers have struggled to retain focus during the past year. How did you overcome that?

Morra: Due to personal circumstances, I had reached a place where I was not functioning very well. So, it was the strangest thing to work on this particular project. Each piece was like a little gem. It only required so much attention. I could edit a piece, look at it in a sustained way, and then walk away. It was very helpful in my healing process.

Henry: They say that having just the right amount of too much to do can help you. I was already overwhelmed. But a short timeline, a very clear idea of what we needed to do, and fear were great motivators. A great motivator was also not wanting to fail my sister.

What about self-care? How did you make sure you didn’t totally lose yourself?

Lou: I did totally lose myself. For me, writing is self-care. I could be writing and outside the day could turn into night, and the rain could turn into ashes, and I probably wouldn’t notice.

Henry: I found the same thing. My days were very busy, and even though the writing was slow and hard in some ways, it was also incredibly freeing and a relief. I could’ve done it forever.

What was your ultimate goal in writing these books?

Lou: The pandemic followed me around the world. My story arc perfectly tracks how the pandemic started in Asia, went into Europe, and spread to North America. It’s a good historical document, and I was quite cognizant about not dating it. The ideas it tackles are still relevant now.

Morra: From our point of view, it was meant to be a historical record that traces a polyphony of voices that respond to the time.

Henry: I wanted to look at how people act and make decisions at a time when everything shifts. It’s also a portrait of a person – my sister – and our relationship, in a subtle way. As an editor, it has given me new insight into what it’s like to write a book and I’m very grateful for that. I’ve always admired writers, but even more so now.

Christopher DiRaddo is president of the Quebec Writers’ Federation and author of the novel The Family Way (Véhicule Press), out in April. This interview has been edited for length and clarity.