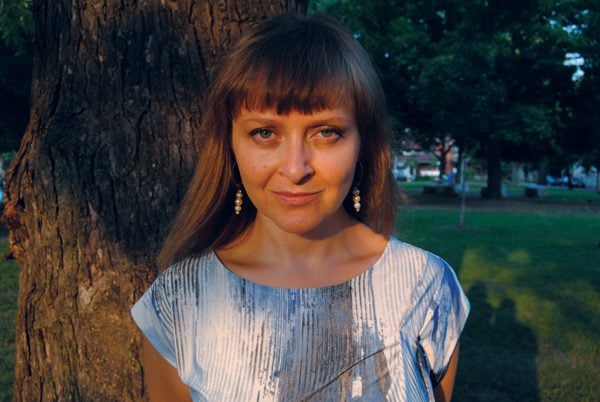 I’ve never believed in an afterlife, not really. I was raised with a mishmash of beliefs, a cherry-picked amalgam of spirituality and magic, cobbled together from family tradition and Eastern practices. And most of them just didn’t take. … I do believe in kindness.

It was the eyes you noticed first. Those large, round, almost preternatural eyes. Eyes that welcomed you and held you and made you feel as though you were the only person in their orbit. It is not at all surprising that people who met Teva Harrison for the first time felt like they had known her for years: she was so open and accommodating and exuded a radiant warmth that manifested first and foremost by way of those piercing, sparkling, frequently mischievous eyes.

But the penetrating eye contact that was one of Harrison’s trademarks could also be mildly unsettling to the extent that it was obvious that behind those eyes resided a powerful intelligence and a razor-sharp ability to cut through any kind of pretence or artifice. Harrison didn’t look at you so much as she looked into you, and her assessment, while always surpassingly generous and empathetic, was sharply – sometimes distressingly – accurate, capable of surprising you with insights about yourself that even you were unaware of.

This was a result of her natural curiosity and uncanny power of observation: she was able to pick up on the smallest, most apparently inconsequential detail of everything she witnessed. It is common to hear the word “magic” used to describe Harrison, and truly there was something magical about her, but a large part of that was a function of her unwavering perception. And what attracted her attention most often were the things that thrive all around us but that most of us are too preoccupied even to notice. (This is one reason she was so adept at finding four-leaf clovers – “I just see them,” Harrison wrote in 2017.)

In August 2013, Harrison and her husband, David Leonard, went on an excursion to the Arctic with Adventure Canada and the Walrus, where Leonard was working at the time. Harrison, a lifelong nature lover who had been making art for as long as Leonard had known her, became obsessed with sketching a variety of Arctic flowers she noted in the course of her travels. “These beautiful flowers that were resilient and tiny,” says Leonard. When Harrison was diagnosed with Stage IV metastatic breast cancer in December of that year, she returned to the drawings of those Arctic flowers, sketching them over and over and over as a kind of meditation, a way of coping and coming to grips with her terminal diagnosis.

But Harrison also conveyed a fierce determination, and she did not remain content to draw and redraw the same flowers, choosing instead to turn her fiery awareness and unsentimental gaze inward and begin work on a series of narrative comics about her experience dealing with her disease and its complications. “The diagnosis became the impetus to create art,” Leonard says. “And also, it gave her something she felt compelled to make art about.”

The result was In-Between Days, Harrison’s 2016 graphic memoir about living with Stage IV metastatic cancer. Published by House of Anansi Press, the book became a bestseller and was shortlisted for a Governor General’s Literary Award. Its searing honesty and undercurrent of hope in the face of despair won Harrison a broad new audience of admirers. “When we found out that she was given this diagnosis of metastatic breast cancer at the age of 37, it was just unfathomable,” says Sarah MacLachlan, publisher of Anansi. “It was truly inspiring to watch how she responded and what it brought out in her.” 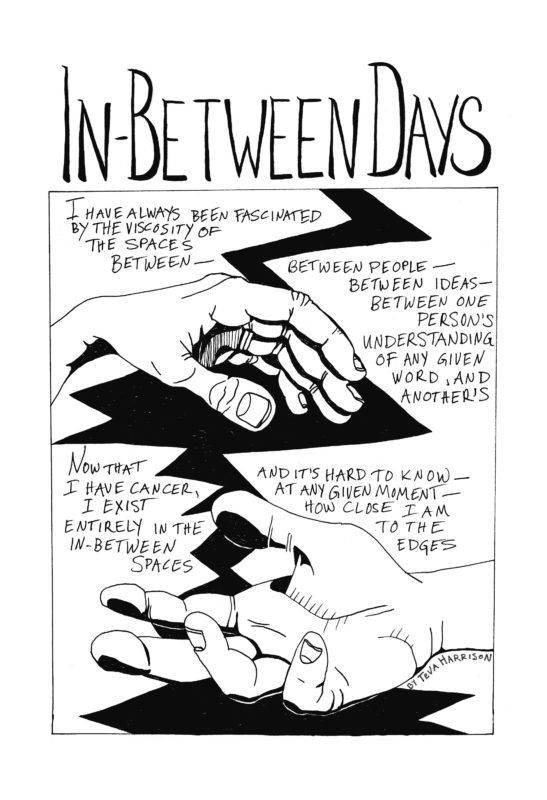 What it brought out in her was a fearless confrontation with the new realities of her life, a bold willingness to stare into the darkness and an almost unbelievable ability to still somehow find the light. A word that keeps cropping up when people talk about Harrison is “liminal” – a term that she herself used to describe the borderlands between sickness and health, life and death. Harrison titled her graphic memoir In-Between Days because that’s where she found herself living, in those liminal spaces that exist in the interstices between a future that was increasingly predetermined and the plain facts of her past life.

Harrison was born in 1976 in the southern Oregon town of Williams. “There was a hitching post in front of the general store when I was a kid; it was that rural,” she told writer Amanda Sage for a 2016 profile on the website Kickass Canadians. She attended Evergreen, the liberal arts college in Olympia, Washington, during the heyday of the Riot Grrrl movement in the 1990s. From there, she took a job as director for the Olympia Film Society, a non-profit organization dedicated to the promotion of independent and classic cinema.

After moving to Seattle, Harrison continued working in the area of independent film, including running what Leonard refers to as a “scrappy, small festival.” While scouting films, Harrison found herself at the Toronto International Film Festival in September 2001; when the 9/11 terrorist attacks resulted in all flights being grounded, Harrison – who was meant to go on to Boston and New York – was trapped in the city. She and Leonard met on Sept. 15, 2001, and were married in 2002. After working in a series of gigs, including a stint as marketing manager at Q&Q in the early aughts, she took a job with the Nature Conservancy of Canada. She was forced to leave that position as a result of her cancer diagnosis, but she refused to slow down, travelling the world in the company of her husband and making regular speaking appearances to advocate for women suffering from breast cancer. She also continued to create, following In-Between Days with The Joyful Living Colouring Book and a poetry collection entitled Not One of These Poems Is About You, which Anansi will bring out in early 2020.

It was being an artist, so much more than being a cancer patient, that was central to Harrison’s character. She was never not making art – from screen printing T-shirts to painting to working as a DJ. “For most of the time I knew her, she did have cancer,” says CBC personality Shelagh Rogers, who met Harrison through the Nature Conservancy and went on to become a friend. “But I remember her talking about how she’d always been an artist and she grew up drawing and she studied art and then worked in the arts. I think if anything, she was such an artist at being human. She made being human into an art.”

In January of this year, Harrison travelled to London for the premiere of Draw Me Close, a virtual reality production by Canadian playwright Jordan Tannahill. The project, which focuses on Tannahill’s mother, who had also been diagnosed with metastatic breast cancer, is a collaboration between the playwright and Harrison. As he was conceiving the piece, Tannahill began looking for an artist to work with and he found himself attracted to Harrison’s style of cartooning. “There was something about Teva’s deceptively simple drawings that really drew me to them,” Tannahill says. “They seemed to reduce a number of extremely nuanced and complex scenarios and emotional states into these very distilled, almost childlike renderings.”

The initial, seven-minute iteration of Draw Me Close previewed at the Tribeca Film Festival in 2017, followed by a slightly longer version that debuted at the first-ever virtual reality program of the Venice Biennale, and the full version was mounted at London’s Young Vic Theatre in January 2019. “It was intensely emotional for her,” says Tannahill of experiencing the complete production for the first time. But he hurries to add that while the material was obviously resonant for Harrison, that did not diminish the spark of vitality that she exuded, even in a context in which the dominant subject was mortality. “Whenever Teva entered the room or was present, she just exuded life,” Tannahill says. “I was always left after spending time with Teva feeling as though I had more life to live.” 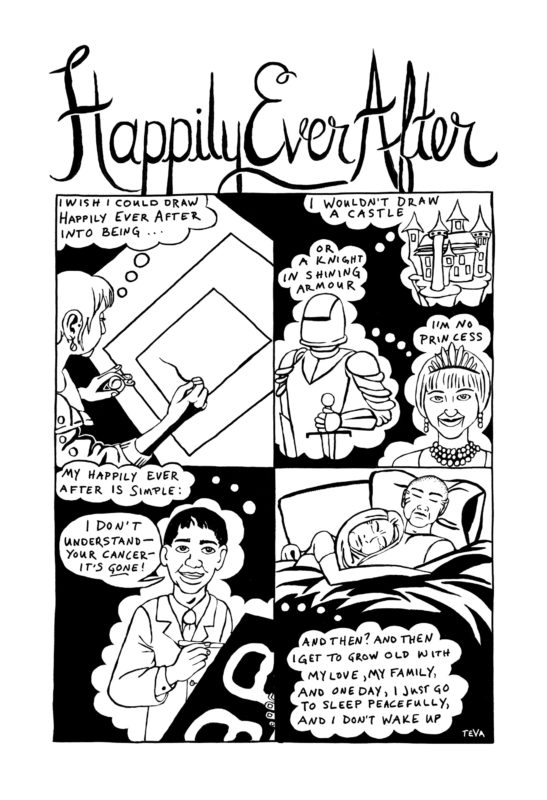 We all have more life to live until we don’t. When Harrison was diagnosed at age 37, the median survival rate for women with her type of cancer was two to two-and-a-half years; Leonard thought it would be a blessing if she were to see her 40th birthday. In the event, Harrison died on April 27, 2019, at the age of 42. She died peacefully in her bed, surrounded by her family. “She lived with hope until the very last minute,” says Leonard. “Even on her last day, if she felt she was dying, she did not speak that to anyone. She felt like she was getting stronger to her next treatment right until the end. That’s just the way that she was.”

Rogers recalls being with Harrison in Hawaii, where they spent time snorkling and came across a school of dolphins. “It was about a two-hour play,” Rogers says. “I remember Teva telling me later on that sometimes, just as she was going to sleep, she could see the dolphins right under her eyelids. This idea of liminal spaces – the space between waking and dreaming. I think she was often in that space. I imagine that the other side of her eyelids were like a movie screen and I can’t even imagine what she saw.”

As Harrison reached the end of her final two-week stay in hospital in late April, following a failed clinical trial that resulted in a blood infection, there occurred a series of rare sunny spring days. Leonard insisted to the nurses that he was taking Harrison outside. Her treatments had depleted her energy level to such an extent that she moved extremely slowly and was able to manage only short distances on foot. Harrison and Leonard proceeded tentatively across the hospital grounds, Harrison alternating between slow, evidently painful steps and being pushed in a wheelchair.

There was a small park to the side of the hospital, and Leonard had noticed on his way in that the daffodils were starting to sprout. “I said, ‘Do you want to go see the daffodils?’ And she said, ‘Yeah, let’s go see some flowers.’” They made their way over to the little park and as they approached a particular corner, Harrison told Leonard to stop pushing the wheelchair. Very slowly and deliberately, Harrison turned her head to where a single daffodil had blossomed among a field of unopened flowers. She gazed at the daffodil for a long moment before craning her neck to look at her husband. “That one is perfect,” she said. “That one is beautiful.” 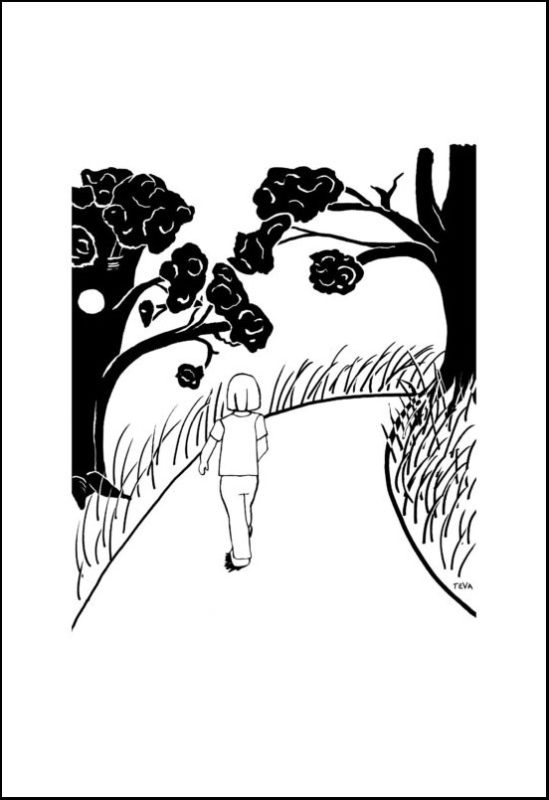 The images in this post are taken from In-Between Days, text and illustration copyright © 2016 Teva Harrison. Reproduced with permission from House of Anansi Press, Toronto. www.houseofanansi.com