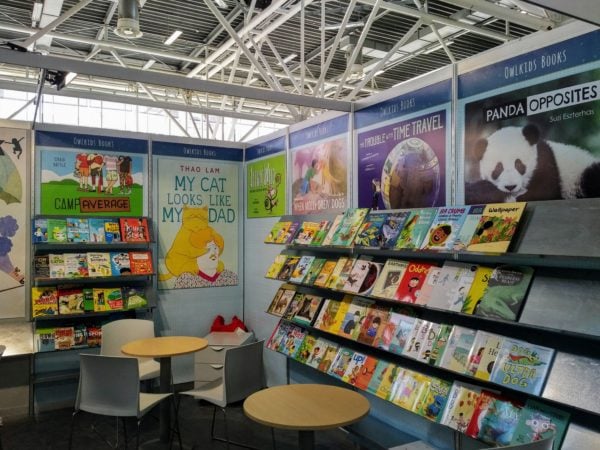 The Bologna Children’s Book Fair is going ahead in person next week after being cancelled for two years in a row over COVID-19 concerns – and the three Canadian publishers shortlisted for its best publisher of the year honour are excited for the serendipity that an in-person event offers.

Judy Brunsek, director of sales and marketing at Owlkids Books, typically attends the Bologna fair with publisher Karen Boersma. Given the ongoing uncertainty around the state of the pandemic, they only made the decision to attend a few weeks ago. Brunsek has packed a suitcase full of folded-and-gathered sheets of Owlkids books from the last two years, and plans to highlight works that came out over the pandemic that other publishers may have missed.

Although virtual meetings on platforms like Zoom have been a helpful workaround, Brunsek says she is excited for the efficiency that an in-person event offers.

“Efficiency makes it sound boring,” Brunsek says. “But you can get so much more from your [in-person] meetings because you get reactions, and you can change gears in the middle of a meeting.”

Virtual presentations are often less flexible, as they are tied more tightly to predetermined presentations and often focus on the publisher’s current list.

“On a Zoom call, I’m working from a Powerpoint, because I need to be able to show visuals. Whatever is on that powerpoint is what I’m talking about,” Brunsek says. “But when you’re at a book fair, you can sell backlist, you can sell everything.”

Being one of five North American publishers nominated for this year’s Bologna Prize adds an extra element of excitement.

“It feels like people were noticing what we were doing for the last two years in the virtual world, still trying to hustle and get word out there and connect with people as much as we could,” Brunsek says.

Lara LeMoal, publishing manager at Greystone Kids, sees attending the fair as an opportunity to discover new books in translation that could be added to the Greystone list. The publisher attended once before in 2019, but as a new imprint that trip was focused on building the Greystone Kids season. This year’s trip, on which LeMoal will be joined by Patsy Aldana, who has an imprint at Greystone Kids, is more about relationship building.

“I’m really going to be focused on trying to meet other publishers and agents that I can buy and sell to for future years,” LeMoal says. “We’re more established now and it just means that those relationships for the future become more important than just looking to acquire a single book.”

LeMoal has a number of meetings planned, and thinks the Bologna Prize nomination has already led to more attention and meeting requests than she would have otherwise received.

She was so surprised to be nominated that she triple-checked the list, certain Monsieur Ed’s inclusion must be a mistake. It wasn’t, and she already has two and a half days worth of meetings booked despite only deciding to attend at the last minute. Picard says her main objective in going to Bologna is to create relationships with other like-minded publishers.

Many attendees are expecting the fair to be a little smaller than usual, with publishers from Asia and Australia less likely to attend due to ongoing COVID-19 travel restrictions or quarantine requirements.

But a slightly smaller fair holds the promise of even more serendipitous encounters and discoveries.

“I have some breaks in my schedule, so it’s also going to allow me to go around and take a look at other publishers,” Brunsek says.