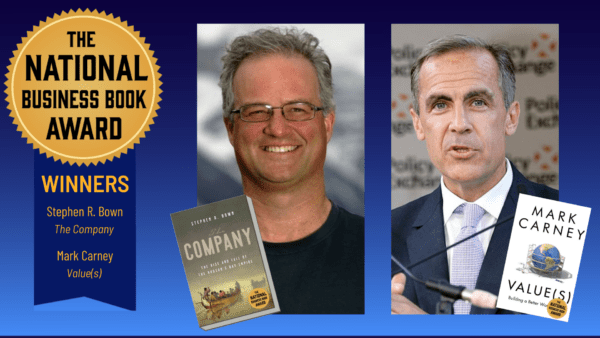 For the first time in the 36-year history of the National Business Book Award, two books have been named winners of the $30,000 award.

Stephen R. Bown won for his book The Company: The Rise and Fall of the Hudson’s Bay Empire (Doubleday Canada), and former Bank of Canada governor Mark Carney won for his book, Value(s): Building a Better World for All (Signal/McClelland & Stewart).

Jury chair Peter Mansbridge said there were twice as many submissions for this year’s awards than seen in previous years. “2021 proved to be a banner year for Canadian business writers and thinkers,” Mansbridge said in a release. “Through the bold ideas presented in these exceptional published works, this year’s finalists clearly demonstrate how Canada plays a leading role in navigating — and solving — an abundance of complex economic, social and scientific challenges facing our world.”