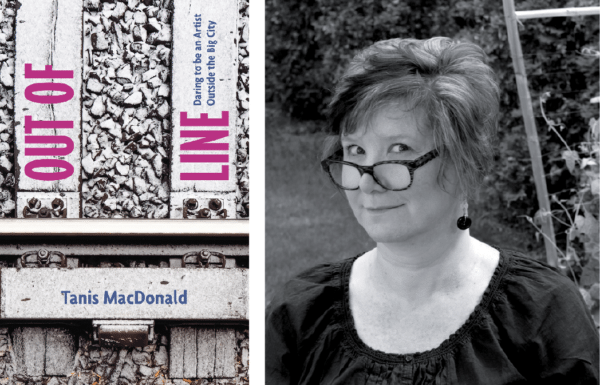 Do you live in a major urban centre? Take this short test. You are giving a reading from your latest book at your local bookstore, and you invite a friend who lives an hour’s travel away. If your friend says instantly, “Awesome, I’ll be there,” chances are you live in a Big City. If your friend says, “What? Come all that way? On the highway?” then you probably live in a smaller city or town and belong to a group I call “out-of-line” artists.

Small centres have their advantages. A recent study conducted by researchers at McGill University and the Vancouver School of Economics found that people who lived in communities outside large urban metropoles cite a higher degree of happiness and life satisfaction. The researchers suggest strong community ties, lower housing costs, shorter commutes, and more time spent in nature comprise major contributors to this satisfaction. The undeniable lure of Big City life comes with a financial hit and sometimes a corresponding emotional price: separation from family, community, culture, and a hundred other factors that contribute to day-to-day liveability.

But life in smaller places is not necessarily idyllic, no matter how close you live to your workplace or to a forest. When it comes to pursuing an artistic practice in a small centre, the lower cost of living runs smack up against the siren song of Big City sophistication. There’s no denying that large urban centres give beginner artists greater access to art and opportunities. But what if moving to the Big City is not an option?

I’m a small-city prairie person who has lived for more than a decade in Waterloo, Ontario, where talk about tech industries is constant. Less known outside the region are parallel conversations about the arts, championed by people who have chosen to live in this small city. Since moving here in 2006, I have become aware that access to the arts – even talk about the arts – is rationed out in subtle ways according to location and perceived notions of class. No one says explicitly that art only happens in the Big City, but think of the many times you’ve heard that if you want to be a writer, all the literary action is in big urban centres.

In the early days of the internet, the ability to send information instantly and cheaply changed the writing world. But it didn’t change the need for artistic community, especially to serve writers who are just starting out, and for irreplaceable demonstrations of how to build a literary practice.

When I first moved to Waterloo to teach at Wilfrid Laurier University, it was a revelation to hear the concerns of novice writers. “How do I write?” they asked. “How can I be a writer if I can’t move to the Big City?” They wanted real talk about how to become a writer when you have a rural background and come from a working-class family, and while raising kids, without the money or time to take an MFA degree, while making student loan payments, and/or while working a perfectly good non-arts job to pay bills. Their questions exposed the hollowness of the all-curation-all-the-time world, where it seems as though everyone can blog and Instagram and YouTube their art and where social media is touted as a democratizing force. Sometimes it is, but if we refuse geographical relocation as a romantic act that “makes the writer,” we can give in-person, on-the-ground relationships between writers (and other artists) room to grow. For the people who ask, “How can I make art in this place?” the first answer needs to be: look for the artists around you.

What if we practised creative community not in some unseeable future with imaginary circumstances, but right here, gloriously out of line? Smaller centres all over Canada practise this principle, and sometimes have to fight for it. Think of Jael Richardson’s burgeoning Festival of Literary Diversity in Brampton, Ontario. Think of Janice Lee’s documentary The Legend of Sing Hey in which Lee’s cross-Canada quest for BIPOC artists living and making art in small centres yields up all kinds of skilled writers and performers.

But why had my students, the people most in need of this good news, missed out on it? One reason: I had not been talking enough about it. Makers in out-of-line communities need to make our practice evident and public; we need to defy relocation as a requirement for making art. When I moved to Waterloo, the irony of ending up in a city even smaller than the one in which I grew up was not lost on me. But irony is useful, if we let it be, and the out-of-line place is a great leveller of ego. As the old saying goes, you can get there from here, but maybe more importantly, “there” is actually here. You don’t have to leave to be the writer you are.

Tanis MacDonald is the author of Out of Line: Daring to Be an Artist Outside the Big City (Wolsak & Wynn, 2018) and three books of poetry. She was the recipient of the Robert Kroetsch Teaching Award in 2017 and the Faculty of Arts Teaching Scholar Award at WLU in 2018. She is also a co-editor, with Rosanna Deerchild and Ariel Gordon, of GUSH: Menstrual Manifestos for Our Times (2018).

Tags: Out of Line, Tanis MacDonald