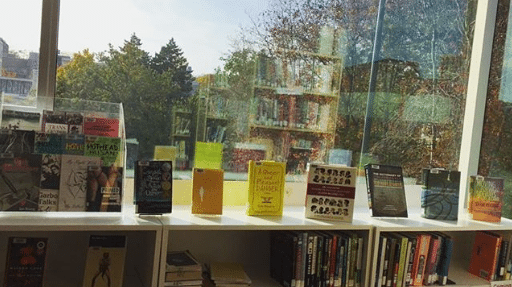 An LGBT volunteer-run library collection that began in Vancouver in 1983 has found a new home at the University of British Columbia’s West Point Grey campus.

Out on the Shelves, which opened to the public at the end of October, houses a book collection that has grown, shrunk, and taken many forms over the decades. Starting as the Gay Library on the city’s Davie Street, it later became the Gay and Lesbian Library, and then the LGBT Library, housed by the LGBTQ+ community centre Qmunity in Vancouver’s west end for several years. The collection was forced to move in 2015 during some changes to the centre’s space, eventually being culled by about half to fit into a number of temporary homes, including personal garages. Out on the Shelves co-coordinators Casey Stepaniuk and Lucinda Murray took over from those who were managing the move just as a space in the UBC students’ union was secured with student-run resource group Pride UBC.

“We had this small room piled high with boxes of books, and were tasked to make it back into a functioning library. It took us quite a while,” Murray says. “We’re mostly run by students who are in or who recently graduated from library school, [which means that] we’re studying and specializing in the field. That’s been really useful in rebuilding the library and creating a space where we can connect people with a range of LGBTQ2IA+ stories and recommendations.”

The duo says the library is focused on offering popular, contemporary titles rather than scholarly works on LGBT issues, which is a niche the university library already caters to. “Our mandate is to focus on books for LGBTA2IA+ people themselves as subjects, not the study of them as objects,” Stepaniuk says. With this in mind, the collection is comprised of fiction, non-fiction, DVDs, and a small number of reference books, with “an emphasis on patrons being able to see themselves in the books’ content. … The concept of own voices is very important to us.” The team hopes to compensate for a lack of queer and trans materials in Vancouver, and boast a number of rare, old, and small press titles, as well as books for “pleasure reading,” which university libraries do not specialize in. They also hope to acquire more titles by and about people of colour; asexual/romantic, intersex, two-spirit, and bisexual people; and intersecting identities, like disabled persons.

“Since the library as we inherited its stewardship was entirely donation-based, there are gaps in our collection that we’ve been filling as we prepared to open and are eager to continue filling as we get into the swing of things,” Stepaniuk says.”We want to ensure the beautiful diversity of our communities is reflected in the library and that everyone in LGBTQ2IA+ communities feels welcome and represented.”