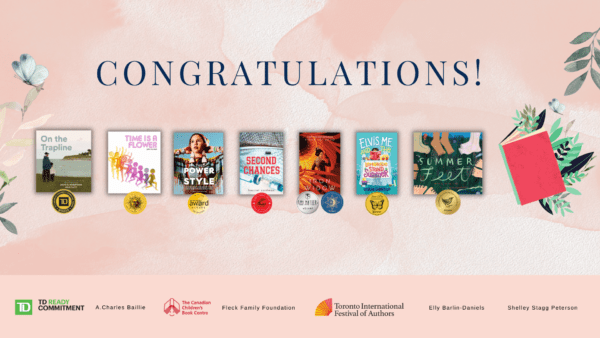 On September 29, the Canadian Children’s Book Centre (CCBC) announced the winners of the 2022 CCBC Book Awards at an in-person ceremony held at Harbourfront Centre and presented in partnership with the Toronto International Festival of Authors (TIFA).

The TD Canadian Children’s Literature Award and $50,000, which is the largest cash prize in Canadian children’s literature, was awarded to On the Trapline by David A. Robertson and Julie Flett. Tundra Books, the winning publisher, received $2,500 for promotional purposes, and $10,000 will be shared among the four remaining finalists.

The eight English-language winners are:

“During the COVID-19 pandemic, books have been a source of comfort for so many children. When schools and playgrounds were closed and holiday festivities were cancelled during lockdowns, books sparked our children’s imaginations, introducing them to new ideas and places,” said Sarah Sahagian, executive director of the CCBC in the press release. “If there is one theme that connects all the books that were celebrated tonight, it is possibility. Whether it’s a non-fiction work on the power of fashion to reclaim marginalized cultures, a joyful celebration of barefoot summer days, or the moving story of a grandfather and grandchild who revisit their family’s trapline, these books provide readers with a window to a vast and diverse world.”

The shortlist for the Prix TD will be announced on October 26 with the winners set to be revealed on November 16.