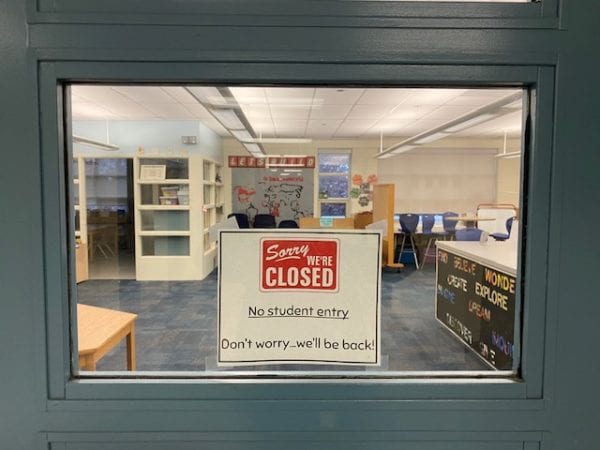 As kids head back to class this month, there is one room at school that remains off-limits to students. There are closed signs on the doors of school libraries across the country, due to public health concerns about kids sharing materials – and in some instances the space is being used as an extra classroom to facilitate smaller class sizes.

“It’s tough for us teacher-librarians,” says Jennifer Byrne, who works in an elementary school in the York District School Board. “But what will be tougher is when the kids come to school and see the library closed. I just have a feeling it’s not really on their radar yet – it’s not one of the questions parents are asking. They take for granted that there will be K-8 library programming – and that’s not going to be the case this year.”

Byrne is one of many teacher-librarians that have been redeployed this fall, and given their own classrooms to teach. “We understand it’s about lowering class sizes and yes, that’s the priority,” says Byrne. “But our government should be funding education so that we don’t have to choose – the teacher-librarian is an essential role in schools that should be maintained.”

School libraries are now referred to as library learning commons in Canada, recognizing them as the physical and virtual collaborative learning hub of the school, and those who work in them do a lot more than check out and reshelve books. “They’re the innovators in schools, the ones on the cusp of new ideas,” says Maureen McGrath, president of the Ontario School Library Association. “They’re the ones who have the space and the time to collate and curate, and bring those ideas to the classroom teachers who are so busy with their own full curriculum.”

The OSLA recently sent a letter to the Ministry of Education and the province’s school boards advocating for the role and detailing all that they do. This includes providing equitable access for resources, curating materials to support anti-Black racism, and inclusion and diversity learning in schools. And in a time of increased remote learning, they provide invaluable access to and instruction in education technology, and are the ones who are making sure schools and teachers aren’t violating copyright laws and agreements.

There’s also the role they play in students’ success. Studies have shown a correlation between full-time, qualified school librarians and  higher language arts, reading, writing, and math scores – as well as fostering in students a more positive attitude toward learning. “My feeling is that school libraries and their staff have never been more needed,” says Anita Brooks Kirkland, chair of Canadian School Libraries. “In these really weird times, that are fraught with misinformation, having an information literacy component in schools is so critical. That’s where the teacher librarian has the expertise and can partner with other teachers to integrate that into learning.”

This year, Byrne won’t be able to provide any of this kind of support to her colleagues. And there’s one area in particular that she’s really worried about. “Teachers look to us as literacy support, to plan the literacy program. And this year it’s especially important as kids are coming back with a deficit. They’ve been essentially without school for six months. How am I supposed to tell these teachers, ‘Sorry, that’s not my job anymore?’”

She is also devastated about not being able to add to her collection this year. Byrne spent the weeks before school taking all the books from the library shelves and packing them in bins to go into classrooms so kids can have access to reading material. But there will be no time (and possibly no budget) to run the Forest of Reading program and take part in I Read Canadian Day, nor to research and buy new books to keep the library current. “With all that’s been happening in the world,” says Byrne, “now more than ever we need to fill the inclusion and diversity gaps in our collection.”

In British Columbia, school libraries are meant to open in stages, and many districts are making decisions based on when they feel comfortable to do so. For the most part, teacher-librarians in elementary schools will take their programming into the classrooms. And in many secondary schools, students may come to the library to get books, but not to study or hang out. In B.C, teacher-librarian roles are protected under a collective agreement that ensures a ratio of 702:1, “but the reality is that many non-enrolling teachers are finding themselves pulled to cover teacher shortages,” says British Columbia Teacher- Librarians’ Association president Kristie Oxley.

In Saskatchewan, every school board is making their own decisions but many schools don’t even have teacher librarians any more as a result of cutbacks that took place three years ago. Similarly, in Manitoba there are divisional guidelines, and often schools are making decisions about libraries that work best for them.

Quebec has officially made it a school-by-school decision. “Some schools are closing their libraries for the first few weeks to make sure the whole school team and the students feel more at ease with the new realities before adding the library to the mix,” says Julian Taylor, a librarian from the educational services department at the English Montreal School Board. “In some cases, in order to provide physical distance between teachers, especially in smaller schools, libraries have been converted to staff rooms.”

Teacher-librarian Jonelle St. Aubyn is one of the lucky ones, as both she and the library tech she works with are keeping their role at a Peel secondary school. “I won’t be hosting any students in the physical space,” she says. “But my intention is to still provide almost the same level of programming, whether it be virtual or me going to classrooms.”

St. Aubyn will continue to put out her weekly newsletter which details, among other things, equity and anti-Black racism resources, Indigenous education support, and LGBTQ2S+ support. She’ll also hold virtual author visits this year with Waubgeshing Rice (Moon of the Crusted Snow), Sabina Khan (The Love and Lies of Rukhsana Ali), and E. K. Johnson (Exit, Pursued By A Bear). “It’s a negative that we have to go virtual, but there’s a positive aspect in the fact that we’re bringing these authors to a wider student audience,” she says. “When we host in the library, we only hold up to 100 kids. We’re just trying to look at the benefits; for example, virtual visits are less expensive so we can bring in more authors as well.”

St. Aubyn feels for her TL colleagues in the other boards, and calls the decision by the TDSB to redeploy all library staff a disservice and short-sighted. Meanwhile, educators across the country can’t help wondering what this will all mean post-pandemic. The official word from the TDSB, sent to Q&Q upon request for an interview, stated: “As part of the TDSB’s return to school plan, all elementary school library staff have been reallocated to classrooms to support smaller class sizes across the board. While these staff play an important role in our schools, the health and safety of our staff and students is our first priority.”

But those in the school library community fear that the libraries may not open again, that it might be seen as a future cost-saving measure. “We can’t forget what this space provides,” says McGrath. “It’s a safe space for a lot of our students. It’s the hub of the school, offering community building, mental health supports, and social-emotional learning. We feel deeply the necessity for it in both elementary and secondary schools.”